Following on from my post Traversing Transversality, I would like to provide an example of schizocartography as it appears in the space of St George's Field, the University of Leeds cemetery. 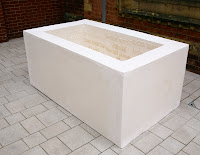 For her BA project in the School of Design, Charlotte Deponeo took casts of the text on the gravestones in St George's Field and rather than making further sculptures from these casts, the casts themselves were presented as the actual sculptures. One sculpture was placed outside the cemetery, but still on the university campus, near the School of Design, where it could then be stumbled upon by accident: indeed a number of us from Leeds Psychogeography Group found it on an organised walk one day.

This process of spatially decontextualizing the gravestones in the form of the cast (which looks like a kind of tomb), being placed elsewhere becomes part of a process of deterritorialization in the opening up of the (en)closed space of the cemetery to the outside. Félix Guattari explains that subjectivity is attached to territories, spatial and otherwise, which are ascertained in many ways, for example, through social and cultural determinations. (2008: 471:2) However "Territory can be deterritorialized, that is, it can open up, engage in lines of flight, and even move off course." (2008: 472) The words on the gravestone have also been decontextualized and reappropriated. Instead of only existing on their separate gravestones in situ in the cemetery, individual parts of the text of particular gravestones have been taken and placed together on the inside of the sculpture. This means they have been formed into a new semiotic assemblage: "Schizoanalysis [...] is interested in a diversification of the means of semiotization [...] it abandons the terrain of signifying interpretation for that of the exploring of assemblages of enunciation." (italics Guattari's) (2008: 395)

Charlotte has created an assemblage of enunciation in the form of her sculpture, by re-presenting the cemetery back to the university (and, in a sense, back to itself) by placing it in a different context, both spatially and materially: "The work of art, for those who use use it, is an activity of unframing, of rupturing sense [...] which leads to a recreation and a reinvention of the subject itself." (1995: 131) Guattari explains that this process of “recomposition” enables “a search for enunciative nuclei which would institute new cleavages between other insides and other outsides and which would offer a different metabolism of past-future where eternity will coexist with the present moment.” (1995: 90)

The schizoanalytic process involved in the making of the sculpture also has the function of bringing the past into the present and, in a sense, de-mythologizing it. Guattari explains what is happening in these situations: “Existential Territories become diversified, heterogenised. The event is no longer enclosed in myth: it becomes a nucleus of processual relay." (1995: 105-106) The dominant order of the institution becomes momentarily translucent, its image fades away and other histories are momentarily made available. The concept of myth was also significant to the Situationist International. In their critique of consumer culture they saw the city as being a mythologised space representing the hollow sign that appeared in the form of the spectacle. This meant that the city could then become a place where private desires were then played out in the public domain in a consumerist form. (McDonough 1994: 76) Guattari's schizoanalytic cartography helps reveal the myth of controlling aesthetics and enables a space for subjective desires to come into play. Guy Debord sees the powers employed by capitalism in urban design as applying processes to space in such a way as it become homogenised. (2005: 165 and 171) The landscaping of the cemetery could be considered to have resulted in a homogenised space, losing (hiding) its 'real' character and separating it from its origins.