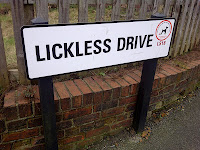 Almost opposite Lickless Drive (off Low Lane in Horsforth, Leeds) there is a metal gate with large boulders in front of it, deterring any entry by car. If you pass through the partly-open gate and walk a few yards down the slope, this is what you'll find: 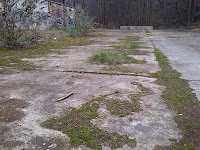 This liminal place looks like it is waiting for something to happen. The potential happening might be connected to the proposed Woodside Train Station which is meant to be located at nearby Woodside Quarry (although development seems to be on hold at the moment). In the meantime it is an interesting space with parts of buildings still remaining: 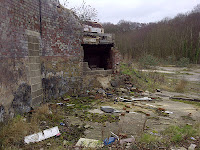 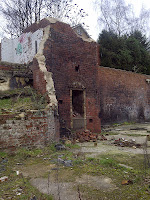 ...and, the compulsory graffiti, some of which looks quite old, as even parts of the bricks have fallen off in places, the graffiti clearly pre-dating this. 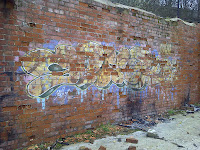 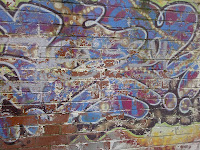 This area is huge and is easy to see on google earth. I'm wondering if maybe these were industrial buildings of some sort, and were never actually homes. But it's hard to tell. This area, to the East of Low Lane, does have a lot of industrial-type buildings still, with a mill just up the road, now turned into offices. It's difficult to work out what this building originally was, as I was standing at the roof level of it. 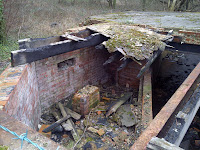 I like the image below. The three broken walls echo the slope of the land behind them. It's interesting to see that the broken edges of the wall have been filled over with concrete. 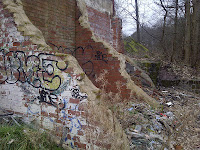 This is what the OED says about the word 'liminal':
a.gen. Of or pertaining to the threshold or initial stage of a process. rare.
b.spec. in Psychol. Of or pertaining to a ‘limen’ or ‘threshold’.
Cultural Anthropol. Of, relating to, or characterized by liminality.
1967 V. W. Turner Forest of Symbols iii. 77 The liminal condition between two periods of active social life.
Posted by Particulations at 17:28