Hannah’s Dress: A Very Slow Dérive Down ‘A Quiet Street in a Nice Neighbourhood’ 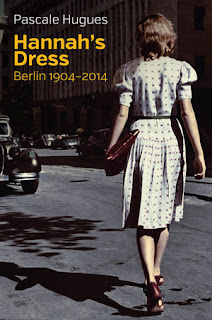 “It’s an ordinary street”
At the beginning of the year I was fortunate enough to receive a copy of this beautiful looking book in the post: Hannah’s Dress: Berlin 1904-2014 by Pascale Hugues (Polity Press 2017). ‘Is it psychogeography?’, I thought, ‘There is a picture of a woman walking in the street’. Upon further examination, it became clear that while it isn’t overt psychogeography (if there is such a thing), neither is it not psychogeography. It is the story of a street through the eyes of the author and the other street residents, past and present. So, in a way it is a very slow dérive of this Berlin street, albeit one that lasts 110 years and one that enters the homes and hearts of its residents.

Where’s the psychogeography bit?
By examining the material culture of a particular space, the book examines the history and aesthetics of place. While it does incorporate the opinions and emotions of others, it is also subjective in the way that psychogeography is: the differing individual responses to place (affect, if you will) are all valid and acknowledged as such. It also makes reference to popular culture, which is a common reference tool used by the psychogeographer, too (as well as telling you about the place under examination, it also orients the reader in regards to the psychogeographer who is writing).

Who’s the protagonist in the story?
The protagonist is two-fold, it is both Hannah’s dress and the street itself. I won’t spoil the poignant story of Hannah’s dress by revealing it here – but the book dedicates a chapter to it, which I would recommend. However, I will say more about the street as protagonist in the story, a character who is a hybrid of the people who have lived there during its history. This idea reminded me of Jonathan Raban’s Soft City (1974):


For at moments like this, the city goes soft; it awaits the imprint of an identity. For better or worse, it invites you to remake it, to consolidate it into a shape you can live in. You, too. Decide who you are, and the city will again assume a fixed form around you. (1983, 3)

Posted by Particulations at 14:26 No comments:

Hey You: Subjectivity and the ideological/repressive state apparatuses in Pink Floyd’s The Wall

This chapter examines the representations of Louis Althusser’s state apparatuses in the album lyrics and film of Pink Floyd’s The Wall. By considering Althusser’s discussion on the repressive apparatuses (for example: the army and the courts) and the ideological ones (such as the family, education and communication), the author critiques how, in The Wall, they operate on the subjectivity of the protagonist Pink and how this leads him to an existential crisis.

In his 1970 essay, Ideology and the Ideological State Apparatuses, Althusser provides us with a useful allegory to explain how the individual becomes a subject by offering us a situation whereby a person in the street is “hailed” by a policeman. “’Hey, you there!’”, the shout rings out, and the hailed person turns towards the call: “By this mere one-hundred-and-eighty-degree physical conversion, he becomes a subject” (Althusser 1970). However, Althusser explains that the individual is “always-already” a subject and that “ideology has no outside”, providing us with the example of the child in the womb who will be assigned the surname of her/his father even before birth (ibid.).

In The Wall we are not only taken through Pink’s life in flashback, but we are also made aware of the various repressive and ideological structures that have formed him as the individual we see in front of us. The Wall provides us with an insight into Pink’s psyche, making connections between the state apparatuses and their influence on him. Pink’s journey – his attempts to unshackle himself from the apparatuses and his ways of coping by creating repressive structures of his own - demonstrates the tension between conformity and freedom, leading the viewer/listener to question if anything that resembles a free subject can ever exist. This chapter discusses Pink’s subjectivity in the context of these apparatuses in regard to ideological recognition and the consequences of a rejection of that interpellation.

This chapter discusses the musical compilation series Psy(co)motion in the context of a schizocartographic analysis. It introduces the set of psychogeographically-oriented CDs within the mix-tape/CD phenomenon while situating it as a form that challenges ossified systems of power. Considering concepts such as aesthetics and affect, the mix CD series uses Félix Guattari’s theories concerned with production, singularization and reterritorialization. The chapter goes on to discuss whether Psy(co)motion manages to successfully recuperate itself through the molecular creation of the object, and via its virtual and physical dissemination.


Creating a Situation in the City: Embodied spaces and the act of crossing boundaries

This chapter addresses the history of what appears under the general term of ‘urban critique’ in its many incarnations, such as the flâneur, psychogeography, place-hacking, DIY urbanism, guerrilla urbanism and urban exploration. Going back to the late 19th century flâneur of the Paris arcades, there is a lineage of urban critique characterised by the act of placing one’s body into the space under examination as a way of understanding the dynamics that operate on both a material and abstract level. Urban space is a mediated space that enables a form of reflexivity to take place when the individual engages with it in a critical way. This affective process allows a form of rewriting of the space to occur, such that it is momentarily changed to fit the subjectivity of the specific individual who is placing it under scrutiny. This process can be undertaken and expressed in multiple ways depending on the approach taken by the person or group. Nevertheless, what is consistent across these alternative methods is a challenge to the taken-for-granted view that urban space is just empty space surrounded by the built environment – something that is immovable, and yet also innocuous.

By providing examples of the different forms of contemporary urban critique, the discussion will focus on how some people actively seek to question the way urban space is manifest and why it appears the way it does. It will examine the methods used, the types of questions asked and the different outputs of the practices themselves. By providing examples of contemporary practices and forms of urban critique, this chapter will look at their underlying philosophy and will review how successful they are in their objective.

Book: The Routledge Companion to Urban Media and Communication
Posted by Particulations at 10:15 No comments:

Round About Town: a new book by Kevin Boniface 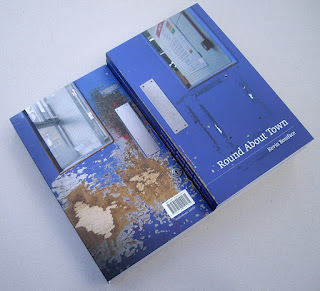 Round About Town was almost eight years in the writing: the accumulation of noteworthy observations made in the course of delivering the mail in the West Yorkshire town of Huddersfield between August 2010 and February 2018.


Further down the road I got talking to the woman with the low maintenance hairstyle and the perhaps inadvisable vest top with no bra. She was telling me about the house she used to live in when she was younger. “Where was that?” I asked. She waved an enormous arm in the vague direction of half of Huddersfield and said, “You know, number 23 do-dah”.

I began making notes about my environment in the late 90s when I joined the Royal Mail. Walking the same streets at the same time everyday gave me a new perspective; things were changing and I didn’t want to miss them: hats, bathrobes, children’s names, fashions in dog ownership, garden ornamentation and the accrual of patina thereon, the comings and goings of migratory birds, the taxonomy and distribution of litter, the degradation of animal faeces, Cars - Mr Briggs alone changed his car three times in one 12 month period during 2003/04...


Mr Briggs pulls up to tell me he’s off to Oldham today. He pauses, then says “Actually, I tell a lie, I’m off to the office, then to Meltham and then to Oldham. I’m working on the precinct there, it’s a right bastard to park”. That’s all he says, then he gets back into his Suzuki Carry and drives away. 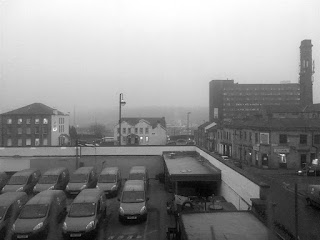 I wanted to make sense of all of this.


There are unencumbered and determined grey-haired men in navy blue fleeces pounding the streets. Teeth gritted, they march up hills, arms outstretched for extra balance along uneven nascent desire lines—past the stalled mums with their hoods up against the drizzle, pushchairs and retrievers in one hand, they reach out for their straggling toddlers with the other.

In an attempt to eradicate any prejudices, I employed various techniques. I made lists of observations at preordained times of the day, I avoided adjectives and adverbs, I even attempted meditating on the day’s events in an attempt to clear out the crap and get to the REAL: the REAL tangerine in the gutter on the Tuesday after the storm. I don’t know if I was doing it right or whether I was becoming so open-minded my brains had fallen out but I carried on, honing and tweaking. I made films at random, took photographs, made drawings.

I was researching something or other. 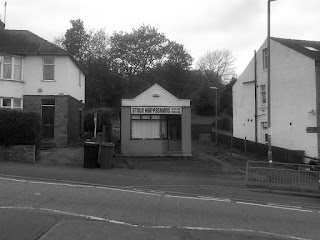 In 2010, a mate of mine, the artist Jared Szpakowski had started a blog ‘to keep his eye in’. He’d resolved to post a picture every day for a year. This seemed to me the perfect medium for what I was doing; how better to document the cumulative effect of everything on everything than by building up an accumulation of blog posts?


Next door, a three-foot-high pile of rubbish has accumulated in the garden and there are now fourteen sycamore saplings growing from between the joints in the cracked concrete paving flags. On the drive, the old Vauxhall Vectra has six nodding bulldogs wearing cross of St George T-shirts arranged across its parcel shelf.

Recently, I’ve been working with Uniformbooks to publish Round About Town, a beautiful print version of the blog, it came out in March and I’m very proud of it.

Kevin Boniface is an artist based in Huddersfield, West Yorkshire. After graduating in art and geography in 1993, he joined the Royal Mail as a postman which has influenced his artwork ever since. Over many years, he has also produced zines, exhibitions, artists’ books, short films, audio recordings and live performances. His previous publications include Where Are You? (2005) and Lost in the Post (2008).
Posted by Particulations at 10:47 No comments: