Where the Garment Gapes: The Slit Aesthetic and Jouissance in Fashion 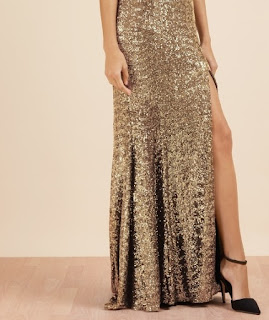 This semester, Philippa Jackson - a guest lecturer for my undergraduate unit, Fashion and Society - introduced me to the term “slit aesthetic” for the first time. The term was coined by Maureen Turim in her article ‘Fashion Shapes: Film, the Fashion Industry, and the Image of Women’. Turim describes the slit aesthetic as being a gap in women’s clothing that reveals the wearer’s skin, in particular the “neck, shoulders, back and breasts” (1983). While Turim’s discussion focuses on the representation of female actors in a specific moment in Hollywood film history, I would like to take up her brief discussion on desire and how this relates to the work of Roland Barthes in his own analysis of desire, wherein he uses a similar example. 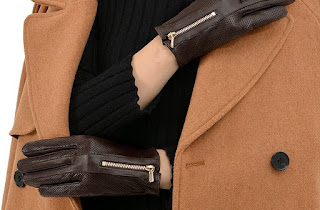 He describes this process as “the staging of an appearance-as-disappearance” and explains how an opening reveals something that attracts the subject by creating a kind of window (ibid.). This offers a taste and yet conceals so much more. An obvious contemporary example would be the flash of a woman’s leg appearing through the split of a dress. What is conceals alludes to a promise. This may not be ‘a promise’ in the vernacular sense of the word, but it is not totally dissimilar: what is concealed, though not visible, is suggested and it is the desire that this instils in the subject, and the subsequent response, that we can describe as jouissance.

In terms of the slit aesthetic, Turim sees the desire as being oriented in the male gaze, but she also explains that this gaze becomes fetishistic in that in these instances the film’s editing appears as a “cutting back and forth between the gazing male and the female body he looks at” (1983). This fetishisation then turns this slice of flesh into an object which, hence, stands in for the whole female. However, Barthes’ interpretation is different. Barthes explains how it is the “seam” which is erotic (1975, pp.7-8). It is the boundary, the join, the incision that disrupts normal textual flow and opens up a domain of polysemy. But this space is required to remain in abeyance in order for bliss – jouissance – to remain. In other words, and as it would be for Turim’s male audience, they will never ‘have’ the female actress.

In her article 'Beyond the Jouissance Principle' Jane Gallop says: “If jouissance is celebrated as something that unsettles assumptions, it becomes ineffective when it itself settles into an assumption.” (1984, p.112). The condition of the space of bliss relies on the lack of conjecture. Assumptions, knowledge of the outcome, and emotional investment in the conclusion avert jouissance. Bliss continues until the subject 'knows'.

In A Lover’s Discourse [1977] Barthes explains how the lover’s absence can be manipulated. He describes it as an “active practice” (1979, p.16) in which the not knowing of the whereabouts of one’s lover creates doubts and desires: “This staging of language postpones the other’s death” (ibid.). Barthes explains that “to manipulate absence is to extend this interval, to delay as long as possible the moment when the other might topple sharply from absence into death.” (ibid.).

While, Turim’s example sees the wearer of the slit aesthetic as representing the “phallic woman” (1983), Barthes sees that gap as jouissance and plays with the space in which the lover has not yet returned by extending the interval: when will the lover return or might it be that the lover never returns… 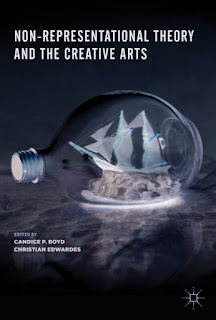 Edited by Candice P. Boyd and Christian Edwardes, Non-Representational Theory and the Creative Arts has just been published by Palgrave MacMillan in 2019.

Below is an abstract for my own chapter in the book - a photo essay - 'Psy(co)motion: Anti-Production and Détournement in Affective Musical Cartographies'. And below that is a list of contents for the book:


This chapter discusses the musical compilation series psy(co)motion in the context of a Guattarian analysis. It introduces the set of psychogeographically-oriented CDs within the mix-tape/CD phenomenon while situating it as a form that challenges ossified systems of power. The chapter goes on to discuss whether psy(co)motion manages to successfully recuperate itself through the molecular creation of the object, and via its virtual and physical dissemination. 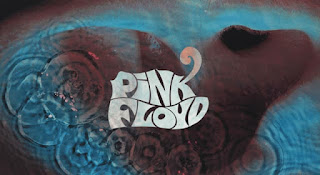 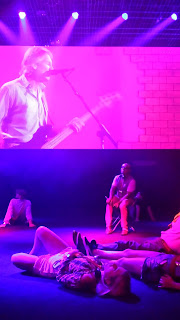 Note: I am hoping that I will have a chapter included in an upcoming book about Pink Floyd, although it will be about the album and the film The Wall. You can read more about it here.
Posted by Particulations at 17:13 No comments: