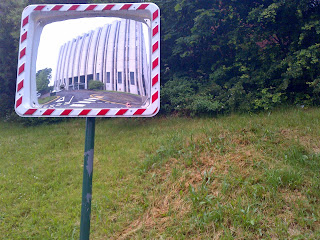 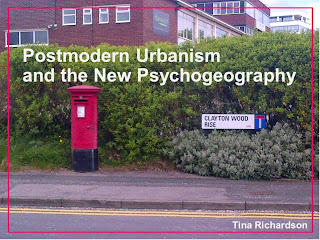 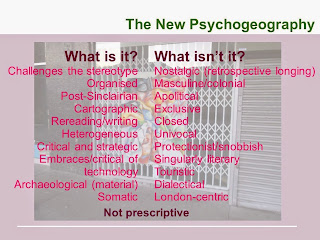 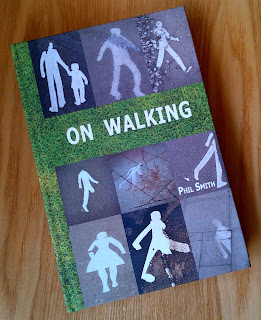 While I’m a psychogeographer and female, I don’t classify myself as a feminist psychogeographer per se. This doesn’t mean I don’t carry out a feminist psychogeography but rather that I don’t use feminist theory directly in the analysis of my practice or the urban spaces I explore. It is my intention to address this at some point in the future (and I have been thinking about looking at in relation to ‘dress’ and/or ‘safety’). However, in the meantime I would like to draw your attention to Phil Smith’s latest book On Walking...and Stalking Sebald (Triarchy Press 2014) and his chapter ‘Women and Walking’.

Smith opens ‘Women and Walking’ with this quote: “This is the big one around walking – so obvious and banal. And out of it and around it and if we grasp the centrality of it, then everything else can come from it” (p.160). This reminds me of the opening of my undergraduate module on deconstruction where the lecturer said, and I paraphrase: “All binary oppositions ultimately originate from female/male”. Therefore, understanding this dichotomy/dialectic is a fundamental one which helps explain how other work – which is what Smith is also saying about women and walking. 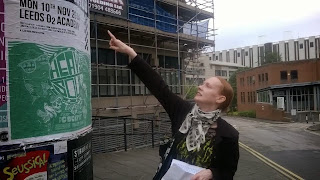 Smith’s chapter is very sympathetic to the woman walker, but not patronising. His experience of walking with hundreds of different people enable him to consider how space, and the culture and powers that influence it, operate on individuals. He quotes Dee Heddon and Cathy Turner’s essay ‘Walking Women: Shifting the Tales and Scales of Mobility’ where they discuss the absence of the female psychogeographer in postmodern urban space. He challenges this by citing a number of contemporary women psychogeographers, including myself and Morag Rose. However, he acknowledges that urban space has historically been the domain of the male, even though a shift is now occurring towards a feminist psychogeography.

Smith concludes: “Walking needs to put its own house in order, identifying those gross prejudices that it has inherited from its romantic traditions [and] until women are free to walk wherever they choose and without fear, any so-called ‘high enjoyment of going on a journey’ [Robert Cortes Holliday] will continue to be a reactionary illusion, a fluid prison in which some are more stuck than others” (p.164).