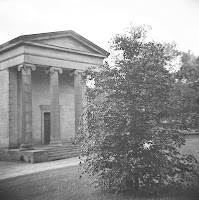 The chapel at the centre of St George's Field has an undercroft - or columbarium (a vaulted storage space, usually used for cremated remains) - which is no longer accessible from inside or outside the chapel. Despite this, on 23rd June 2011, during a Leeds Psychogeography Group walk, it was discovered that the outside 'wall' of the undercroft had fallen down in one place, revealing the inside. 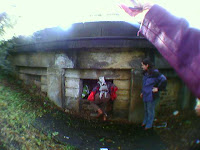 The particular dérive that Leeds Psychogeography Group were on that day was organised on the University of Leeds campus, and took us to St George's Field. One of the members of the group mentioned the undercroft and we decided to explore it, discovering on our arrival that one of the walls had fallen down in one place, revealing the inside. Near the entrance, on the inside, was a plaque. Unfortunately, we did not photograph the plaque or record a dictation of the text appearing on it at the time, hoping to return at a later date with the appropriate equipment. However, when I returned it had been closed up, by replacing the bricks with new mortar.

I contacted the member of Leeds Psychogeography Group who read out the plaque to us, a geography research fellow at the University of Leeds, Andy Turner. This is what he remembered:


The plaque, just in from the hole, mentioned a woman from Potternewton who died as a young mother. I think she was the wife of someone and they had an infant child that died some time shortly afterwards (this was mentioned lower down on the plaque). I can't quite recall the name of the woman at present or the dates or ages that I think were mentioned. I've some vague recollection of these details...

I also contacted the Estates Office at the university in order to ask about the plaque therein, and to see if there was any information held on it by Estates. This is the relevant part of the reply, which also makes reference to it being closed up again:

The above quote is an example of how hiding works in postmodern space in a response to administrative decisions (however, it is important to say that the original bricking-up of the undercroft goes back to the 1960s). But, also it is apparent that there are certain 'types' of people that are not welcome in the garden (the scare quotes surrounding 'undesirables' is part of the original email). One of the most troubling aspects of this closing of the undercroft is that it is now a piece of lost social history, since neither the Estates Office, nor Leeds Psychogeography Group, have the full information from the plaque. Also, while it is not clear what types of 'undesirables' are being referred to here (perhaps homeless people or maybe just inquisitive students), the space has been defined as a place that includes some people and not others, and these exclusions will involve those who are deemed not to be 'fit' as part of a wider notion of how the university should appear.

But despite this, the (re)discovery of the undercroft by Leeds Psychogeography Group provides a good illustration of how desire operates within the "subject-group". For Félix Guattari subject-groups are the opposite of subjected individuals or groups, in that they are groups or individuals who are not taken over by dominant systems of power, for example, the super-ego, or political power such as capitalism (2008a: 471). They form a line of flight which is able, in the moment, to traverse temporal and spatial boundaries at the same time bringing to light a piece of social-history which is buried within the territory.


Ecological praxes strive to scout out the potential vectors of subjectification and singularization at each partial existential locus. They generally seek something that runs counter to the 'normal' order of things, a counter-repetition, an intensive given which invokes other intensities to form new existential materials. (Guattari 2008b: 30)

They momentarily create a new space in response to the subject-group currently in attendance in the territory, accounting for their collective modus operandi, but also through their individual affective reactions. Guattari calls this process "transversality", which is a particular form of communication forming a bridge that takes unconventional routes between systems. (1995: 23-24) For Guattari these connections would not be dyadic (dialectical) nor triadic (Oedipal), and would, hence, operate outside of hierarchical power structures and semiotics.

The university's representation of the cemetery as a specific territory under its control, requires that it manages its appearance (spatially and abstractly) in a specific way in order that its incongruences are not left open to criticism. It does this through the management of what Guattari calls "transformers of signification – concrete machines.” (1984: 156) However, despite its attempts to do this, schizocartography, which opposes dominant histories, creates avenues which can be opened, revealing the voice of the other: "The cartography of abstract machinisms makes history by dismantling dominant realities and significations: they constitute the navel, the point of emergence and creationism of the machinic phylum." (Guattari 1995: 174)