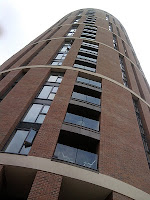 Prior to Saturday 26th of June 2010 I had only seen Candle House (the Granary Wharf Building) from the train as it left or entered Leeds railway station. However, after attending the Urban Stories event I was fortunate enough to be able to go inside and view Leeds at 360 degrees from its 21st floor.

Candle House is a solid-looking phallic-shaped set of apartments made from a warm-coloured brick. It has the appearance of being sculpted out of a solid cylinder, rather like those carved candles made from different coloured layers of wax. The staggered effect that appears every few floors gives the building a twisted appearance which adds both a feeling of movement but also prevents too much symmetry from making the building seem dull and lifeless.

As well as the 21st floor of Candle House, Urban Stories takes you to the Dark Arches. Joseph Collins regaled us with stories of ancient Leeds clans with punk hairdos; protracted battles between local Victorian Industrialists; and mythological rat people lurking in the network of tunnels off Neville St. The event is a must for anyone interested in local history, the ever-changing Leeds landscape and just great storytelling. Urban Stories is the last Saturday of the month on the same day as the Pannier Market.

For further information on Urban Stories contact Paul at paul.fallon@creativespaceman.com

Joseph Collins Pocket Universes
Posted by Particulations at 08:33 No comments: 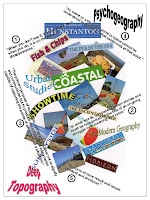 The above schizocartographic image was made by cutting photos of Hunstanton from various brochures and leaflets that advertise the seaside town. The pasted words and phrases are mostly popular terms that refer to seaside resorts, but were actually taken from the adverts of businesses or organisations located in the area. The other terms refer to the analysis and theory of urban space and have been added digitally. The quotes are comments on urban space by the following:

This 'map' has been named after the book Collage City by Colin Rowe and Fred Koetter. It has been created for the following project 'Reading the Arcades/Reading the Promenades'.
Please see my blogs on A Schizocartography of Hunstanton located here:
Part 1
Part 2

Sunday May 20th 2010. I set off from home with the intention of checking out the Kirkstall electricity sub-station (Leeds), which I had first stumbled upon in the summer of 2008.

Redcote Lane
The entrance to Redcote Lane is from Kirkstall Road. It is a strange space (part hinterland, part heterotopia) with a number of leisure pursuits represented. These are juxtaposed with the preservation area that runs by the river and this large sub-station which dominates the end of Redcote Lane. As you enter Redcote Lane you can hear the cracking-crunching sound emanating from the recycling centre on the right. You then walk over a really interesting green iron(?) bridge that crosses the river Aire: 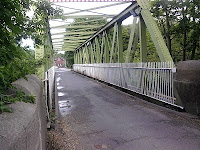 Past the bridge is a 'Fitness First' leisure centre and opposite is a small fenced-off part of the electricity sub-station. This is probably what the deep topographer Nick Papadimitriou would call an “adjunct” to the bigger system at the end of the lane. The golf course crosses the lane (between the first and second tees) and to the left there is a 'Goals' five-a-side football centre with the tagline “The Beautiful Game”. Most of the traffic in the lane (barely any, though) is for the leisure outlets.

Kirkstall Valley Nature Reserve
The gate at the entrance to the reserve on the right of the lane is designed by the children from Burley St Matthias School: 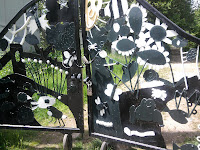 This gate takes you onto a path which stretches along the banks of the Aire and the Leeds and Liverpool Canal. I think it is possible the preservation area stretches as far as Kirkstall Abbey, but I have only walked part of it in the past, although from a window of an office on Kirkstall Road I have seen some interesting wildlife, including kingfishers. I spent the summer of 2008 working at this office in between my BA and MA. I used to gaze longingly into the river on hot days, thinking about arranging some kind of performative act which involved me donning a swimsuit and flinging myself into the Aire.

The Bridges
Right near the entrance to the nature reserve are two bridges. The first is a modern bridge used by the railway, bridge no. TJC3/22 (I am including the bridge references for the benefit of any train-spotters who like to search for this kind of information). Directly after that bridge, with barely any space in between, is the old, probably Victorian, bridge (TJC3/22A). A google search for these bridges throws up a Yorkshire Post article about water leaking from the base of the modern bridge, apparently threatening to flood the sub-station and 'Goals'. I really like the two bridges next to each other (the modern and postmodern). The Victorian bridge is particularly attractive and my photo does not do it justice: 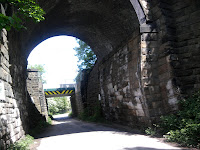 The Electricity Sub-Station
As you pass under the bridges the sub-station is straight ahead. My second visit to it was not as aesthetically powerful as my first. I think this was because it was a surprise discovery the first time around. Nevertheless, I don't want to understate how imposing it is. Its dominance is of a monolithic nature. 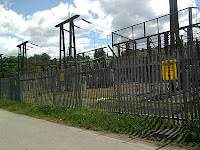 The sub-station is surrounded by greenery and it sits in a kind of enclave amidst the trees, grass and foliage. So, you have the sound of birds and the wind blowing through the trees, and also the hum of the station. Different parts of the site emitted different sounds. At one point there was a clicking sound coming from the machinery, which sounded rather like a cricket. 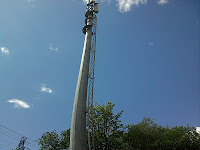 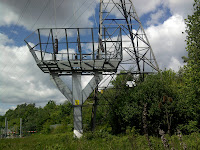 Signs and Notices
I took a few photos of some of the signs but as I got to the point of taking a photo of an interesting looking National Grid sign which was falling apart, I got the visit-from-security. I had noticed the portakabin and knew there was someone in there but thought I could sneak past to the gate and get the shot. But, no chance. Mr. Jobsworth, bored to death in his cabin, was going to allow me to 'make his day'. 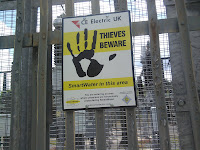 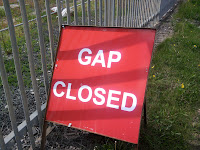 One of the signs had C E Electric UK written on it. Who, according to their website, are “...responsible for delivering electricity to over 3.8 million properties across the North East of England, Yorkshire and northern Lincolnshire.”:

On the same sign was another logo: SmartWater, which appears to be a police sponsored crime reduction initiative. I did see a police van drive around the area while I was there. Interestingly, they didn't see me as a 'threat', even though the security guard obviously did. What is SmartWater, you may ask? Well, their website explains that “...SmartWater is a colourless liquid solution that is simply dabbed onto the uneven surfaces of your valuables. It can be used to code all sorts of items such as jewellery, ornaments, electrical items and even your motor vehicle. Each bottle contains a unique chemical ‘code’ which is registered to you – conclusively proving ownership. It cannot be easily seen by the naked eye and is almost impossible to remove. The liquid glows under ultraviolet light making it easy for the Police to detect.”.

Concluding the Walk
After being caught by the security guard, I walked in the direction of the exit and I think the guard thought I had left. But, I actually continued to walk around the sub-sation and take more photos. I found a caravan storage park and also, at the back of the sub-station I found a place that moored boats: 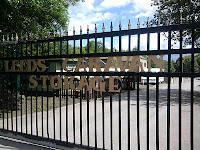 I then sat down on the grass to write up some notes. But after about 5 minutes I could see the security guard walking towards me and I made a quick getaway. When I was walking back home up the hill towards Burley the sky ahead of me looked dark and ominous, whereas behind, over the valley, the sky was bright, sunny and dotted with white clouds. The two photos below are from the same spot on Argie Road: the first towards Headingley and the second towards Kirkstall Valley. 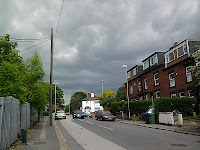 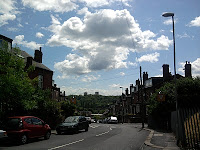 When I entered St Michaels Lane in Headingley I spotted a green and yellow pill on the pavement. I decided to name the walk after the pill, which turned out to be fluoxetine, aka Prozac.
Posted by Particulations at 09:07 1 comment: