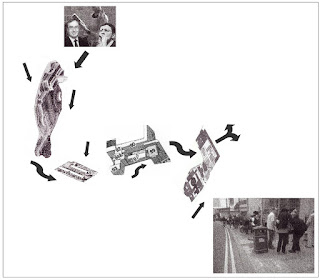 Please click here for the animated map (about 30 seconds long):
Axis of Exploration and Failure...

The above animated map is appropriated from the Situationist map by Guy Debord called Axis of Exploration and Failure in the Search for a Situationist "Great Passage" (1957). My map is based on the education-related strikes in 2011, in particular at the University of Leeds and Leeds Metropolitan University of that year. My own image takes sections from various University of Leeds maps and it includes a photo I took of the J30 strike in June 2011.

Here is how Tom McDonough describes Debord's original map in The Situationists and the City:


...a novel sort of map, or perhaps we might better say a work that stands halfway between the realms of art and cartography...This was one of a series called 'psychogeographic' maps he made of Paris at that moment, maps intended to chart "the specific effects of the geographic milieu, consciously planned or not, acting on the affective comportment of individuals." It in fact records one particular expedition...undertaken three years earlier by Debord and Chtcheglov (seen in their photograph at the top left) across their favored neighborhoods on the Left Bank, pictured in four collaged aerial photographs linked by arrows signalling various possible routes of entry and egress from one 'ambiance' to another. At the bottom right we find a poetic emblem of this voyage, a reproduction of Claude Lorrain's Seaport with the Embarkation of Saint Ursula of 1641 [see below]...The three elements together - along with the work's title, which characteristically unites a rather dry, technical description with the fanciful reference to the 'great' (that is, northwest) passage sought by explorers from Christopher Columbus forward in their quest for a more direct route to the east - produce an idiosyncratic plan of the city, one that privileges psychology as much as topography. 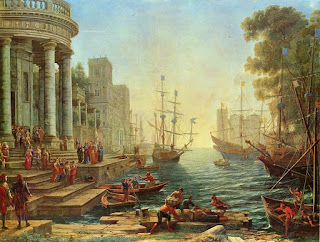 Seaport with the Embarkation of Saint Ursula by Claude Lorrain 1641

Below is the Situationists map. Apologies for the poor quality, I have scanned it in from McDonough's book, the original, of which, was already not a good rendition. 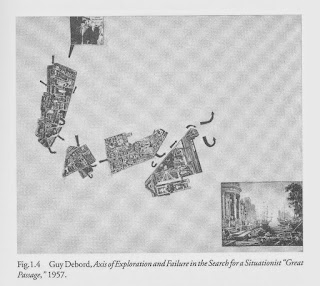 Axis of Exploration and Failure in the Search for a Situationist "Great Passage"
by Guy Debord 1957
Posted by Particulations at 14:55 No comments: