Creating a Situation in the City 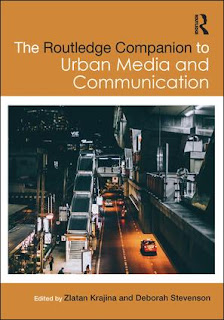 I have a chapter in the new The Routledge Companion to Urban Media and Communication edited by Zlatan Krajina and Deborah Stevenson (2019). The chapter is entitled 'Creating a Situation in the City: Embodied Spaces and the Act of Crossing Boundaries'. You can read more about the book here, and below is an extract from my own chapter which introduces a variety of urban interventions and walking practices:

This chapter will discuss the history of what appears under the general term of ‘urban critique’ in its many incarnations, such as modern day psychogeography, place-hacking, DIY urbanism, guerrilla urbanism and urban exploration. By examining the act of placing one’s body into the space under examination, we can begin to understand the dynamics that operate on us when crossing the material boundaries that appear in space, but also the symbolic ones that might be culturally formed in our psyche (such as ideas about who and who might not be allowed in certain spaces). Urban space is a mediated space that enables a form of reflexivity to take place when the individual engages with it in a critical way. The aesthetic and affective response that a person or group generates through the embodied process of the urban encounter, momentarily changes the space to fit the subjectivity of those placing it under scrutiny. While this process can be undertaken and expressed in multiple ways depending on the approach undertaken, what is consistent across these alternative methods is a challenge to the taken-for-granted view that urban space is simply a neutral space that happens to appear as ‘the built environment’ – something that is immovable, and yet also innocuous.

Urban critique, in whatever its form, provides an opportunity for the city to be examined at the micro level, through what Michel De Certeau describes as “spatial practices” which take the form of modes of resistance to an imposed way of life as it appears in “lived space” (1988: 96). These spatial practices allow one to question, and even challenge, the usual ‘rules of the highway’, such how we cross the road at a zebra or pelican crossing, or do not drive on the pavement.

By providing examples of the different forms of contemporary urban critique in regards to forming - what can be described as - situations, the discussion will focus on how some people actively seek to question the way urban space is manifest, ask why it appears the way it does and whether we are able to challenge its, seemingly, fixed materiality. This chapter will provide an overview of these approaches and their mediated relationship with the practices of everyday life in mediated cities...
Posted by Particulations at 14:00 No comments: