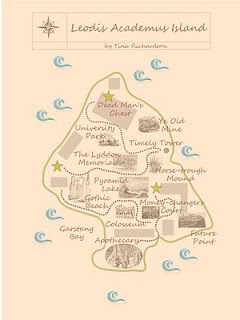 This map takes the border of the University of Leeds, as it appears on maps of the campus, and turns it into an island. The map shows some places that exist (e.g. the apothecary is the School of Medicine), some that used to exist but no longer do (e.g. the horse trough), and some that are fiction. It is a map of a treasure island; the stars highlight where the treasure is located.
Posted by Particulations at 14:59 No comments:

Walking Through The Mall 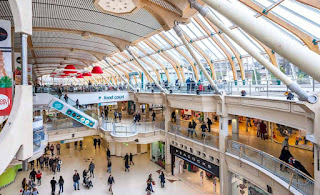 Upon entering the Mall I had the sensation of wanting to duck my head as if I was entering a cavern. Once inside my attention was immediately caught by Aha’s “Take on Me” being discharged from Virgin. To my right I saw three consecutive food shops and made a mental note to buy a Millie’s Cookie when I left - it was almost impossible not to be 'sold to' even though my purpose for being there was that of an observer, not a shopper.

Dance music was emanating from First Sport. Then, my attention was immediately caught by the orange livery of the Halloween products in the card shop on the left. To the right I noticed the flickering images on the television screens in the Sony Centre and I began to understand how people could use this experience as a way of not having to think about the more important issues of life. I looked to the left again and saw F Hind, the jewellers, and thought to myself “all that bling looks cheap and repulsive”.

I started to get the sensation of a pouring-forth of 'stuff' (something lacking substance) and that as subjects we are there to soak it up, gratefully. I found this simultaneously repellent and fascinating. I could sense the subtle underlying philosophy of the mall, along the lines of “this will make you feel better”, “this will fill the void in your life”, “this will make you attractive to others and increase your sense of self-worth”, being subtly whispered to the shoppers.

I had to negotiate the game zone placed in the middle of the avenue and could still hear the computerised bleeping sounds after I had passed. A man said to his son “No, you don’t do it like that…”.

I started to get the feeling of being a discrete unit of consciousness moving through a landscape and then suddenly there was an opening of space as I moved into the well-area where the escalators were situated. I started to feel dissociated. I wasn’t there to connect in the same way as the shoppers. I was aware that my purpose was different.

Claire’s Accessories was so pink all I could think of was those sickly-sweet sugar mice with string tails that I had as a child. The Disney shop looked just like Aladdin’s Cave. Ahead of me I noticed an exhibition stand organised by the Norfolk Criminal Justice Board and Victim Support.

Behind the exhibition stand was a grand sweeping staircase, which looked like it should belong in a stately home. I sat on the bench nearby and listened to the background hum. People’s distant voices sounding like the mall machinery. A child was playing. I heard high-heels coming closer and then passing me. Someone from the cleansing department came past and swept something up. A barely audible announcement came over the PA. The same child started singing. I notice that there were a high proportion of women with prams.

I started to feel disconnected like I was cocooned in cotton wool. The sensory overload had actually turned into nothingness, something meaningless and beyond recognition. I suddenly had no frame of reference and got the sensation of being sucked out of the material dimensionality of the mall into a space just behind it.

I left the mall and went to Millie’s. The cookie, like the mall, was sweet and seductive and left a slightly disturbing, lingering taste in my mouth.
Posted by Particulations at 08:28 No comments: