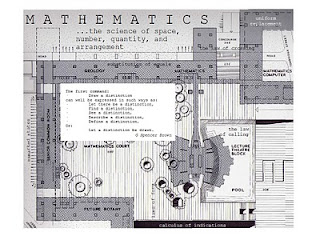 What I have attempted to do with this appropriated map is to generate a schizocartographic image that attempts to appear seamless with the original. A number of words and phrases have been added, in a similar style to the first, which may not be initially apparent. Most of the added text is from G. Spencer-Brown's text on the calculus of indications (boundary algebra) The Laws of Form (1969), for example: “the law of calling” and “unmarked states”. A highlighted box in the centre quotes a longer section from the book. Spencer-Brown's book, while about mathematics, is also philosophically influenced. He has been hugely important in the area of autopoiesis and second-order observation.
Posted by Particulations at 15:41 No comments: 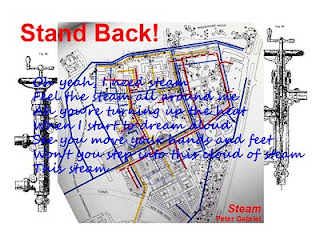 This map is based on a map from the Chamberlin Powell and Bon University of Leeds Development Plan (1963). The underlying map shows the proposed gas, steam and water pipes for the campus in red, yellow and blue. In order to produce an appropriated and subjective map (a schizocartography) of the original, I have superimposed some lyrics from Peter Gabriel's song Steam over the map and included some images of steam pipes downloaded from the internet.
Posted by Particulations at 15:39 No comments: 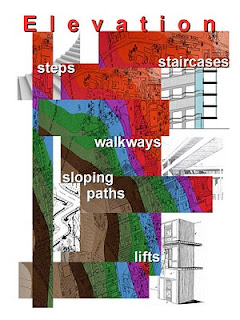 This image uses a map from the Chamberlin Powell and Bon Development Plan (1963) for the University of Leeds, which highlights the level of the ground on the university campus in different colours. The different elevations of land caused many architectural considerations when designing new buildings over such a vast area. I have added text and images to demonstrate some of the ways that these issues were dealt with.
Posted by Particulations at 15:37 No comments: 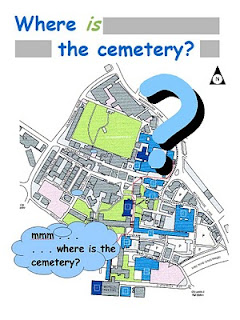 Tagg, John. 1988. The Burden of Representation (Basingstoke and New York: Palgrave Macmillan).
Posted by Particulations at 11:39 No comments: