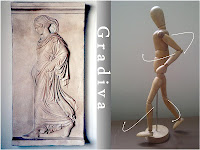 You may not be aware of Freud's text 'Delusions and Dreams in Jensen's Gradiva'. In this essay, in his usual microscopic style, Freud analyses Wilhelm Jensen's 1903 novel Gradiva, trying to tease out the latency inherent in the text-as-dream.

Being quite familiar with Freud, I hadn't considered him from a psychogeographical perspective until this essay was referred to me by one of my thesis supervisors. Here Freud psychoanalyses the behaviour of the protagonist of Jensen's fiction, Hanold. Perhaps his interest in the novel was sparked by a relief he had of Gradiva in his office (latin translation: the woman who walks), which you can see in my picture above. I have placed an image of the relief next to a photograph of an artists' mannequin that I have attempted to stand in the same position as Gradiva.

I haven't read the original novel (but it is on order now), only Freud's translation and specifically the references to walking, the gait and the footprints, which were of particular interest to me as a psychogeographer. Here are a few extracts by Freud, commenting on the protagonist in the story:

"But now he found himself confronted by an ostensibly scientific problem which called for a solution. It was a question of his arriving at a crucial judgement as to 'whether Gradiva's gait as she stepped along had been reproduced by the sculptor in a life-like manner'. He found that he himself was not capable of imitating it, and in his quest for the 'reality' of this gait he was led 'to make observations of his own from life in order to clear this matter up.'" (page 8)

"When they reached the Herculean Gate [...] Norbert Hanold paused and asked the girl to go ahead of him. She understood him, 'and, pulling up her dress a little with her left hand, Zoe Bergang, Gradiva rediviva, walked past, held in his eyes, which seemed to gaze as though in a dream; so, with her quietly tripping gait, she stepped through the sunlight over the stepping-stones to the other side of the street.' With the triumph of love, what was beautiful and precious in the delusion found recognition as well." (page 12)


Freud is fascinating. He always reveals so much of himself when analysing others. The projections (obsessions) of Hanold's he comments on in this essay, could likely be compared to Freud's own. Freud saw the original Gradiva in Rome, had a copy of the relief in his Hampstead office and then wrote an essay about Jensen's novel.

My second part of this blog will look at another 'psychogeographical' reference by Freud in The Uncanny. I will be providing my own analysis of Freud in this upcoming blog.

References:
The extracts of Freud's text are from Crossing Aesthetics edited by Werner Hamacher and David E. Wellbery (Stanford University Press 1997).
Posted by Particulations at 15:10