The Cherry Tree Dérive (or the Blue Fork Walk)

Sunday July 25th 2010 12.30pm. Tim Waters (neo-geographer extraordinaire) and myself set off for a University of Leeds campus dérive using this method to chart our route:

This blog is a subjective schizocartography of that walk, supplemented by Maurice Beresford's Walks Round Red Brick (a little gem I picked up at Kirkstall Bookshop) and relevant information found online. The book was written in 1980 by a professor who walked the campus with his dog Lulu. It is a truly psychogeographic text and a superb find as research material for my thesis. He apparently died in Leeds on December 2005 and was a historian who specialised in writing about lost villages:

Here's a really nice recent picture of Maurice Beresford. It seems he very generously left £140,00 to the university for scholarships:

Our walk began at The Packhorse on Woodhouse Lane, Leeds. We headed up Clarendon Road. While walking to this location I took a picture of the interesting water tower(?) attached to Henry Price Halls. I've been meaning to shoot it for a long time. It's a really interesting shape and from directly below has a spooky perspective which is quite unsettling and makes it seem precariously balanced: 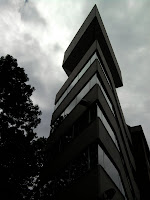 The Fairbairn House area was the first stopping point on our chart. As you can see from the blue plaque, Queen Victoria stayed there: 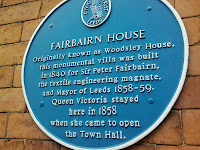 The house and related area was locked, as it was a Sunday, but I have walked around it before with the Film and City students. It has an interesting grass courtyard at the back. I didn't take a picture of the house, but there's a nice one here:

Fairbairn House is a listed building. Here is the information on it in that regard for the architecturally-minded reader (the site quotes Beresford):

Fairbairn House used to be called Woodsley House and also Albert Mansbridge Hall but was owned by Sir Peter Fairbairn (according to Maurice Beresford's text). Here is the statue of Fairbairn.

It seems, like myself, the above blogger has also noticed the current fashion for cones on the heads of our Leeds statues. He is right, Wellington has a matching cone to go with his red wellies.

Below is an interesting street sign painted on the wall of Victoria Street, which is quite near Fairbairn House:

We had a good look at the new Charles Morris Hall. The area was locked at the main gates and fenced off around the perimeter. The halls look just about finished and I imagine almost ready for the new semester. I particularly liked the coloured glass in the windows (green or red). We spent a while gazing through the gates: 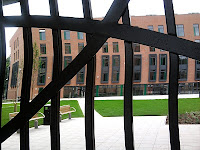 Tim started saying 'hello' to test the echo and we think this was what attracted the security guard over. He was very helpful and tried to answer all our questions. It was great to chat to a friendly security guard, rather than the usual 'jobsworth' type that one normally encounters.

Near Parkinson Court (aka Parky) there were two memorials. The first one was at the bottom of a tree which was dying. It was for Emily Francis Parker who died the 6th of April this year. She was almost 21. Her friends had put pink ribbons on the tree and written sweet messages to her. It was very touching and quite sad. 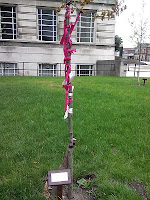 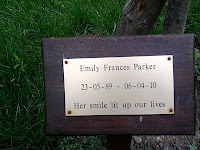 Very close by was a memorial for Parvathy Kengatharan. One fixed in the ground, as with Emily, and also a lovely memorial bench. Below is a close up of the plaque and also a picture of Tim sitting on the bench: 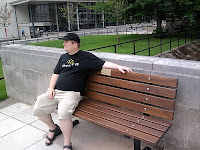 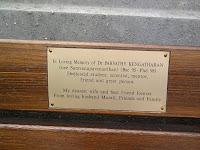 There is an online obituary for Dr. Kengatharan. She died at 38 – very young. Here is the tribute:

This was the first time I've had a proper look at the new childcare centre on campus. It has a Scandinavian look about it, with all the wood panelling. You can't see much of it in my photo below, so I've also provided an image of it during construction and an article from the university website: 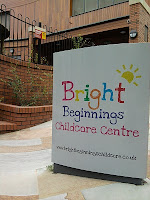 Bright Beginnings Get Ready to Shine

I know not many people do, but I love the 60s brutalist architecture. My favourite buildings on campus - from the Chamberlin, Powell and Bon period - are the Roger Stevens Lecture Theatre and the Worsley Building.

I'm really happy with this picture of Roger Stevens (as we call it, as if it is the man himself rather than a building dedicated to him): 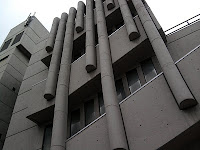 The piping effect on the side reminds me of a church organ. Apparently they do actually contain pipes of some sort (maybe air conditioning) and are not just for aesthetic effect. Maurice Beresford's walks do not seem to cover the precinct area. Maybe he doesn't enjoy the modernist architecture as much as I do.

The Worsley Building is a behemoth. I love it. It is like a massive chunk of impervious concrete. On the campus map it takes up a lot of space and is clearly a giant even from the birds eye perspective of the map. The first time I went inside it I was rather disappointed. I went via the walkways and was not even aware of the point that I entered it. The second time I entered from the dentist school side: when you approach the building there is a moment where you step from the outside and enter its interior. Once inside it is very difficult to get any sense of what the outside of the building is like. 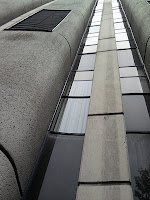 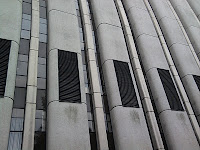 Another aspect of the university campus that I'm attracted to is what I like to pretend are the secret pyramids.

The first one is at the back of the union building. You can't get to it at the moment because of the building works. I have walked up to it before and looked into the room below. Apparently it was some form of common room but is now unused. I remember seeing old fliers lying around the ledge on the inside of the glass. 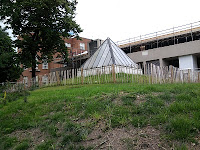 The second pyramid actually turned out to be two. From the far side of the Roger Stevens pond you can only see one. The first one hides the second one. They are much smaller than the other one and are made of plastic. Unfortunately, you can't actually see into the space below. 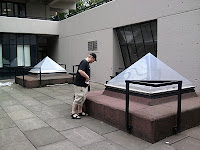 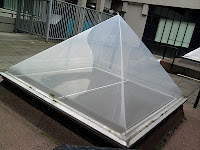 Maurice Beresford dedicates a chapter to Cavendish Road. My photo below is of the Presbyterian Church built in 1879. 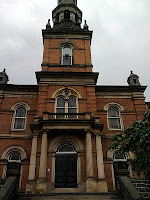 According to Beresford's text the church was converted to the Clothworker's Centenary Concert Hall in the sixties. I am going to include some of his text about the church here because it is very poetic and quite poignant:

“On a Sunday morning the empty streets allows the ghosts of the unco' guide Celtic exiles to come down the steps unobserved and walk to Hilary Place where pedestrianization has forced their grooms to wait respectfully by the pawing horses, impatient for home and their Sunday lunch of hay in the coach houses of Headingley Hill and Far Headingley.”

This is the topography of yesteryear, and Beresford can see its echoes in 1977 and 1978 when he wrote his text. This reminded me of The Ghosts of Oxford Street by Malcolm McLaren.

The Ghosts of Oxford Street

We forgot to pick up a found object of which we always name the dérive. However, Tim spent some time looking at the campus cherry trees - of which there are many - and picking the ripe cherries. At the beginning of the walk I thought about picking up a cherry stone but decided to wait till later on, then forgot. It wasn't till we were leaving that we realised we hadn't got an object. However, at the gate to my house I found half a blue plastic fork: the detritus of fast food that is the bedrock of student central (aka Headers).
Posted by Particulations at 13:41 No comments: 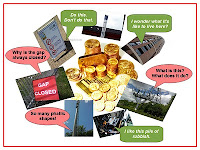 Schizocartography offers a method of cartography that both questions dominant power structures while at the same time enabling subjective voices to appear from underlying postmodern topography. Schizocartography is at once the process and output of a psychogeography of particular spaces that have been co-opted by various capitalist-oriented operations, routines or procedures. It attempts to reveal the aesthetic and ideological contradictions that appear in urban space while simultaneously reclaiming the subjectivity of individuals by enabling new modes of creative expression. Schizocartography challenges anti-production, the homogenizing character of overriding forms that work towards silencing heterogeneous voices.
Posted by Particulations at 08:25 No comments:

A Psychogeographical Guide to Hunstanton Promenade 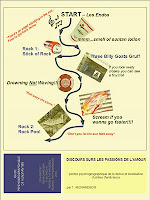 “Progress is nothing other than breaking through a field where chance holds sway by creating new conditions more favorable to our purposes.” Guy Debord

This map is a Situationist-style map based on Guy Debord's 'Guide Psychogeographique De Paris'.

The images highlight various ambiances on the promenade at Hunstanton, Norfolk. The curved line challenges the linear form of the promenade, and suggests an alternative way of walking along the prom (as does starting at the end). The phenomenon represented here do not appear in the order they do in actual space (also, some are transient, some invented e.g. there is no troll). The red of Debord's map has been replaced with blue to reflect the sea. The cream colour, which actually appears in many of the reproduced images of Debord's map, is meant to represent the sand. The text includes: subjective comments, rock music lyrics, popular phrases, a reference to a fairy tale, etc. In this Guide Psychogeographique I have used full colour on the map section, unlike my previous one of the University of Leeds campus, which can be viewed here:

I have noticed an evolution between my first Guide Psychogeographique and the second one and I am interested in seeing how these maps change over time and how far they become removed from the original map of Debord's.

Please note: I would like to give my thanks to those at www.geograph.org.uk who let me use their images. Also, to James Cridland at http://james.cridland.net Much appreciated!

Also, please see my blogs on A Schizocartography of Hunstanton

Bibliography:
Debord, Guy. 1996. 'Theory of the Dérive', Theory of the Dérive and Other Situationist Writings on the City, ed. by Libero Andreotti and Xavier Costa (Barcelona: Museu d'Art Contemporani de Barcelona). pp. 22-27.
Posted by Particulations at 11:00 1 comment: