#Post-Truth – Trump, Truth and Treachery in the Post Post-Modern 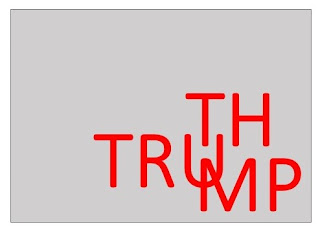 There was an interesting article in The Conversation yesterday: The surprising origins of post truth – and how it was spawned by the liberal left. It’s interesting to me because it could be described as coming under the general rubric of cultural studies, not least for the reference to Jean-Francois Lyotard’s book The Postmodern Condition: A Report on Knowledge, a key text in cultural theory. I won’t go into the article in depth - which starts by stating that post-truth is the international word of the year - as you can read it yourself. What I would like to do is include some extra cultural theory to support/expand on what the author, Andrew Calcutt, says and draw a few concepts together that are related to truth - reality, language and evil – and list them next to their respective theorists.

Michel Foucault: Truth, Discourse and Language
For Foucault statements, appearing as speech acts, are not about truth versus falsity, rather they designate a field of discourse that “emerges in its materiality, appears with a status, enters various networks and various fields of use, is subjected to transferences and modifications, is integrated into operations and strategies in which its identity is maintained or effaced” (2005, 118). Statements exist within a designated field, thus utilising relevant forces which dictate the validity of a given utterance. Foucault explains how the statement is partly concealed in its very deployment. ‘Truth’ is not a function of the words and sentences themselves, but the whole network of factors which form that specific utterance in the propagation of a specific statement. The statement exists through a form of appropriation and it is legitimised through the utilisation of the forces that exist, in an event-like state, around it. For Foucault “a true discourse engenders or ‘manufactures’ something that does not yet exist, that is, ‘fictions’ it” (1980, 193). In regard to the Trump presidency, we can see the power of statement and how it operates within a discourse of power, like all statements do. However, what is key to what I have written here in regards to Foucault is this manufacturing of something new, which also relates to my last post on the subject of Trump: #PresidentTrump – A Simulated Hold-Up. So, how does the concept of truth sit with another postmodern theorist, Baudrillard…

Jean Baudrillard: Evil, Language and the Sign
In The Intelligence of Evil or the Lucidity Pact, Baudrillard says “It is impossible to destroy the system by a contradiction-based logic or by reversing the balance of forces – in short, by a direct, dialectical revolution affecting the economic or political infrastructure. Everything that produces contradiction or a balance of forces or energy in general merely feeds back into the system and drives it on” (2005, 4) and I believe we witnessed this process unfolding in the US presidential election. But what of truth? The people were witness to lies in the Trump election (and BRexit). These lies did not seem to matter as much as some of us expected they might – especially in the academic community (although we will always have a respective theory to why these things happen, depending on our own specialism). Well, it’s all tied up in semiology for Baudrillard. Baudrillard asks the question: “What becomes of the arbitrary nature of the sign when the referent ceases to be the referent?” (2005, 68). He goes on to explain: “The sign, ceasing to be a sign, becomes once again a thing among things. That is to say, a thing of total necessity or absolute contingency…For the sign is a scene, the scene of representation, of seduction, of language: in language signs seduce once another beyond meaning [and] the disappearance of this scene clears the way for a principle of obscenity, a pornographic materialization of everything” (2005, 68-69). In regards to good and evil, Baudrillard explains that the disintegration of the sign reduces these terms to “happiness and misfortune” (2005, 139). In the media many have said that it was the misfortune felt by the, mostly, white working class in the US that led to Trump’s win. This leads me on to the next set of terms, not by a cultural theorist, interestingly, but in a book that the article reminded me of: The People of the Lie.

M. Scott Peck: Stress, Evil and the Cult Leader
In his book about human evil, the psychiatrist and author M. Scott Peck explains that this is what happens to individuals in times of stress: “The problem is that the role of the follower is the role of the child. The individual adult as individual is master of his own ship, director of his destiny. But when he assumes the role of follower he hands over to the leader his power: his authority over himself as decision-maker. He becomes psychologically dependent on the leader as a child is dependent on its parents. In this way there is profound tendency for the average individual to emotionally regress as soon as he becomes a group member” (from ‘Group Dynamics: Dependency and Narcissism’ in The People of the Lie) (1998, 223). The grandiose narcissist Trump is the cult leader par excellence. His self-appointed place as saviour of the vulnerable/misunderstood/side-lined makes him a ‘perfect’ leader in a #post-truth world!

Bibliography:
Baudrillard, Jean. The Intelligence of Evil or the Lucidity Pact. Oxford and New York: Berg, 2005.
Foucault, Michel. Power/Knowledge: Selected Interviews and Other Writings 1972-1977. Hemel Hempstead: Harvester Press, 1980.
Foucault, Michel. The Order of Things: An Archaeology of the Human Sciences. London and NewYork: Routledge, 2005.
Posted by Particulations at 14:16 No comments: