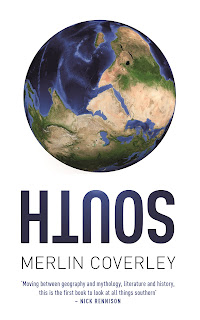 From the beaches of Tahiti to the streets of Buenos Aires, from Naples to New Orleans, Merlin Coverley’s wide-ranging study throws light on the ways in which the idea of the South, in all its forms, has come to exert such a powerful hold on our collective imagination (from the cover of South).

Coverley tackles this vast subject eloquently, breaking his book into six chapter (The Idea of South, Goethe’s Law, In the South Seas, Magic South, The Polar South and South of the River), in order to examine the concept of the South from a philosophical, geographical, cultural and literary perspective so as to demonstrate the complexity and fascination it holds for us. I shall be writing about ‘The Idea of the South’ (the introduction) and ‘South of the River’ here.

The Idea of the South

Being a cultural theorist the concept of ‘the south’ is particularly interesting to me (as are the other points of the compass, since they are often set in binaries and have values attached to them when set in opposition – for example the North/South divide in Britain). Coverley begins the introduction by showing us a 17th century map of the south pole and then describes the work by the artist Andy Goldsworthy entitled Touching North (1989) (see below). Touching North was situated at the North Pole, with the four individual parts of the sculpture facing each other and also outwards, with holes in the centre providing them with an opening which enabled them a space accessible from anywhere and everywhere. Coverley says that the sculpture “demonstrates how the directions of the compass may effectively be rendered meaningless: emerge through any of the four arches and one finds oneself heading south” (page 9). Thus Coverley launches the reader into the ambiguity of the term ‘south’ and in the introduction begins to explain how it developed. 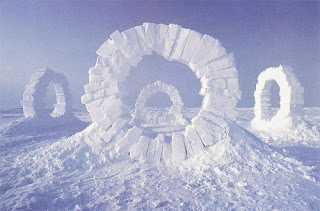 South of the River

Having spent most of my working life in London the idea of north and south of the Thames means something for me, especially since I worked and lived only in the north of London during my time there. Coverley begins the final chapter by discussing Angela Carter’s novel Wise Children (1991) and how the protagonists live on “the bastard side of Old Father Thames” (Angela Carter), in other words ‘the south’. Coverley explains that he has lived in south London on and off for about twenty years and notes that this division is now “less distinct, as the process of gentrification refashions the city into the one we inhabit today” (page 224). I must say, this was also my experience. Having moved to London in the mid-1980s (at the beginning of the property boom) and having left in 2002, there was certainly a smoothing out in regards to what was considered, when I first arrived, to be “broad concentrations of wealth and power in the North at odds with the poverty and lack of political representation to be found in the South” (page 224). The urban development and rising property value throughout the capital during the time I was living there, eventually made this distinction redundant. 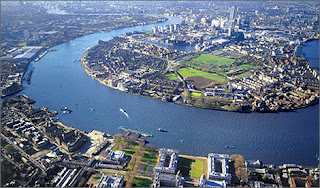 Coverley also mentions one of my favourite books about London Soft City (Jonathan Raban 1974) and quotes Raban talking about how when one lives in the north of London, visiting someone in the south can seem like a real trek when it involves crossing the river. So this is about the perception of the distance – broken by the river as a boundary - rather than the actual mileage.

Coverley’s latest book will have a wide appeal. I’ve only included a few of my own observations here (this is not a proper book review), but in the rest of the book he examines imaginary places such as Atlantis and books like Ballard’s Atrocity Exhibition (1970), and the concept of ‘the noble savage’ to the works of Iain Sinclair (let’s not forget Coverley is a psychogeographer).
Posted by Particulations at 10:04 2 comments:

Academic Journal Articles
‘How to (de)Construct a Place Setting in Three Easy Steps’, Academic Letters, September 2021
'The Global Scapes of Postmodernity: A Proposed Model for "Global Cultural Flow" in Fashion Education', Fashion Theory, Published online 12 Nov 2019 and 25, 6 (2021).
'Space, Gaze and Power: A Foucauldian Methodology for Fashion Advertising Analysis', Fashion Theory, 23, 1 (2019) and 25, 2 (2021).
‘Hiding the Bodies: Socio-Geographic Repression in Higher Educational Space’, Space and Culture (5 Jan 2018)
‘Assembling the Assemblage: Developing Schizocartography in Support of an Urban Semiology’, Humanities, 6, 3 (2017), 47.
‘A Schizocartography of the University of Leeds: Cognitively Mapping the Campus’, disClosure: A Journal of Social Theory, 23, 1 (2014), 140-162.
'A Schizocartography of a Redbrick', Spaces and Flows: An International Journal of Urban and Extraurban Studies, 1, 1 (2011), 119-128.
'Using Schizocartography as a Method of Critiquing the 'University of Excellence'', Reimagining the University, 1, 1 (2011), 12-21.
'Book Review: Urban Space as a Medium for Democracy', Parallax, 17, 3 (2011), 113-115. 'Introducing Schizocartography: Challenging Anti-Production - Schizocartography as Method and Practice', Society of Cartographers Bulletin, 44 (2010), 31-38.

PhD Thesis
'The Unseen University: A Schizocartography of the Redbrick University Campus' (2014 University of Leeds) 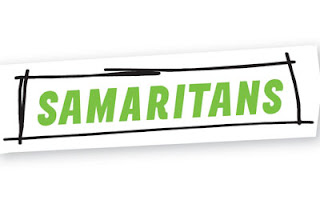 Yesterday a friend on Facebook posted a reminder about how difficult it can be for some people at Xmas time, and he put up the phone number for the Samaritans. From the UK you can call from any phone on: 116 123. 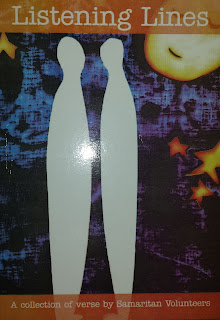 This post sparked an interesting discussion about the Samaritans, and I added that one of my family members was a Samaritan for 20 years and that there was a book of poetry called Listening Lines (Arrival Press 1995) that was written by volunteers and edited by Suzy Goodall. This is the poem of hers that was included, but there are many other touching ones in there, too. This poem was about a young homeless man living in King's Lynn, who visited Trixie at the Samaritans regularly, to talk to someone who cared, to sit in a warm room for a short while and drink a hot cup of tea:

Happy now,
No more strife.
He takes his life.

Trixie
Posted by Particulations at 09:30 No comments:

Email ThisBlogThis!Share to TwitterShare to FacebookShare to Pinterest
Labels: Listening Lines, The Samaritans 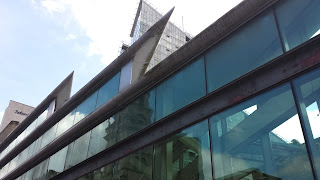 The City
White Noise is an art-based blog about people and the city. This is Andrea Gibbons website on the relationship between the country and the city: Writing Cities. Here is a post called A New Map of Berlin about cycling in Berlin.

Walking Related Posts and Blogs
Slow Travel Berlin has a post by Paul Sullivan on Walking in the City and Walking Through London’s History is a new project by students at Goldsmith’s (run by John Price).

Situationist Stuff
Derek Hales is giving a talk in Halifax on Dec 12 on Ralph Rumney and psychogeography. You can read a post entitled Salvaging Situationism: Race and Space by Andrea Gibbons here.

My Stuff
In November I was interviewed on Radio Fabrik in Salzburg for the Geographical Imaginations project by Kevin S. Fox - you can listen to the podcast here: Psychogeography 101. Here is an up-to-dated list of the guest posts on Particulations.
Posted by Particulations at 10:39 No comments: