For the Benefit of Mr Kite 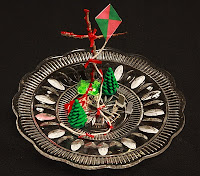 I went to a workshop at the Stanley and Audrey Burton Gallery on Saturday February 19th. We made landscapes on a dinner plate, following a walk around the cemetery of St Georges Field at the University of Leeds. The above is my contribution and I would like to dedicate it to Pablo Fanque, and Christine Bairstow and her twin sister.

Christine Bairstow wrote to the Yorkshire Evening Post in 2008 to protest about the fact she cannot locate her twin sister who died in 1946. The gravestones were separated from the bodies in the ground during the landscaping of the space in the 1960s. Pablo Fanque, the first black circus owner in Britain, is buried in the cemetery along with his wife. The Beatles sang about Pablo Fanque on their Sergeant Peppers album in the song Being for the Benefit of Mr Kite (he is apparently also mentioned in a Cockney Rebel song - interesting). 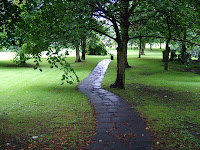 The above image shows the cemetery as it appears in 'real' space, as opposed to artistic/ideological/political space, which my plate represents. Below is a timeline of the cemetery that I put together from a number of sources, which are included in the bibliography below.

Dunk, Julie and Julie Rugg. 1994. The Management of Old Cemetery Land: Now and the Future (London: Shaw and Sons).

The Site of Deconstruction 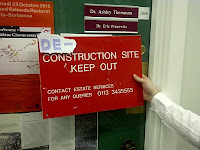 Here is an image I took on a mischievous psychogeographical trip around my school last night: The School of Fine Art, History of Art and Cultural Studies at the University of Leeds.
Posted by Particulations at 08:35 No comments:

Walking the Board: University of Leeds Monopoly

This is Hyde and Ford playing University of Leeds monopoly over the Christmas period. Apparently the original game goes back to around 1903. It has lots of the campus buildings - Roger Stevens Lecture Theatre, The Great Hall - with many of the traditional monopoly features. I had hoped the counters would relate to the university, e.g. a book, a mortar board, a pint glass, but they are the traditional ones. The profits go to the alumni fund.

Relates websites:
Monopoly on Wikipedia
University of Leeds Monopoly
Posted by Particulations at 10:36 No comments: