Here are the details of my lecture for my Brexit-related undergraduate module:

We are looking for a speaker for week 12 and wondered if you’d be happy to come along and talk to our students, please. Perhaps the Vice-Chancellor could call you to arrange that.

Thank you in anticipation.

The Precession of the Demolition: A Baudrillardian Thought Experiment 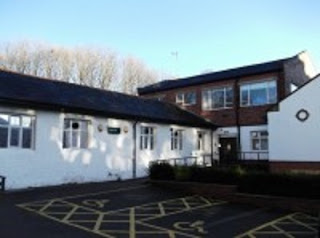 I was talking to Tina Richardson this week, my new colleague, about the office that we share and the building we are housed in at the University of Leeds. It’s now known as '28 University Road' and is temporarily being used by our school, The School of Design. There is a notice on it that says 'Formerly Geography East'. Tina says she knows it as a geography building as she taught there a few years ago and some of her geography friends had their offices there, too. Apparently the building is due for demolition, and even though it looks like a dodgy little white stucco temporary building, it has an interesting history, being at one time a maltings. 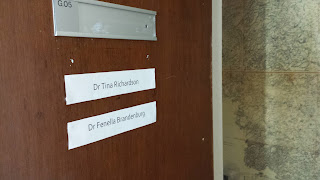 As you can see from the above image, there is a big old map in the background, just outside our office. There is also another old map in the corridor. The building is very warm, although I have not worked out where all the heat is coming from (maybe an underwater spring reminiscent of Journey to the Centre of the Earth), and the corridor has a strong whiff of some kind of sweet-smelling mould, which I actually really like. It is quite scruffy and you could say it is 'falling apart', but it definitely has a charm and we both really like it there. In fact we don’t want to move, which brings me to the purpose of this guest post, which, in a way, I am writing on behalf of both of us: if we staged a pretend sit-in on the day the demolition begins - the day when university officials appear in hi viz jackets with their clipboards, and men with hydraulic excavators and loaders enter the building – what would happen?

Bear in mind this is not a real sit-in. It is just a pretend (fake), one!

Well, as has been written before by Tina Richardson in a post about staging a pretend faint in a public place (A Hysterical Simulacra), all the apparatus that would be employed in a real situation would also be employed in a false one, since, from the outside, both look the same. This is Jean Baudrillard’s concept of the simulacra. You will not be able to stage a fake sit-in, because, as Baudrillard says: “the network of artificial signs will become inextricably mixed up with real elements”. He goes on to explain that it is required that “everything is reduced to the real…to the established order itself” and the system operates in order to “devour any attempt at simulation”. In other words, the structure, as it appears in organisational form (what Louis Althusser describes as the ideological state apparatus), is unable to see beyond its own ideological appearance and incapable of seeing anything above its own order of simulation.

However, Baudrillard also goes on to say, and I think this is actually key in these types of thought experiments, it actually occurs even before “institutions and justice come into play”. Which is interesting as initially this sounds a bit like a contradiction. Nevertheless, what he says following this is: the simulation can never be punished as such, because it can only either be punished as a less serious offence (because of a lack of consequences), or as a crime against the judiciary when various state officials become involved (e.g. the police). He goes onto say that either way it is never punished for what it is, a simulation, “since it is precisely as such than no equivalence with the real is possible, and hence no repression either. The challenge of simulation is never admitted by power”. 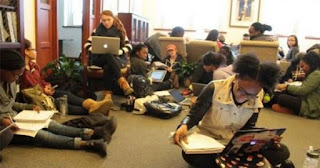 So, what about staging a sit-in?

Picture this: myself, plus Dr Richardson, and the odd member of staff, a group of recruited students (maybe from The School of Performance and Cultural Industries) 'stage' our sit-in in the student common room, right near the entrance to 28 University Road. We all know that this is a performance. We are not there to make a protest or get in the way of the bulldozers. This is a simulation. The contractors open the door to see a whole load of protesters sitting in the common room, with their placards saying 'Save 28 University Road', 'Keep this wonderful heritage site!' and 'Don't demolish the famous maltings'. They go back to the site office to get the boss. He takes one look at the resistant academics and students and heads to the university administration building, returning with the man-from-estates who promptly calls the police for fear of any potential litigation somewhere down the line...

At what point did this simulation become real?
Posted by Particulations at 14:16 No comments:

A Psychogeography of Where I Grew Up 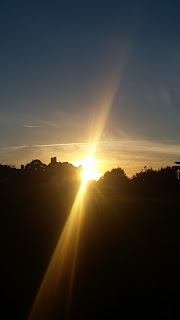 This is an account in (inter/cultural) translation and transposition. I’ve been inspired to write this because I realised that, just like the personal is political, the personal is geographical too! So there’s a nice kind of methodology in there, which is why psychogeography is so relevant!

Self- disclosure: Loehne – this is the place where I grew up, a place in the contradictory location of being both in the east and in the west. Not near the border with East Germany (or vice versa), but East-West-phalia. This is what it’s actually called: ‘Ostwestfalen’. It’s abbreviated as ‘OWL’ – and so it acquires a translated position as the land of the Owl!

Loehne, within it, is a town, not big, a town only just. Its main feature is once again an east-west connection, and this time of the bigger kind: it is situated on the east-west train-line that ran from Paris, or London via ferry, all the way to Moscow. Or vice versa I should say, because the train carriages that were used were original Soviet trains! Uniquely and exceptionally despite the Cold War and the Iron Curtain and the Berlin Wall, this train ran – everyday! Who could have been on it though? I was, sadly, too young to know. Besides this kind of wondrous line, little and absolutely unassuming Loehne lies on one of the main north-south links as well, so it’s been a big junction, with a massive train-depot that went with it. In hindsight, it looks like I grew up on a kind of magic crossing, like the meeting of ley-lines or so.

Small town big trains! There are lots of other towns in the area, but all of them small. So it’s an urban-rural mix, and this is reflected in terms of labour history as well: it’s got traditionally, in quite equal parts, workers and farmers.

Here the terms show their inadequacy too: as if farmers don’t do work! But if we think of workers as factory workers, i.e. those in a contracted situation rather than working for themselves, then Loehne is one of those places where workers and farmers meet. It’s not a farming community and not an entirely industrial community, it is both! There have only been some mines in the area too, though many more mines are to be found a bit further down from here. Basically the next big town to Loehne is Herford, the next city next to that is Bielefeld, and behind Bielefeld you have a rural area in the north, and the ‘mine field’ in the south: Dortmund, Bochum, Essen, and all the very big mining towns are to be found here: all the mine-biggies! I remember very well, whilst being at school, hearing when mine after mine was shut down just next door to me, and I was really surprised about why this was happening. There was no miner’s strike here big enough to make headlines, but there was obviously frustration and activism here too: the zeitgeist was the same, and the danger of an edge of an age reached. This topic is so big, and has such strong echo with northern England, that I’ve set aside a project for this – to come! 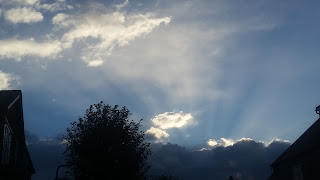 Mother, Father, Child – in the landscape

The geography of the area is: it’s a big and wobbly hilly valley tucked inside two strings of bigger hills, which are the last before the land becomes flatland, from where it eventually meets the sea. The hill-string in the south has a romanicised (-romanticised!) name (Teutoburg hills), the one in the north has a germanic name (Wiehen hills). The roman hill-string would be my dad: he, the one from far, mixed, cosmopolitan, once sephardic , and my mum the germanic hill-string: the parochial, local one – though in reality she was not quite local to the area. I was situated between my parental hills, so I was in the valley. My older brother would have been on top of the valley, I at the bottom. I was closest to the river then, I liked fluidity, I wanted to flow - but on the other hand the river could flood me over, so my position was unsafe too!

There was once a battle at the roman hills, between the Romans and the Germans, a battle which may have been reverberated symbolically in the sort of anti-marriage of my parents, who never got on. In transposed Freudian terms one might say that my mother and father were battling between being ‘ego’ and ‘superego’ whilst I was the little ‘id’.

I, the id from the valley, trying to rise and grow, either by acquiring ‘ego’ or superego’ aspects for myself, or by become an id-entity, by acquiring an identity! My personal landscape (‘psycho-geography?’) then, needs its own hills too. 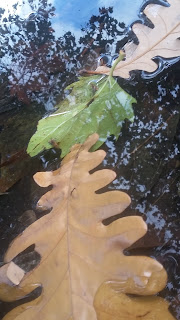 I’ve avoided calling it a hometown, because it hasn’t been for a long time, though it is assumed to be this on many occasions. The term ‘hometown’ sounds too static for me, as if the concept of ‘home’ cannot move! I have not lived there as an adult, and so the attachment to place has not undergone the ‘independent movement’ that adulthood offers. Independent movement is key to grow into a town, and even if you have grown up somewhere, you might not necessarily grow into it (whilst growing up!), in this sense. I wonder what has impacted me most about Loehne: maybe the combination of railways and mines: my way to school led via a path which was a long-disused train-line that once carried workers to and from a mine up the road (or up the train, into the hills), where iron-ore was once mined.

I have become a miner perhaps in the psychological sense: I am mining my subconscious, there is so much ‘raw’ material inside, which can be used for the production of thought!

Related posts...
The Muso-Psychogegraphical Wanderings of a Retrospective Sojourn
Posted by Particulations at 16:44 No comments: