Conclusion of Walking Inside Out 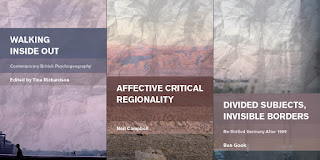 When I author-edited Walking Inside Out: Contemporary British Psychogeography (Rowman and Littlefield International 2015) back in 2014, I wrote two conclusions. The first one was, in the most part, a reply to the critics of psychogeography. Below is an extract from the second draft, the one that was published (please click here to download the whole chapter), which I am making available for the first time. I will post the original draft in the next blog post.

In an interview in Fortean Times in 2002, Sinclair was asked what his involvement was in the revival of psychogeography during the 1990s, he replied: “In a classic sense I don’t think I had anything to do with it. But the whole term has been dusted down and reinvented and re-used by people like Stewart Home and the London Psychogeographical Association” (cited in Pilkington and Baker 2002, 3). Of this period in psychogeography, Sinclair explains that “there was a kind of strategy to this rebranding, I was quite happy to run with it as a franchise, as a way of talking about doing the things I'd always done and providing a useful description that could be discussed in public. It became a bit of a monster on the back of that” (ibid.). He goes on to explain that by the time he was using the term it was “more like a psychotic geographer…a raging bull journey against the energies of the city” (ibid.).

At the point of writing this conclusion, well over ten years on from Sinclair’s comment above, what has psychogeography become in the second decade into the 21st century? And, is the current resurgence just a continuation of the one Sinclair mentions (the one of the London Psychogeographical Association), or has it morphed into something else?[i] James D. Sidaway says of human geography and its related fields that “increasing attention is being dedicated to the social relations of emotion and action under the label of ‘affect’” (2009, 1092). If there is a current focus on the affective response to space then this could be connected to what is called placiality (Edward Casey). Postmodern space has become so complex in its palimpsest form that our reaction to it has reached a kind of critical mass whereby we feel compelled to attempt to articulate our response to the terrain. This is also reflected in cultural theory on space/place of the late 20th century (such as that of Henri Lefebvre and Gaston Bachelard), as discussed by Stephen Hardy in ‘Placiality: The Renewal of the Significance of Place in Modern Cultural Theory’ (2000). In 1984 Michel Foucault stated that “[t]he present epoch will perhaps be above all the epoch of space” (2001, 237), but of today’s epoch we can confidently say that it is one of ‘place’. The concept of place is now finding its way into popular/everyday vocabulary. In December 2014 a BBC Radio 4 programme entitled Sense of Place was broadcast. It included an interview with Joanne Parker who, on the concept of place, said: “one person’s place is very much another person’s space…landscape is first and foremost a way of creating belongingness and tying us together” (2014).

Writing at the same time as Sidaway, Bonnett says that “British psychogeography should be understood as a site of struggle over the politics of loss within radical imagination” (2009, 46). Our desire to not only explore the social history of a particular space, but also to express it in a personal and affective way that responds to the aesthetics of that place as it is for us, is one that comes about through description via our imagination, an individual expression which is different for everyone, in other words a psychogeographically articulated response. Bonnett says a “much broader group of people are now interested and involved in psychogeography, many of whom have no interest in the Situationists. It may be argued that this is a form of depolitization or that psychogeography has outgrown the limited and exclusionary world of the revolutionary avant-garde” (2013). If this is the case, then the sharing of psychogeographical accounts from whatever perspective (activist or otherwise) have been enabled through contemporary technology, with websites, blogs, social networking and aided by new ‘geo apps’.

Global Positioning Systems (GPS) and Geographic Information Systems (GIS) have granted individuals access to data and aided them in creating representations of space/place in a totally different way, as the hobby of geocaching attests to (geocaching involves individuals locating secreted packages, with clues to their location loaded online, via GPS). Even navigating the internet itself has been compared to exploring urban space (see ‘Psychogeography, Détournement, Cyberspace’ by Amy J. Elias [2010]).[ii] Often appearing under the umbrella of neogeography, the use of the internet and mobile technologies opens up space for groups and individuals and enables them to readily share the products of their walks. For example, OpenStreetMap is open source software by the OpenStreetMap Foundation and is a collaboration by its contributors providing free geographical data and mapping. Anyone can contribute by signing-up online. The data of routes walked can be picked up by using GPS software on a smartphone, then made into maps and freely shared.[iii]

This digital and satellite way of creating maps enables a synthesis with the older peripatetic method of simply talking and writing about walks. It allows the psychogeographer to include more tools for tracking their walks, presenting their information and making it available for others to access. These maps and forms of data collection show the infinite possibility of cartographies and ways for walkers to present personal and qualitative information. They offer a large degree of control of the mapping process to the user/cartographer. The open source software that is often used for these types of collaborations to a large extent disengages the data from capitalist production and, hence, provides more freedom of expression, production and distribution. This enables their use in explorations of space, creating mapping-oriented art for pleasure or for a variety of community-based projects.

The current resurgence in walking has coincided with a renewed interest in cartography encouraged by the availability of digital tools. While these tools are often used by non-specialist users in community and arts-based projects, the contemporary psychogeographer is at once embracing and critical of the new technology, preferring to use it as one tool amongst many for creating, recording and producing output from the dérive.

In The View From the Train: Cities and Other Landscapes (2013) Keiller says that the current revival in the UK is very much Situationist oriented and is connected to the desire to explore the urban landscape with tools such as the dérive (2013, 133). While this seems to counter what Bonnet says above, this is may be more to do with a matter of perspective. Both seem to be occurring, separately and simultaneously. The objectives for walking are over-determined. Some groups and individuals are interested in the process and practice of the dérive-type walk and are not politically-oriented. Others are attempting an activist pursuit, on differing scales. And some, even though they are not overtly being interventionist, nevertheless will be intervening in the space as a side-effect of what their other intentions might be.

[i] In an online article in June 2014 on The Quietus ‘‘A Living Memory’: Iain Sinclair on Life at 70’ describes the term ‘psychogeography’ as having “threatened to become an albatross around his neck” (Burrows 2014).

[ii] The flexibility of psychogeography enables it to be extended into many field, such as tourism, as can be seen in Charles McIntyres book Tourism and Retail: The Psychogeography of Liminal Consumption (2012).

[iii] For those who are interested in technology and its uses in psychogeography, the geographer and psychogeographer Tim Waters provides examples of his own work in this field on his blog www.thinkwhere.wordpress.com.

Posted by Particulations at 10:07 No comments: