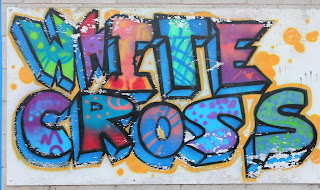 Winter – cold, icy rain, damp air and mushy cardboard on the ground. I am walking home to my council flat after work at night along a path besides the dual carriageway. To my right cars whizz past as the traffic lights change - a 40 mph speed limit rarely kept at this time. Memories surfacing to mind, police stand (shielding a crumpled car), a squeal of brakes, a child's body flying in the air, a human chain protest and a pelican crossing is built.

To the left side of the path in the woodland of the local park, a banging noise starts, slowly at first then becoming increasingly louder. I look around. No-one else is near. I am on my own. What is it? A poltergeist? A noisy spirit? A mechanical pump? Looking past the belt of litter and moonlit silver birch trunks into the dark beyond, I cannot find an exact location or think of a rational explanation for the source of the sound, although I feel sure that there is one. Part of me wants to investigate but I decide to carry on home.

Whitecross Road Council Estate was built around the same time as the dual carriageway, in the early 70's when Warrington started to become a New Town. It has a bad reputation: a poverty premium landscape at the bottom of the never-ending austerity policy. A confusing maze of flats and houses, with narrow alleys, blind corners and jumbled numbers where postmen get lost. Designer tracksuit-wearing teenage gangs smoke skunk in the subway: ‘too cool for school’, living for the moment. An aura of hopelessness and defeat compacted in a screwed up lottery card a few metres away from an overpriced corner shop. Too bleak and clichéd for some, a difficult, mundane and ordinary area. 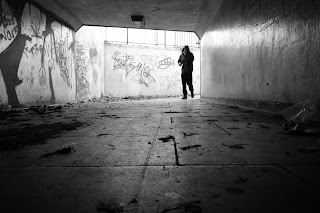 Morning hailstone frozen onto car windscreens, the texture of Whitefriar’s glass, the yellow triangle of a wheel clamp in a back alley. Closing the front door a flutter of panic and a pocket check for my keys. A frail looking old-aged pensioner with gold teeth and wearing a thick camel covered overcoat is struggling to put out his wheelie bin. Using the brick wall for support, he slowly makes his way back to the warmth of his flat. I wander on to the shops on Lovely Lane.

This is a multi-cultural area and is reflected by the types of shop on the lane. Full English breakfasts, pies and sandwiches, pizza, kebabs and halal takeaways, Philippine and Indian food, a Continental Bazaar. A canine and feline beauticians, a launderette (the front of which looking to me somehow hipster authentic reminds me of the trendy cocktail bar in Manchester that disguised itself as a launderette). Further down there is a church and an Islamic Centre. A teenager in a red hoodie is talking on his mobile phone. A Hells Angel mounts his bike and rides off. ‘JUST EAT’, a lurid sign seems to threaten, but I have lived in the area long enough to feel at ease in the place. An industrial clothing shop with a window display of hi-viz jackets.

Lovely Lane was once a country lane with rose-covered thatched cottages in this part. An old map from 1851 shows just 11 buildings situated in the lane, the lane dating back to at least to 1775, with Sankey Hall and an ancient water mill. Change feels slow, with people just going about their daily lives. The area still feels the same as when I was a child, time steadily ticking by, but it is happening constantly and I remember climbing the fresh sticky banks of earth as a child when the road was being built. The old Pavilion cinema (now used as a carpet shop) seems to be the most obvious sign of history. A survey of 1465 describes the Whitecross district as a suburb. Will the area become inner-city in the future? My mind projects the White cross into the middle of the giant roundabout with a funeral procession stopping there to rest at a time when burial grounds were not so numerous, the grass on the roundabout being the only reminder of Sankey Green. 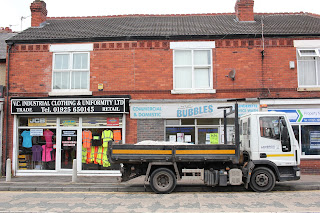 The local pub once called The Mad Hatter has now been shortened to The Hatter, losing its Lewis Carroll connection. It used to be full on a Friday night, with workers from the nearby cake factory called Memory Lane. The cake factory itself now only existing in peoples’ memory and replaced by houses. ‘Will the city of culture bid make any difference to the people here and what art and music do they like?’, I think as I walk on. “Man critical after attack”, reads the headline of the weeks local paper. A gang of six of teenagers arrested for allegedly attacking him in the park and leaving him fighting for his life. Back home I wake up after falling asleep whilst reading a book. It is dark inside and outside the room, but by the sound of the traffic flow I can tell that it is rush hour around 6pm.

Later at night sad news comes over the radio that Mark E Smith the lead singer of The Fall has died. One of my favourite groups, I remember when they played the old Carlton Club in Warrington in 1979. I was only sixteen at the time and frustratingly not able to get in. Also I remember missing Joy Division at Eric's in Liverpool, as my friends did want to go that particular week, Karma coming to them the following year when U2 cancelled a gig at Salford University. On the radio the tributes start to come in and a quote by the late DJ John Peel stays with me: The Fall "always different, always the same ". 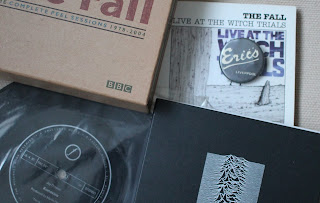 Posted by Particulations at 10:49 No comments: