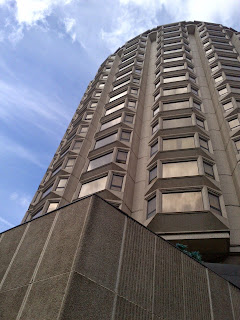 While at the Royal Geographical Society this week, I went for a stroll over to Knightsbridge and discovered another one of Richard Siefert’s buildings: The Park Tower (1973). Originally the Sheraton Park Tower (and previously the Skyline Park Tower Hotel) it is compared to Elmbank Gardens in Glasgow (according to Wikipedia), but how they could not compare it to One Kemble Street in Holborn is a serious oversight. 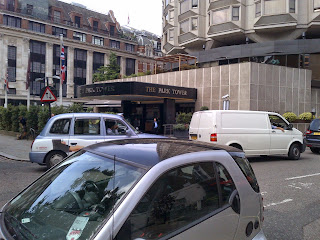 Park Tower was renovated in 2013 and the Hyde Park Penthouse Suite sells at £7,200/night in this brutalist hotel. You pay extra for your own butler. The cheapest room I could find was £319.
Centre Point is often considered to be Seifert’s most famous building, but it’s Tower 42 that’s actually my favourite London building. A few of his buildings have been demolished in recent times, Wembley Conference Centre, for instance.

On www.postwarbuildings.com it describes The Park Tower thus:


The building consists of a 15-storey rotunda housing 300 bedrooms, on a two-storey podium containing bars, a lobby and reception areas. The tower is formed of a reinforced-concrete service core, around which rooms are massed on a frame supported by pilotis at podium level. The most distinctive feature of the Park Tower is the façade treatment of the rotunda. Likened by Charles Jencks to corn-on-the-cob, each of the twenty rooms per floor, is articulated by a projecting bay window and clad in ochre mosaic. This gives the building an extremely tactile surface, while the rhythm of the windows goes some way to alleviating the bulk and emphasizing the vertical. This cellular façade treatment was a particularly Seifert architectural device and many of his buildings share this motif. 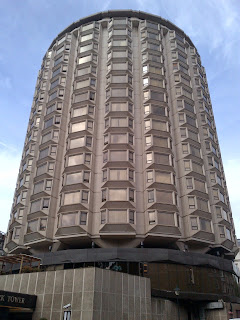 Relates blogs:
Negotiating Brutalist Space at the University of Leeds
Brutalist Access Points and Disappeared Stationers
Posted by Particulations at 15:00 No comments: 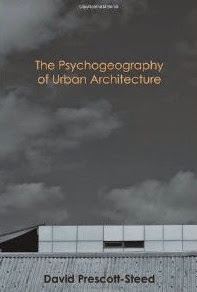 Related Links:
Walking Inside Out: Contemporary British Psychogeography
How We Used to Live – A Psychogeography of Your London
Posted by Particulations at 16:15 No comments: