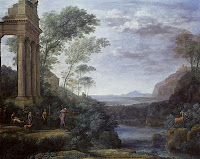 I've been reading Ken Knabb's edited volume Situationist International Anthology and came across a paragraph that reminded me of something Iain Sinclair discussed in a series in The Guardian in 2009, called 'Hidden Britain'. Sinclair explains how it is only at the point of near extinction that some buildings become visible to us for the first time: “When you don't see it, it is still there. And when you do, it is on the point of disappearance.” I think this is philosophically interesting from the perspective of a kind of reverse subjective causality. This is what the Ivan Chtcheglov says in 'Formulary for a New Urbanism (1953)':

We know that an object that is not consciously noticed at the time of a first visit can, by its absence during subsequent visits, provoke an indefinable impression: as a result of this sighting backwards in time, the absence of the object becomes a presence one can feel.

Please note: I have included one of Claude Lorrain's paintings, above, because the preceding paragraph mentions him in the context of creating 'situations', and also because of the SI's interest in 'ruins'. 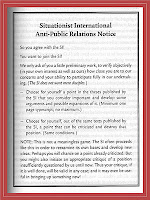 I just found this excellent SI notice in Ken Kabb's edited volume Situationist International Anthology. I have also included, below, an interesting quote from Raoul Vaneigem from 'Basic Banalities (Part 2)', where he is discussing the spectacle in, what turns out to be, very Baudriallardian terms:

Time itself is deprived of a centre. In this concentration-camp world, victims and torturers wear the same mask and only torture is real . . . The tortuers condemn all hierarchical power, however organised or dissimulated they may be.

Links:
The Burlesque of Psychoanalysis
The Situation at the University
Guide Psychogeographique de University of Leeds
Posted by Particulations at 11:47 No comments:

During the wintery months, any visitor not wishing to brave the blustery beaches of Hunstanton with it's freezing winds, might like to take a walk around some of the town's notable historical buildings. This blog highlights some of those known in the town, three of which display Civic Society coloured plaques. For those of you not familiar with the area, please note the honey-coloured bricks that many of the buildings are made of. It is a sandstone known locally as Carrstone. 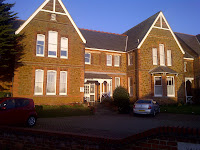 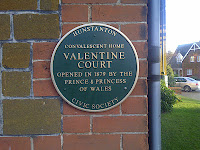 According to Jim Whelam, writing in the Hunstanton Newsletter:


The establishment of a convalescent home at Hunstanton was first suggested in 1869 in Ely Cathedral, so that sick and poor people from Ely could recover their health with the assistance of sea air . . . The Prince and Princess of Wales agreed to officially open the home on Easter Monday, 14th April 1879. As soon as the date was known, all the villages between Sandringham and Hunstanton began making preparations on a grand scale to honour the visit. During the Easter weekend the weather was foul with keen east winds, rain and snow. The day of the visit commenced with a dull leaden sky, no apparent sign of an improvement, and not even the numerous decorations could make Hunstanton look anything less than miserable. However by noon the clouds lifted and the sun shone, crowds gathered, the railway brought in 3,000 visitors and thousands of others entered by road.


Now a block of flats, the building appears on google searches mostly under property sales. Jim Whelam's account in the local newsletter is really interesting and can be read here:
The Royal Opening of Hunstanton Convalescent Home 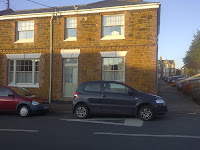 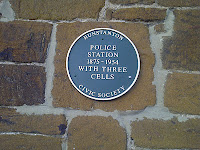 This old police station is great. It just looks like a 'regular' terraced house. However from 1875 to 1954 it was Hunstanton's police station. I wonder if the three cells were in the basement. One can only assume that crime was a relatively minor issue in Britain until the mid 50s, as the current police station, on the main road, is pretty big in comparison. 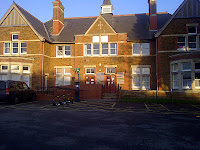 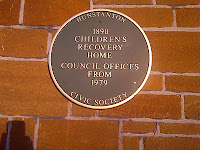 Health, for the Victorians was a major concern, some would say even an obsession, and the seaside was a perfect place for convalescing. This, once, children's recovery home is now the council offices for the town. Now that our children are not dying of diphtheria, tuberculosis and typhus these old Victorian buildings are put to other uses. I don't have the mortality figures handy for Hunstanton, but in Leeds in 1867 most people who died were 4 years old and under, and in one book I have - To prove I'm Not Forgot - Living and Dying in a Victorian City by Sylvia M. Barnard - the under one's were classed separately, because their chances of living beyond one year old was so slim. 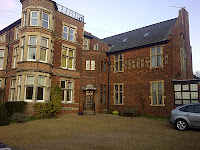 This is the old vicarage and is located in Northgate, at the town end of the street. Again, it is now apartments and it is difficult to find information on it online other than that on estate agents sites. However, I have included another photo of the building (below). This type of architectural detail is very popular in Hunstanton, and manifests in various forms on a number of buildings. 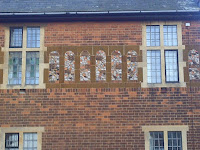 Often this kind of inlay appears in a square shape, which produces a tiling effect. I really like it and I wonder if it is a common style from that period that was produced mostly in this area, or whether it is more generic.

My little psychogeographico-historical trip around Hunstanton was interesting. The more time I spend in the town looking at the architecture and soaking up the ambience, the more I get in touch with its aesthetic, which feels like it is very particular to the area.

For information on my other work on Hunstanton please go to: Reading the Arcades/Reading the Promenades and look for the links for Hunstanton 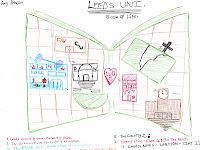 This week, as a change from teaching cultural theory to first year BA students, I decided to run a cartography workshop to support last week's lecture on space and the city. I set the task of making an emotional map of the campus. These are the three that were awarded first (Amy Dawson - above) and joint second prizes (Bob Palmer and Katerina Lee - below).

In people all over the world...we find ourselves.

I picked up this lovely little second-hand pamphlet online called The Revolutionary Pleasure of Thinking for Yourself while looking for Situationist journals. It was printed in 2003 in the US and the introduction states that the essay therein was originally published in The Spectacle in 1975.

There is one paragraph that gives an excellent example for helping explain Marxist abstraction, alienation or even the Debordian spectacle. Here it is:

Suppose that you want a cup of coffee from the vending machine at work. First, there is the cup of coffee itself: that involves the workers on the coffee plantation, the ones on the sugar plantation and in the refineries, the ones in the paper mill, and so on. Then you have the workers who made the different parts of the vending machine and the ones who assembled it. Then the ones who extracted the iron ore and bauxite, smelted the steel, and work for the electricity utility which supplies power to the machine. Then all the workers who transported the coffee, cups and machine. Then the clerks, typists, and communication workers who coordinated the production of all things necessary for the others ones to survive. That gives you a direct material relationship to several million people, in fact, to the immense majority of the world's population. They produce your life, and you help produce theirs. In this light, all artificial group identities and special group interests fade into insignificance. Imagine the potential enrichment of your life that at present is locked up in the frustrated creativity of these millions of workers, held back by obsolete and exhausting methods of production, strangled by lack of control over their own productivity, warped by the insane rationale of capital-accumulation which pits one against all and makes life a mad scramble for economic survival. Here we begin to discover a real social identity - in people all over the world who are fighting to win control over their own lives, we find ourselves.

Links:
AK Press and Distribution
Posted by Particulations at 16:26 No comments:

Email ThisBlogThis!Share to TwitterShare to FacebookShare to Pinterest
Labels: capital accumulation, Guy Debord, Marx, Marxist political economics, The Revolutionary Pleasure of Thinking for Yourself, the spectacle

There's Summat Going on at Leeds 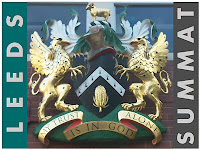 I made the above film while helping out at Gerry Turvey's Walk+Talk workshop at the Leeds Summat Gathering on Saturday November 26th 2011. It is shot on the University of Leeds campus. The old building that is featured is now a private Halls of Residence but used to be a priory. The university owned it for a period of time.

Links:
Gerry Turvey
The Priory of St Wilfred
Posted by Particulations at 16:33 No comments: