In The University in Ruins Readings states that we need to accept that the posthistoric university is a “ruined institution”, but: “Those ruins must not be the object of a romantic nostalgia for a lost wholeness, but the site of an attempt to transvalue the fact that the University no longer inhabits a continuous history of progressive revelation of a unifying idea.” (1999: 129). He goes on to explain that part of the understanding of this involves becoming aware of the complex spaces of the university in which we attempt to reside, but are actually unable to because we are alienated from them (ibid.). In the chapter 'Dwelling in the Ruins' Readings provides a concrete example of these ruins: “The campus of the State University of New York (SUNY) at Buffalo is decorated by some artificial concrete ruins that allude to Greco-Roman temple architecture [...]” (1999: 169). Readings sees the simulated ruins at Buffalo, situated next to modern buildings, as being problematic because they ground the arts and sciences in a specific tradition that amongst other things, excludes the local other: “ruins are the objects of subjective appropriation and mastery, whether epistemological or aesthetic.” (1999: 170). 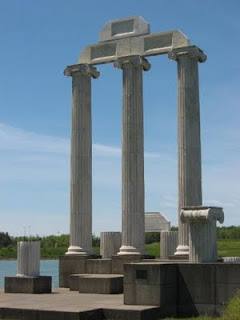 Figure 1: The Baird Point Columns
Image Courtesy of www.waymarking.com
According to the website that the above image was downloaded from, the columns have been situated on the edge of a man-made lake and are “a popular hangout for students”.

By looking at the image above (figure 1), it is not apparent what the past life of the columns is (be they from Classical Greece, Italy or elsewhere). They could have been created for the purpose of a sculpture. However the University of Buffalo website dedicates a page to them. They are known as The Baird Point Columns, and they do have a history. This is what the website says, under a section called 'Buildings:
The marble columns on the concrete platforms were once part of the old Federal Reserve Bank in downtown Buffalo, and for some years lay outside old Baird Hall on UB’s south campus before their relocation to the lake. The columns were dedicated as a memorial to servicemen and servicewomen. (University of Buffalo 2009)

How the School of Management describes the ruins is particularly interesting, fitting in with the posthistoric critique of Readings, just discussed: “The Baird Point Columns represent education as a foundation of life.” If the columns are seen in this context, then they could be considered nostalgic, a hankering back to the cultural aspect attached to the nation-state, even if that cultural concept is not one of the origins of that nation, and rather is an adopted one (Greco-Roman). 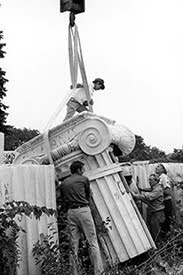 The University of Buffalo archives dedicates a whole section to the Baird Point Columns and their resurrection (figure 2). It explains how the columns were saved during the Federal Reserve Bank's destruction in 1959; they were cleaned but not reused until 1978 where they were placed at their current position.

I do not think Readings is entirely accurate in describing the Baird Point Columns as “artificial concrete ruins”, as I believe this implies they have been created for the purpose of a representation that is one of obfuscation: the ruins are still the ruins of the bank even if they are not original Greek or Roman ruins. The university is not 'pretending' the ruins are from classical antiquity. The history of the columns is available for everyone to search out, even if that history is not at first apparent. What I think is particularly interesting, is that they came from a bank: the symbol of the university has been adopted from a financial institution. In 'Situationist Space' Thomas F. McDonough explains that “spectacle-culture” takes something away from public space that was once available to the individual; a city that once provided meaning and significance, now in ruins simply has the function of reproducing power: “its history is put back into play in harmless form as entertainment in, for example, tourist attractions where 'public' space is commodified [...]” (1994: 76).

The SI were not duped by the appeal of the ruins: “We have no predilection for the charms of the ruins.” (Situationist International 1996: 45). They proposed to use the ruins in a particular way, by representing the aesthetic in a new context, through détournement. What the SI proposed was to create something new for the people “out of the ruins of the spectacle” (Sadler 2001: 17). Debord says that the spectacle is “capital to such a degree of accumulation that it becomes an image.” (2005: 34). For Readings, the spectacular form of the university is built on excellence, and the performative bureaucratic structure that reproduces excellence: “The university of excellence is the simulacrum of the idea of a university.” (1999: 54). While for Debord “The spectacle corresponds to the historical moment at which the commodity completes its colonization of social life.” (2005: 42), for Readings this is at the point that the university's Enlightenment project for humanity and culture became taken over by one of excellence. But, as Readings explains with the help of Freud's model of the Unconscious: new buildings that are built out of the ruins of old ones, present only one image, where two are co-present in the unconscious (1999: 170). This creates a type of haunting, appearing as a threat, which cannot be questioned through traditional means:
To inhabit the ruins of the University must be to practice an institutional pragmatism that recognizes this threat, rather than to seek to redeem epistemological uncertainty by recourse to plenitude of aesthetic sensation (nostalgia) of epistemological mastery (knowledge as progress). (1999: 170-171).

Neither a Romantic aesthetic, nor a harking back to the humanist quest for knowledge as liberation, will enable a valuable critique of the posthistoric university.

McDonough explains that the dérive as a practice helps to reappropriate “public space from the realm of the myth, restoring it to its fullness, its richness, and its history.” (1994: 77). Walking in urban space, examining its décor and investigating its signs, enable that history to be revealed. McDonough goes on to say that: “The Situationists' antipathy toward the 'charms of the ruins' was precisely an acknowledgement that these “norms of abstract space” that construct the public domain as evacuated were not “charming at all'”. (ibid.). While the Baird Point Columns may appear 'beautiful' or 'magnificent' to people, and be aspirational for the students at Buffalo, something is still being hidden from them in the process of their resituation.

Situationist International. 1996. Theory of the Dérive and Other Situationist Writings on the City, ed. by Libero Andreotti and Xavier Costa (Barcelona: Museu d'Art Contemporani de Barcelona).
Posted by Particulations at 18:12 No comments: