The Psychogeography of Other Spaces: St George's Field 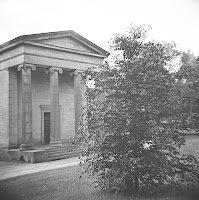 Michel Foucault offers the space and concept of a cemetery as an example of a heterotopia; he explains that it is such because over time the function of the cemetery has changed to reflect the prevailing culture. (2001: 241) At one time being the centre of the city, reflecting a more religious community spirit, in the Victorian times which brought with them not only a more atheistic attitude but also a greater awareness of disease, they were moved to the suburbs. (ibid.) St George's Field (the cemetery at the University of Leeds) as it is discussed on this blogspot, confirms Foucault's second principle of the heterotopia, a historical place that has a determined position within culture, which can then be superseded by another function at a later time (ibid.): in this case, the change of use from graveyard to garden.

What is interesting about St George's Field, is that it not only holds true of the basic principles of what classifies a heterotopic space, it also has further qualities that a 'regular' cemetery might not. These further qualities have come about because of its condition of reuse set out in the 1960s. For example, as Foucault states in his third principle: "The heterotopia is capable of juxtaposing in a single real place several places, several sites that are in themselves incompatible." (ibid.) Is it possible for the cemetery to also be a garden? Can it comfortably be a sanctified place of rest for the dead and also a park-like area, open to all and contained within the boundaries and administrative structure of a university campus? I pose these questions, not because I intend to answer them, but so as to highlight the tensions inherent in the place. These very tensions being what creates a heterotopia in the first place. Foucault describes these simultaneous places as being "foreign to one another" (ibid.) and while the example of the cemetery as a heterotopia is apparent enough, he also provides the garden as an example of a heterotopia, because in antiquity gardens were originally created to represent a small version of the world. (2001: 238) To complicate the space of St George's Field further, the chapel is also a storage place for the university library and even has a library code assigned to it as a storage facility: STCHA. Foucault also classifies libraries as heterotopias, because they represent the modernist concept of "accumulating everything, of establishing a sort of general archive, the will to enclose [...] the idea of constituting a place of all times that is itself outside of time and inaccessible to its ravages". (2001: 242) Maybe this is even more so for St George's Field: since the chapel is already a preserved building, it is even more stable as a place than our high street public libraries, that have been under threat in the past few years. 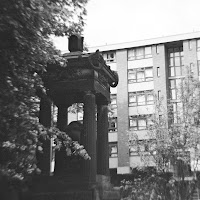 Foucault uses the mirror to explain the relationship with utopias (sites without places) and heterotopias. He describes the mirror as a type of utopia, by his own definition "a placeless place". (2001: 239) The mirror projects us into a place where we are not. However, the mirror is also a heterotopia in the sense that it does exist as a real object in space, enabling us to "discover [our] absence from the place where [we are]", since we can see we are located elsewhere. (ibid.) This has the effect whereby the gaze as it is located in the ground of the reflection, can be traced back towards us as the viewer, via the glass, and back into ourselves through our eyes, where we become restructured. (ibid.) As Foucault states, this has the effect of making the location of the subject conjured in the act of looking at the glass both "absolutely real" and "absolutely unreal". (ibid.) For a heterotopia such as a cemetery, this mirroring effect might also be evoked by the surface of the ground and the gravestones locating 'loved ones'.

The mirroring effect that Foucault mentions, as they relate to a relationship between heterotopias and utopias, is very pertinent to the cemetery, especially in relation to the visitor of a grave. Firstly, because cemeteries, as they were developed in the nineteenth century, were a utopian concept. It was considered that everyone, rich or poor, had a right to a place of burial. Sylvia Barnard explains how the 'guinea graves' (paupers graves) operated in Leeds in Victorian times. These graves contained many bodies, all listed on a single gravestone located above them. The poor would pay approximately a pound to bury their family member, and were assured of a 'proper' burial with their relative listed, in the form of minimal information, on the gravestone. Barnard describes the practice as a "brilliant and humanitarian concept" (2009: 54) Secondly, one can view the surface of cemetery land as a kind of mirror. A visitor to the burial plot of a family member actually gazes at the headstone and the surface of the grave, but, in a sense, they are also looking past the surface to the body below. This produces a recognition inherent in kinship, where one sees oneself in other family members. So the visitor also sees themselves, especially in family plots where a space is also kept available for a spouse who is still alive. Even though married couples are not biologically related, this mirroring could still be considered to occur in the sense that the unit created in marriage produces a projection whereby the other half of the unit reaffirms oneself. So the husband or wife visiting the grave of their partner, sees a reflection of themselves echoing back from the surface in a shadow-like form, a reflection "that enables me to see myself there where I am absent". (Foucault 2001: 240)

Please note: The images shown here, despite looking old, were taken in 2010 with a lomography camera, a Diana F+.

Links:
St George's Field, Fallow Again: A Schizocartography
Dying to Find It: Where is the University Cemetery?

References:
Barnard, Sylvia M. 2009. To Prove I'm Not Forgot: Living and Dying in a Victorian City (Stroud: The History Press).
Foucault, Michel. 2001. 'Of Other Spaces', The Visual Culture Reader, ed. by Nicholas Mirzooeff (London and New York: Routledge). pp. 237-244.
Posted by Particulations at 15:56