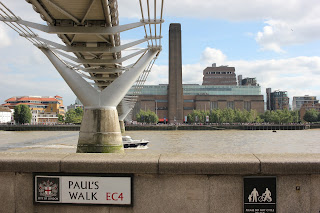 As the train passed the goods yards and graffiti covered walls approaching Euston Station, I again felt the joyous excitement that a visit to a city brings to me. The beginning of a new adventure, wandering around with no set plan, seeing what will happen and where I would end up.

I was travelling with my twin brother John and his friend Brian. They were not psychogeographers, but both enjoy walking and were looking forward to visiting London. We picked up our rucksacks and exited the train. Standing in the station foyer, Brian started to tap his mobile phone, conjuring maps and data from his fingertips, whilst I checked my camera settings. We decided to get the tube to Archway and explore Highgate.

We picked up tube navigation easily enough, but on leaving the station at Archway soon got lost. Brian's phone map started to mess up and he lost direction at a crossroads, walking about with his phone in front of him like a Geiger counter. I was about to suggest that we just wandered, but after five minutes John asked a passer-by for directions.

Climbing up Highgate Hill, a flyer on the pavement advertised the Freud Museum, ahead was the Whittington Stone, a monument marking the point where Dick Whittington heard the Bow bells chime: "Turn again Whittington, thrice Lord Mayor of London". Cutting through Waterlow Park, the area was leafy and luxurious - oozing wealth. Toned bodies in Lycra were all around. More pulled up on racer bikes outside a gated community which was the size of a small village. A man pushed a pram down Parliament Hill, as a woman lifted weights on top. The voices of personal trainers filled Hampstead Heath. The city looked far away again, a spiky graph line. 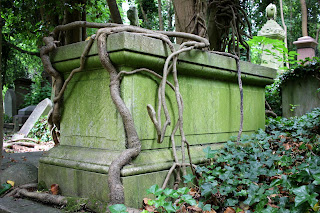 We decided to go on the cemetery tour, which gave a history of the city and how it buried the dead. The tour was enjoyable, with a mix of Hammer Horror, dark catacombs, poisoned Russian spies, the Highgate Vampire, and celebrities from Karl Marx to Jeremy Beadle. Funnelling out of Camden Town tube station like grains of sand in an hour glass, the relaxing pace was broken. John looked panic stricken: "stay together, don't get lost", he said as the barriers were opened and the crowd of passengers swarmed onto Camden High Street. 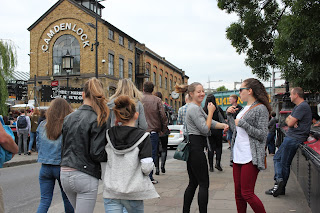 The street was a riot of noise and colour - people flowing in every direction - it was impossible to take it all in at once. John ducked into a souvenir shop looking for a key ring - he needed something solid to hold onto to calm his nerves, after years of weekly shopping at the local supermarket this was a shock for him. Brian was looking for an escape route but the sun was shining on his phone screen rendering it useless. The market looked too crowded, so we headed along the Regents Canal towpath, passing a floating Chinese restaurant and an art deco narrow-boat. Street art and tags adorned the walls. The crowds of people started to thin, passing the London Zoo. Brian examined his phone under the shade of an iron bridge, picking Abbey Road as our next place to head for.