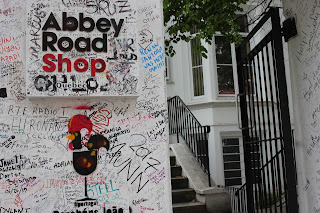 We passed Lords Cricket Ground, with its futuristic pavilion hovering above the brick wall, and came to Abbey Road zebra crossing. A small crowd was on either side of the pavement. As soon as there was a gap in the traffic, they would walk across whilst others took photos. It looked like a never ending loop. I wondered, would this be going on in fifty years’ time, how many were pilgrims performing a kind of religious ritual and how many tourists? I could not name a track from the Beatles Abbey road album myself. It is hard not to become a tourist in London, the city seems designed for tourism. Cross the zebra, peer through the railings at the recording studio, sign the wall, then visit the shop. Abbey Road had become a brand: "the most famous recording studio in the world". I took a photo of John and Brian as they crossed the zebra. They were enjoying themselves again after the hustle and bustle of Camden.

We were back on the tube again heading for Westminster, the pace picking up again. I was starting to miss drifting: travelling on the tube was like being blindfolded, there was no in - between, no sense of distance covered. It felt a bit restricting, but was a fast way to move through the city. Westminster station is a futuristic concrete bunker with beams everywhere, a marvel. I tried to get a photo, but was too slow. Outside an austerity demonstration was ending as tourists posed for selfies with the London Eye as a backdrop. Blair's footprint with a ‘fast track’ option. Crossing over the river the smell of cooking food and the voices of street entertainers filled the air. My jaw dropped as we came to the South Bank Centre. 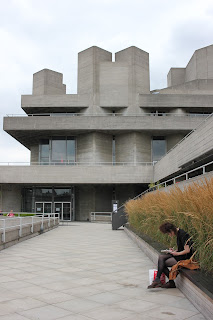 It is described in Barnabas Calder's book Raw Concrete as one of the most gloriously irresponsibly, expressive pieces of architecture ever designed: a shouting spitting punk - architecture for those who do not fear architecture. For me it is also an amazing building, a psychogeographical puzzle box waiting to be solved. It challenges you to explore it and find a way in.

John and Brian started talking about carbuncles and car parks: they liked the shiny new steel and glass structures. We moved on to the National Theatre, described in Raw Concrete as Denys Lasdun's masterpiece of abstract architecture. They looked puzzled as I got my camera out and started to photograph the theatre, as walked towards an outside staircase. 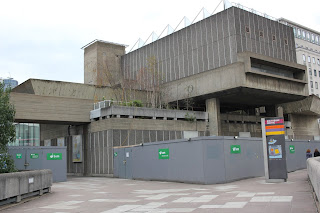 They were now so used to a world of security cameras and guards that they were genuinely amazed by the fact that you could just walk around the building. I was bemused as I walked around the terraces, photographing from every angle, before finding some seats for a break. John wandered into the BFI shop, coming out smiling, with a keyring. Christopher Lee as Dracula, fangs bared with blood smeared around his lips, it tied in perfectly with our earlier visit to Highgate Cemetery. The theatre had a utopian feel: the future seemed hopeful.

It was late afternoon/early evening, the bars and restaurants were filling with fresh-faced people getting ready for the night ahead. We crossed the Thames and began our journey home. The day had been an interesting blend of psychogeography and tourism...
Posted by Particulations at 10:48