"Please feel free to read Anywhere in any way you want and take away from Anywhere whatever you wish; read it as a novel, as a failed conference report, as travel writing, as a meandering guidebook, as a textbook written by a drunken geographer. Or all of these. I hope that everyone, whether on the ground or in their imaginations, will use this book as a guide to making their own journeys in their own 'South Devon'"


This is how Cecile Oak prepares us with her author's note at the beginning of Anywhere: A mythogeography of South Devon and how to walk it (Triarchy Press 2017). So, rather than present a formal review of her new book, I will be taking her literally and choosing some extracts from 'anywhere' in the book as a way of offering an introduction to the text. I would however like to begin with an introduction to the characters in the book and make a comparison with this particular approach to writing with the film Russian Ark (Alexander Sokurov 2002).

This mythogeography of South Devon is explicated through the discussion between Cecile Oak (known as the stranger) and her companion A. J. Salmon (known as the guide). While we are all familiar with Oak's academic lineage and her doctoral thesis, Salmon may not be so familiar to readers. Seemingly, he is both a thief of poetry books and a provider of poetry education - one of these leading him to jail and the other providing him with a distraction while incarcerated in 2009. These characters are comparable to the Narrator and the European in Russian Ark (which also uses this dual narrative technique). In Russian Ark the narrator tells the story, but also has a guide (the European), who acts as a sounding board but also introduces the narrator to Russian works of art, and historical facts and characters, of interest in the film.

Below are some of the urban characters that caught my interest in the book - some living, some inanimate - with images sourced elsewhere. The text is Oak’s... 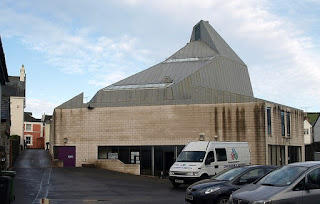 “There are a lot of hypnotic objects to be dealt with in Buckfastleigh before we can get out. The brutalist church with a chain running out of a gutter and down the back of the building and through the grilled of a large drain. We decide it isn’t mechanical, but there simply to guide the stream of water into the drain, A thin drizzle is starting to fall, we watch how the water flows from link to link…” (page 300) 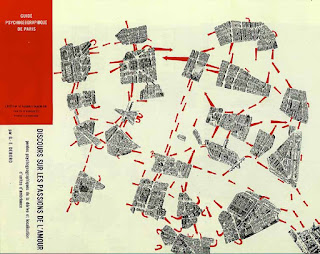 “Frustratingly – or maybe this is why it serves everyone so well! – there is very little documentation on these situationist wanders. And [Andrea] Gibbons has the reason. It’s directly attributable to the failure of the Situationists to defend their Algerian comrade Abdhelhafid Khatib after his psychogeographic survey of Les Halles was cut short by arrest (in the context of the Algerian War this constituted an existential threat to Khatib); instead the Situationists seem to have closed down the whole project.” (page 199) 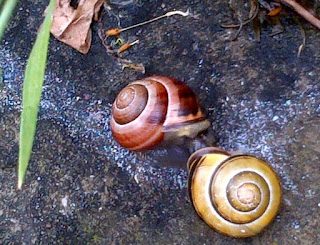 “There are two kinds of patterns in the water. The reflection that transports a here to a there, reproduces itself, but also replaces somewhere else with itself. When that kind of reflection is the main metaphor for comparing and connecting things, it reinforces analogy, homogeneity and conformity…[The] second pattern: diffraction is a kind of dynamism in the matter of the world. It is what the theorist Donna Haraway calls a 'metaphor for the effort to make a difference in the world'. This works all the way down, so at a certain level, incredibly small things overlap, interfere, and make a difference all on their own.” (page 79) 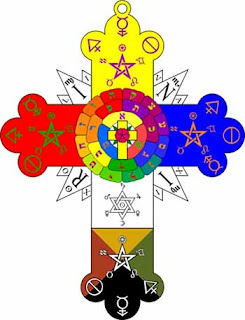 Rosy Cross of the Golden Dawn

“On the bricked floor of the parking space are symbols set around a Kabbalah ‘tree of life’…When I put the images up on Facebook later a ‘friend’ comments that the combination of symbols is characteristic of the Hermetic Order of the Golden Dawn. Hmm… Someone else posts that these are symbols of a spirituality of light generated from an “electrical pivotal point”, not the sun, not the centre. Could we be talking about diffraction here? My correspondent guides me to a Plymouth University astronomer called Percy Seymour. When I look him up he seems to have been a fairly conventional academic, studying magnetic fields around planetary objects, until he suddenly ‘flipped’ and began to interpret everything, including human personality, as subject to the magnetic and gravitational fields of the sun and the planets.” (page 160).
Posted by Particulations at 16:59