The Ruined Institution: The Production of ‘Excellence’ in Higher Education – Part 3 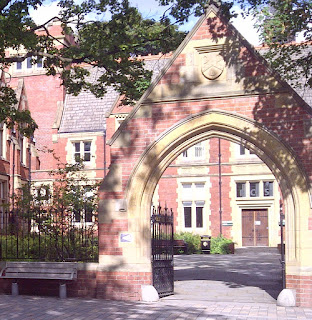 (this is the final part of this series of posts)

Since the Enlightenment the university’s relationship with industry has grown out of a direct response to an economic need. This meant the university reacted to the demands for a certain type of knowledge requirement. In postmodernity the university has acquired the mantle of a business-oriented philosophy in its own right, meaning that attempting to demarcate commerce and HE as separate entities is far more complex. In order to compete in a globalised market the contemporary university is expected to think and operate as if it were a business: it has to take up the procedures and practices of commerce. As far back as 1990 academics were writing about the application of a commercial formula to every aspect of education. Cynthia Hardy says:

The tough choices advocated in business literature are likely to escalate the political conflict that surrounds declining resources, not resolve it. Draconian measures – terminations and program closures – can send shock waves through the university community. The more marketable individuals will leave to find less hostile surroundings; potential recruits will resort to political infighting, as they try to protect their departments. (1990: 317)

Hardy’s comments imply a potential move by many academics into other professions with those remaining having to become defensive in order to protect themselves and their future within the institution.

These illustrations are provided so as to emphasise that the current period of austerity is situated within the greater issue of how organisations operate under neoliberalism in general and their response to politico-economic events. While cuts to funding in HE are going to have an impact on those studying and working at the university, the effects of capitalist oriented processes on those at the university can be both subtle and furtive.

Mark Fisher makes direct reference to university bureaucracy, including providing an extensive list of documents a module leader is required to complete for each module they oversee (2009: 41). He says that the constant checking, monitoring and production of figures does not provide “a direct comparison of workers’ performance or output, but a comparison between the audited representation of that performance and output” (2009: 42). Mary Evans puts it succinctly: “Since God no longer exists, we have invented assessment” (2004: 34). Evans says of both the Jarratt Report (1985) and the Dearing Report (1997) that they imposed “upon universities a quasi-democratic ethos of collusion with the values of a market economy” (2004: 23). Consensus is all that is needed to enable bureaucracy’s seamless transition: “The ‘right’ process is established, the rules of the game set, and what is then required are cooperative and consenting players” (2004: 62).

Dissent becomes difficult in a system that sees the student as consumer, service and product of the system (Fisher 2009: 42), because the ability of students or staff to direct any grievance to a recognisable figurehead is difficult. Any challenge of/to the system simply points to another set of figures, attached to which are a set of further criteria. Or, instead, the result of the query may just appear as a re-framing and re-presentation of that data back to the enquirer: “the best performativity [...] comes rather from arranging the data in a new way” (Lyotard 2004: 51). Bureaucracy, as an instrument for measuring excellence in the corporatised university, as Fisher describes, “floats freely, independent of any external authority” (2009: 50). It produces a style of surveillance culture for academics that is rather like an invisible postmodern semblance of the time and motion study that constantly hovers over them in the form of a bureaucratic superego.

This constant checking is part of the everyday administration of the contemporary university which attempts to measure production in the same way that a factory would through the use of the nebulous term ‘excellence’. The use of the term ‘excellence’ has changed over time. For example, in the transcription of a lecture given in 1991 at The Centre for the Study of Theology at the University of Essex, David Jenkins (the Bishop of Durham), uses it quite differently. This lecture is entitled ‘Price, Cost, Excellence and Worth – Can the Idea of the University Survive the Force of the Market?’ While it offers a critique of the corporatised university, Jenkins uses the term ‘excellence’ in a similar way to how the term ‘mastery’ might be used: “everything is concerned with ‘price and cost’ and not with ‘excellence and worth’” (Jenkins 1991: 31). It is likely that the term ‘excellence’ has become appropriated by corporations (and the university) because of its convenient vagueness. The pervasive audit culture enables a form of micro-management without the manager appearing in bodily form. Richard Hill says that technology has enabled this ideology to proliferate, since administrators are often no longer needed to carry out many tasks on the behalf of academics, now measuring forms are often online and accessible by all through their desktop computer (2012: 172).

Hill highlights the common use of the word ‘excellence’ in taglines and slogans used by universities, providing examples from Australian HE institutions: “‘Integrity, Respect, Rational Enquiry, Personal Excellence’ (Edith Cowan University): ‘In the pursuit of excellence in teaching and research’ (Griffith University): and ‘Excellence, Innovation, Diversity’ (University of Wollongong)” (2012: 60). He describes this as “corporate-speak” and while he uses a flippant writing style to explain how these taglines operate on the unconscious, he nevertheless hits upon a significant point in regard to how language is linked to how we view the world: these “phrases [...] send certain images racing through the collective psyche of prospective students in the hope of instilling some sort of lasting semiotic effect” (ibid.). And this is apparent when Readings states: “the question of the University is only the question of relative value-for-money, the question posed to a student who is situated entirely as a consumer” (Readings 1999: 27).

Bibliography:
Evans, Mary. 2004. Killing Thinking: The Death of the Universities (London and New York: Continuum).
Fisher, Mark. 2009. Capitalist Realism: Is there no alternative? (Winchester: Zero Books).
Hardy, Cynthia, ‘‘Hard’ Decisions and ‘Tough’ Choices: The Business Approach to University Decline’, HE, 20, 3 (1990), 301-321.
Hill, Richard. 2012. Whackademia: An Insider’s Account of the Troubled University (Sydney: New South Publishing).
Jenkins, David. 1991. Price, Cost, Excellence and Worth – Can the idea of the University survive the force of the Market? (Colchester: The University of Essex).
Lyotard, Jean-François. 2004. The Postmodern Condition: A Report on Knowledge, trans. by Geoff Bennington and Brian Massumi (Manchester: Manchester University Press).