Get Me Out: Between the Zoo and the Research Project 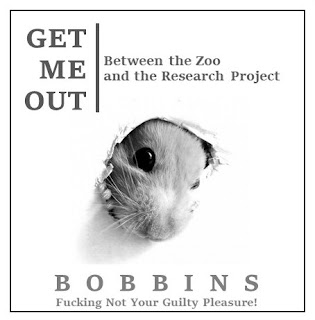 For part 1 of this series of blog posts, please click here: Part 1 - Manchester.

I didn’t plan on a series of Guilty Pleasures CDs when creating the first one, but when I got to thinking about the subject for this CD – animals – I decided to keep the brand style of the Manchester one. This meant the layout would need stay the same and also the text. So, Get Me Out needed a subtitle that sounded something like ‘Between the Rollerama and the Junk Yard” and I chose “Between the Zoo and the Research Project”. This then meant that the CD was going to be animal activist in origin and the tagline at the bottom of the cover needed to incorporate ‘guilty pleasure’ somehow. Hence began the radical bent (and the ironic tone) of my Guilty Pleasures Series. 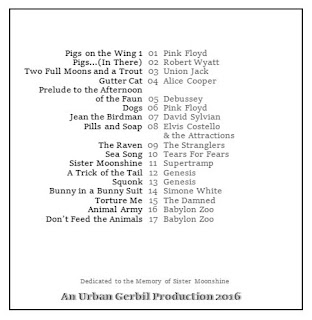 I alluded to the kitsch nature of Sean Rowley’s Guilty Pleasures series in part 1 of the blog and said I would talk more about it here. Theodor Adorno describes kitsch as being ideological. This ideology appears as a momentary revisiting of the past in the form of what Adorno calls “musical small change” (2002: 503). They are fetishised elements that get circulated (in the case of Guilty Pleasures these elements are the old songs themselves). The tracks from the past become uprooted, re-contextualised and re-circulated. They are dished up to the music fan of the day without their historical roots being made apparent. This is what Richard Leppert says about kitsch music:


Kitsch invokes a past which is nostalgically remembered; as such kitsch is a means by which to forget – but less to forget the past than the present. Kitsch offers consolation, not so as to change everything but to make the anything of the here and now slightly more tolerable. (2002: 361)

Leppert describes this past/present that is forgotten as “selectively (mis)remembered”, and he explains that kitsch, for Adorno, is problematic because its relationship to history is not direct and therefore the truth of history is not spoken (2002: 363). 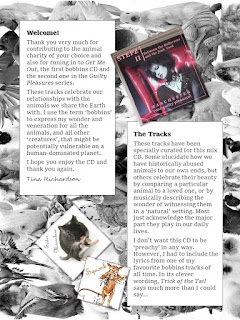 My being a fan of Rowley’s Guilty Pleasures series has been complicated by my own critique of it. The research I have carried out on kitsch has been illuminated by Adorno’s critique of popular music in general - also Sigmund Freud’s theories on guilt, pleasure, and so on (more about Freud in the next blog). However, I believe my own series of CDs, in the context they are presented, probably get around many of these problems. Urban Gerbil’s Guilty Pleasures is a) re-presenting of the music in a radical format b) using the ‘guilty pleasures’ label in an sardonic and reflexive way and c) is designed to make the listener think about the subject-matter presented to them via the packaging and the specially selected tracks.

The next blog will be about work and labour.