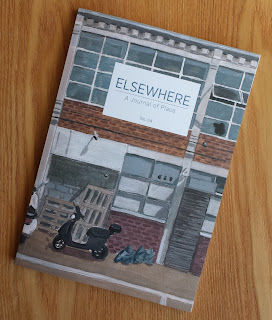 Elsewhere: A Journal of Place is now on its fourth edition. The journal is beautifully designed. I have a hard copy - a hard copy version of a journal is a rare thing in academia, where we mostly access journals online. Many academic journal are not particularly aesthetically pleasing, often having an uninspiring cover, a ‘traditional’ layout and little in terms of images. Not only does Elsewhere have a lovely cover, but there are beautiful images throughout (see below) and the journal is richly illustrated in both black and white, and full colour. 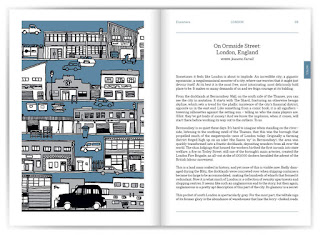 This particular edition concentrates on mapping and includes geographical places such as Wales, Australia and Madeira. Subjects comprise: post-industrial inner London, community mapping, walking in the post Eastern-bloc city and an interview with a cartographer. The introduction to this edition states:


Maps can be political tools, drawing boundaries to be debated across contested territory. In mapping the land they can offer the promise of riches in the natural resources that are waiting to be exploited, as well helping us understand better a landscape and the communities that call it home. At the same time, this knowledge can threaten the social and economic systems that already exist, threatening communities and creating conflict. Maps are not neutral, and their distortions or omissions can have profound consequences. (Paul Scraton and Julie Stone)

This final sentence draws to mind Mark Monmonier’s famous book on cartography: How to Lie With Maps (1991). It opens, thus: “Not only is it easy to lie with maps, it is essential".While I’m not a cartographer, maps and map-making are a fundamental part of psychogeography, so they have been of interest to me for as long as I have been in academia. I have made my own maps (and had them published), ran emotional mapping workshops and given lectures on maps. While not a cartographer, I am a schizocartographer. Schizocartography is underpinned by the concept of desire that is a key theme of the work of the psychoanalyst turned philosopher Félix Guattari. So, I am especially interested in forms of subjective mapping (cognitive, vernacular, emotional), such as the article in this edition of Elsewhere entitled ‘Community mapping and nation building: Papua, Indonesia’. This is what the author says:


The act of mapping is tacit acknowledgement of the reality of modern systems, and the relenting need to define, categorise, administer and manage…The necessity for mapping is borne from a world that tells entire communities that what they know of themselves and their surroundings is not enough, is not real, not in any way that counts. (Ho Ming So Denduangrudee)

This is a salient reminder of the modernist cartographic project, its history and its effects. But, the various forms of vernacular mapping that are employed as a counter movement are both enabling and offer hope.
Posted by Particulations at 16:05