STEPZ II: Between the Rollerama and the Junkyard 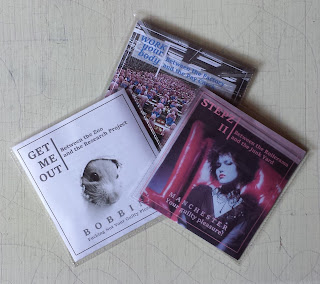 This is the new Urban Gerbil Publications mixCD series. The previous series – psy(co)motion – was a collection that was inspired by psychogeography. After five CDs I felt that psy(co)motion had reached its limit (in regards to my own music collection, but also for other reasons) and I needed to await the emergence of the next theme which would come about through something that inspired me. I’m afraid you will not be able to find out about psy(co)motion at this time, as it will be featured in an academic book on creative geographies which I will be writing a chapter for. However, I can tell you more about Guilty Pleasures. 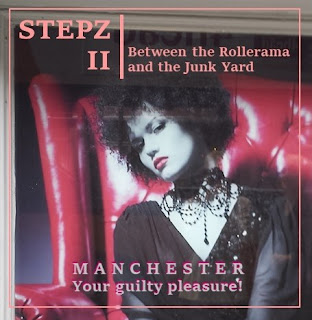 Guilty Pleasures began with a CD that was inspired by the work Ally Standing and myself did for the 'Loitering With Intent Exhibition' at the People’s History Museum in Manchester (summer 2016). We created a zine and artwork based on the city of Manchester, psychogeography and the work of John Cooper Clarke. Entitled STEPZ II: Between the Rollerama and the Junk Yard our exhibition submission inspired a CD of the same name. As well as music by Mancunian artists, the CD also included poems read out by the authors who contributed to the zine (see tracks 03, 07 and 11 below by Steve Kettle, G N Deans and Sophie Sparham). 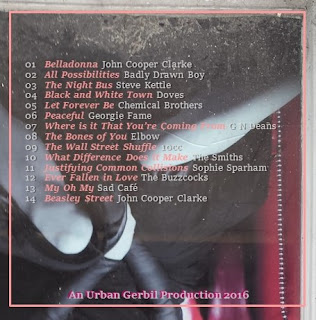 I became interested in the music genre Guilty Pleasures (now a global brand) a few years ago and have written a number of essays and blogs on the subject from both a Freudian and Adornian perspective. Created by the DJ Sean Rowley, the brand inspired compilation CDs and club nights in the UK and abroad (I have attended the Leeds club nights in the past and I also own some of the CDs). As a music style it is interested in music that the listener likes but that is considered to have low cultural value: music that might be considered ‘uncool’ ('bad taste' would be a kitsch description - more on kitsch in the next post). In its initial incarnation Rowley’s Guilty Pleasures reflected the singer-songwriter music of the 1970s and early 1980s. It then evolved into practically any type of music from that period up to today, very often music that would be described as ‘cheese’. According to the Guilty Pleasures website:


Sean Rowley began the night in the 150 capacity Hammersmith Working Men’s Club in 2004 and, discovering he was not alone in his love for ELO and Hall & Oates, moved the night to the Islington Academy where it resided for 2005 culminating in a Christmas party which saw Charlotte Church and Terry Hall take to the stage to sing.

The sleeve covers of Rowley’s CDs usually show females in ‘seductive’ poses. So, it was really choosing the image for the STEPZ II CD that made me think of the Guilty Pleasures CDs produced by Rowley. The image on my CD cover above is actually a photo I took while doing research in Manchester with Ally Standing prior to submitting our work to the exhibition. I decided to use it because it was roughly twice the proportion of one side of a CD, which meant I could then fold it back and it would become the whole image for both sides of the CD sleeve. It was actually a large poster that fitted inside a filled-in window in Manchester city centre (see below). 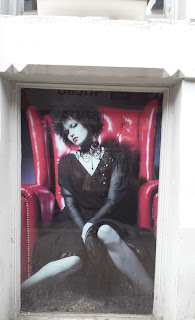 Once I had chosen the cover for the CD, I then added the cheeky text at the bottom of the CD: “MANCHESTER: Your guilty pleasure!” and that was the beginning of the series. The next CD I produced was about animals, and you can read about that in the next blog along with some theory on kitsch.
Posted by Particulations at 14:10