Work Your Body: Between the Factory and the Pay Check 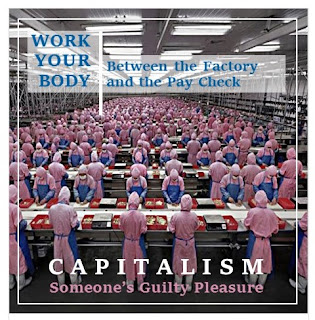 This is the third mixCD in the series and takes a look and work and labour within the third stage of capitalism or late capitalism (Frederic Jameson). It includes music from the 1970s up till today: for example, we have The Strawbs Part of the Union (1973) and also Jungle’s Busy Earning (2014). 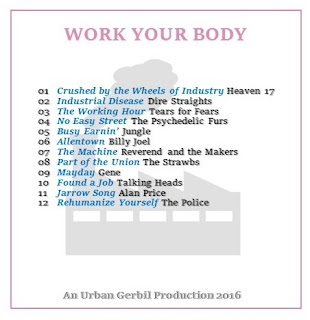 Like the animal CD, previously, this one is of an ‘activist’ nature and it comes with an insert which says:


Work Your Body is inspired by an intervention by Ally Standing and Gavin Rogers that took place at the Fourth World Congress of Psychogeography in 2016. Their performance, on the street in Huddersfield (UK), was a response to Dr. Alex Bridger’s walk which questioned the Northern Powerhouse. Rogers and Standing suggested that in postmodernity ‘professionals’, who were no longer able to use up excess energy by working in jobs that required manual labour, worked their bodies in other ways, such as at the gym.

In his book Postmodernism or the Cultural Logic of Late Capitalism (1991) Jameson explains that in postmodernity people are abstracted from reality because of how capital operates. He believes we need a cognitive map to help us negotiate this new terrain and give us access to the reality that we cannot reach through the mediated representations that are directed to us. Standing and Rogers' intervention cleverly brings this to our attention. Louis Althusser describes our ideologically oriented subjectivity as being “the representation of the subject’s Imaginary relationship to his or her Real conditions of existence” and their intervention momentarily lifted this veil. 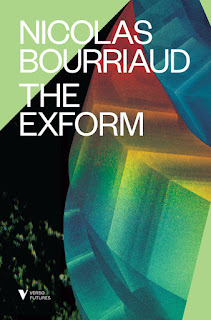 Co-incidentally, the day that I wrote this post, Nicolas Bourriaud’s new book Exform (2016) landed on my doormat. This book is inspired by the work of Althusser and on the matter at hand he says:


Free time belongs to the universe of what production has discarded – except when it can be channelled towards leisure that generates new profits…Today, the proletarian is defined as the consumer-of-the-world, pure and simple; his original patch of land – which Fordist-era factories provided so that he would employ free time in a useful manner – has assumed the immense dimensions of the ‘world of leisure’.

While this only represents part of the story of Standing and Rogers intervention – the defunct proletariat turned user of commodities, rather than the producer of them – it does not theoretically take care of the expending of energy which their intervention suggests replaces the physicality of factory work. However, this article in The Guardian looks at how we may be able to make even more profit out of gym users by actually turning them into simultaneous consumer-labourers through the kinetic energy produced from their bodies: The fat-burning and energy-producing gyms. This means the subject is no longer replacing their need to expend energy in the gym, post-industrialisation, but is instead being profited from twice: gym-user-cum-labourer. Hurrah for capitalism!
Posted by Particulations at 15:19