The Atlas of Improbable Places: A Fantastic Voyage into the Body-Politic 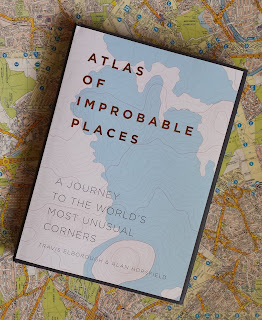 While the dictionary states that ‘improbable’ means “Not likely to be true or happen. Unexpected and apparently inauthentic”, the Improbability Principle states that “extremely improbable events are commonplace” (David Hand – statistician). So what does Travis Elborough and Alan Horsfield’s Atlas of Improbable Places: A Journey to the World’s Most Unusual Corners tell us about “the obscure and bizarre, the beautiful and estranged” places contained therein? Well, perhaps there are more improbable places than we knew existed. Elborough (writer) and Horsfield (cartographer) educate us in improbable places through their atlas, categorising these unusual, surprising and secretive phenomenon under headings such as architectural oddities, floating worlds and deserted destinations.

Covering a multitude of types of places, from off-grid or hidden spaces to underground or abandoned settlements, the book takes us on a fantastic voyage through its beautiful pages of stylishly formatted text, maps and photos. Every place discussed has a map, grid reference, description and image. We have photos ranging from the words of God to spooky doll heads, showing all sorts of places like underground railways and lost kingdoms.

While it’s difficult to pick my favourite one out of the fifty-one described, I’m going to discuss Concrete City because I have an interest in towns that are especially built for workers, such as Fordlândia (Henry Ford’s prefabricated town from the early part of the 20th century). 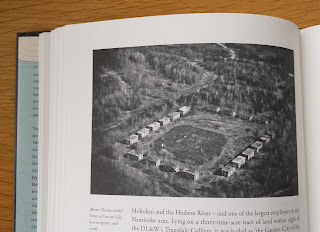 ‘Concrete City: Garden City of the Anthracite Region’ is in Pennsylvania, US (see above image). Elborough explains that Concrete City was built in 1911 by the Delaware, Lackawanna and Western rail/mining project. It is both a new town and also part of the garden city movement created by Ebenezer Howard. The workers’ town was set for demolition in 1924, following a litany of issues relating to damp, poor sanitation and so on. However, it proved hard to destroy despite much dynamite and still remains today, now recognised as having cultural value. You can see some more images of Concrete City here.

What in particular interests me about places like Concrete City and Fordlândia is that they arise as a response to the understanding that taking care of your workers is beneficial in terms of profit. Both these new towns arose in the period of post-Victorian industrialisation. We are still in the second stage of capitalism at this time, what some theorists describe as “the family wage economy”, where the husband’s income supports the whole family. We haven’t yet reached the post-World War II consumer economy where women are more widely employed, start to leave the confines of the home and are considered consumers in their own right.

In terms of a cultural theoretical critique of these townships, one can’t help but see the downside of this being one of control of the body-politic. Power structures are materially embedded and the housing provided by 'the company' exerts more control over the worker than would be the case if the properties were not owned by the same organisation that the labourers work for. I wonder if there was also perhaps some of Jeremy Bentham’s panopticon at work here, too. In Concrete City the oblong layout of the houses means they are all looking in towards a centre, and hence at each other (self surveillance). Actually, this takes us to another of the improbable places in the book, Presidio Modelo a former prison in Cuba. Its circular buildings epitomise the panopticon (see the model of the panopticon below).

For Michel Foucault, the body-politic is: “a set of material elements and techniques that serve as weapons, relays, communications routes and supports for the power and knowledge relations that invest human bodies and subjugate them by turning them into objects of knowledge” (1991: 28). Foucault explains that thinking of power and knowledge as separate from each other and that they exist in detached domains is a mistake. In fact “power produces knowledge” (1991: 27). He explains: “there is no power relation without the correlative constitution of a field of knowledge, nor any knowledge that does no presuppose and constitute at the same time power relations.” (ibid.). This reciprocal power/knowledge process involves the knowing subject, the known object and also the modes used in the procurement of that knowledge. This works in regards to knowledge of the individual, in particular the body.

You can see how this applies to the prison system, but I believe it applies to these types of new towns, too. This is what Foucault describes as “political anatomy” (1991: 28). However, he makes it clear that this is a procedure that does not decontextualise the subject, or the body: it is the analysis of a process - the body-politic - which means the individual cannot be removed from this activity and examined on their own in terms of power. They are only known in regards to this power dynamic and not in their own right. Although, we can never be known ‘in our own right’ as we always exist in apparatuses that exert power through ideology (Louis Althusser): for instance, even within the private place of the family.

Bibliography:
Foucault, Michel. 1991. Discipline and Punish: The Birth of the Prison, trans. by Alan Sheridan (London: Penguin Books).
Posted by Particulations at 10:52