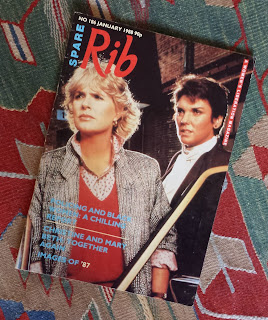 I have just acquired my first copy of Spare Rib (1972-1993) - the January 1988 edition. There were quite a few available on the well-known online auction site, but I chose this one because 1987 was the year I moved to London and I thought the content would resonate with me since it was a significant life event and my memories of that time would hopefully be well-entrenched. This post, as well as taking an overall look at the magazine, will compare some of the events mentioned with what is taking place socio-politically today. 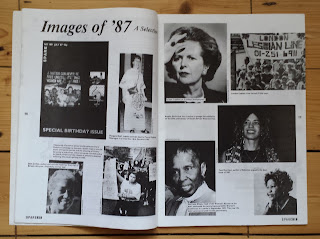 No surprise that the ‘Images of ‘87’ include Margaret Thatcher, but they also include Toni Morrison and Martina Navratilova. Black and lesbian women are really well-represented in this section which covers 3 double-page spreads. It also includes Dianne Abbot, with the caption "Britain’s first Black woman MP". 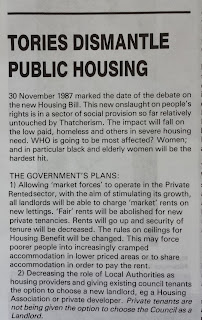 Some things never change. Despite David Cameron’s promise of more housing (after Thatcher’s decimation of the public housing system in the 1980s, which it has never recovered from), it has become apparent that the numbers do not add up. In terms of the real numbers of houses, the current promise for more affordable housing actually includes the quantity that had already previously been promised. Also, the dismantling of the council tenant housing system continues. 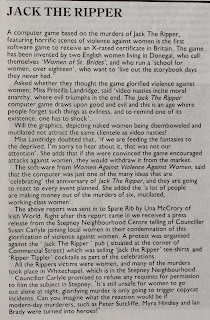 This edition of Spare Rib also includes an article on a new computer game called Jack the Ripper. The writer was concerned that the horrific graphics would attract the ‘video nasty’ clientele and the article includes a quote from an organisation known as Women Against Violence Against Women: “a lot of people are making money out of the murders of six, mutilated, working-class women”. Zoom ahead 27 years and you have the new Jack the Ripper Museum in London, doing the very same. I remember the controversy at the time of its proposal and I signed one of the online petitions. Apparently the architect was duped over its use when he was involved in its design. He says the plan was sold to him as a museum of women’s history and described it as “salacious, misogynist rubbish” (Andrew Waugh). So, I think we can safely say some things never change, but also that the founder of the museum, Mark Palmer-Edgecumbe, is a salacious misogynist despite previously being - unbelievably - a regional Head of Diversity at Google!

I’d like to include some of the quotes of the previous year. Below are a section of my favourite ones, plus my commentary:

“I have never squealed or complained, not once” Margaret Thatcher

Maybe not, but there were definitely tears as you left No. 10!

“Come on, any woman would be thrilled to be a sex symbol and me at forty” Edwina Currie

“In my experience men have had their clothes off a lot quicker than I did. In films it’s usually the reverse” Cybil Shepherd

Well, ironing is not the preserve of women, but we get your point Dr Barnardo’s worker! 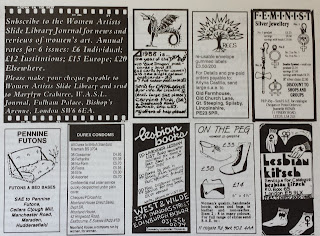