Gary Genosko describes Guattari's transversality as “the tool used to open hitherto closed logics and hierarchies.” (2008: 54) In a section of his book Félix Guattari: An Abberrant Introduction entitled 'Extension', Genosko discusses urban space and walking. He explains that a “transversal territory” which operates within unconventional power structures “is the site of pure potentiality and marked by such valorized terms as 'transgress' – 'deviate' – 'defy' – 'cut across' – 'disorganize' – 'smooth space'.” (Genosko 2002: 57) He says that this mode of operating in space provides an alternative form of articulation, providing one with a different self to that which is expected by the dominant powers in the capitalistic city. (2002: 58)

The act of traversing is a good example of a physical act of transversality. In mountaineering, traversing is the term used to describe how one moves sideways across a rock face, as can be seen below. This photo - taken in 2011 with a Diana F+ - shows a student who is traversing the old wall of the cemetery which now forms part of the base of the Henry Price Halls of Residence on the northern border of the University of Leeds cemetery St George's Field. This wall is located under the Henry Price building and the beams of the building can be seen in the top of the images. It is made from the original bricks of the cemetery wall and follows the original line. 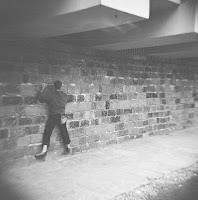 Traverse is described in the Oxford English Dictionary as: "to pass or journey across, over, or through; to pass through (a region) from side to side, or from end to end". However it is further described as a type of writing: "To trace [...] continuously without lifting the pen or pencil", as a way of negotiation life: "To 'go through' life (life, time or anything figured as extended space or region)" and a form of reading: "to read through or consider thoroughly". This act of traversing in the cemetery also satisfies Genosko's list of verbs above in cutting across and deviating from the usual paths through the space. It is also an act of defiance and while the notices on the outside of the cemetery only forbid ball games, it is possible that traversing may be considered a transgressive act also. While the traversing student may not intentionally be acting defiantly, he does challenge the use of the space and also provides a new route that is inspired by his own subjective desire to respond to the environment in an unconventional way: "Transversality in the group is a dimension opposite and complementary to the structures that generate pyramidal hierarchization and sterile ways of transmitting messages." (1984: 22)

For Guattari it is desire that enables creativity to be expressed and challenges the accepted, and dominant, logic of a given situation. Desire is the productive, and constructive, force of life: "I propose to denominate as desire all forms of the will to live, the will to create, the will to love, the will to invent another society, another perception of the world, and another value system." (Guattari 2008: 318) To the student it might not be apparent they are crawling along the walls of the old cemetery, merely the wall of a modern building. Nevertheless, the very act itself questions both the permissions and power attached to allowing, and preventing, certain behaviours in particular places, and also the underlying logos of the space in the sense that individuals have certain 'common sense' actions expected of them.

Desire finds a route via transversality, allowing it to be released from overriding social forms that attempt to regulate the subjectivity of the individual.

Links:
St George's Field Fallow Again: A Schizocartography
The Psychogeography of Other Spaces