The North/South Divide: Heterotopias of Illusion and Compensation in Leeds

Last week I was fortunate enough to be interviewed for an upcoming BBC Radio 4 programme on the North/South divide. So, on Thursday 26th of February the radio producer Mary Ward-Lowery and the insomniac writer-psychogeographer Ian Marchant came 'ooop norfff' to walk and talk with me in Leeds.

After researching Danny Dorling's work in this area, where the above map comes from, I decided to take them on a walk that looks at the north/south enclaves within these areas. For instance, a north/south divide actually within the north. I chose the border of Holbeck Urban Village and Holbeck 'proper'.

While I didn't take any photos on the walk, it is an area I have spent much time in before, so all the photos in this blog are of Holbeck in Leeds. The first photo below is from the, now, 'trendy' urban village, emerging as a post-yuppy space with modern flats for 'young professionals' and new-media companies. The other image is taken in the 'old' Holbeck itself, the streets where the people live while the redbrick terraces are being pulled down around them. 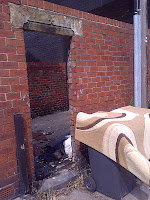 On the walk I decided to compare these adjacent areas with the similar, but much larger project at the Isle of Dogs in London, Canary Wharf. This area in Leeds does include Granary Wharf, so it's not that much of a stretch. London has its One Canada Square and we have our Bridgewater Place.

While I have lots to say about these postmodern urban village projects and how they effect the local community, what I would like to do is comment on this situation from the perspective of Michel Foucault and Cindi Katz. I won't include my deconstructive comments on borders and space that were part of the interview, as I think they could be included in the radio show, but will add to the border dichotomy by including some work I have done on space in the last week since the radio interview. 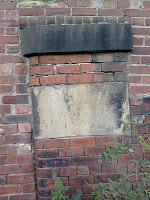 Katz explains how the process of privatizing space is at the heart of the neoliberalist project such that this raises important issues in relation to place and meaning. This is also remarked upon by Foucault. When commenting on the "human site" he says that it is a function of our times that a certain type of knowledge is required when examining space, such that "knowing what relations of propinquity, what type of storage, circulation, marking, and classification of human elements should be adopted in a given situation in order to achieve a given end." (2001: 238) This becomes pertinent when applied to the process of capital accumulation inasmuch as when the "given end" is the project of acquiring space, then a knowledge of how processes such as "circulation" and "marking" operate become useful in altering the appearance of spaces such that they manifest in a new way, occluding their socio-historical origins. 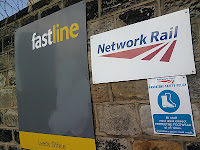 As Katz explains, this appears in the form of a "visible monumentality [that] is built on rendering invisible those who are on the losing end of the great and growing divide between rich and poor". (2001: 103) Foucault touches upon these binary states as they relate to heterotopias. He discusses how, in a deconstructive way, the act of creating a space forms partitions that define both sides of these boundaries: for example, defining an illusory space will reaffirm a real space, and, he continues: "Or [...] creat[ing] a space that is other, another real space, as perfect, as meticulous, as well arranged as ours is messy, ill constructed, and jumbled." (2001: 243) Foucault describes these two types of spaces as heterotopias of "illusion" (the former) and "compensation" (the latter). (ibid.) Which become particularly relevant in regards to the regeneration project in Holbeck. 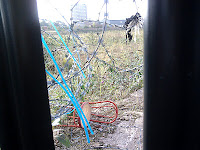 Katz uses terms such as "reordering", "regulation" and "sanitation" when discussing the rhetoric attached to these projects. (2001: 102) She explains that this compensatory function has the effect of organising space and the lived experience, such that it fits into a specific agenda. (ibid.) The colonially occupied space of Holbeck is becoming a heterotopia of compensation, in the process of being marked by its new occupiers.

Links:
Spitfires on the Line
The North South Divide - Where is the Line?