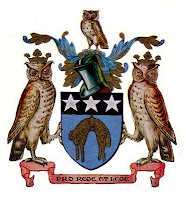 (thanks to Leeds Owl Trail for the above image)

Tuesday July 27th 7.00pm. Members of the Leeds Psychogeography Group (10 of us in total) set off from the steps of the Civic Hall in Millennium Square, Leeds. We were following the established walk created by the Leeds Owl Trail group.

This blog is a subjective response to findings on the walk, not necessarily of an owl(ine) character, but rather more psychogeographical. It in no way replaces the brilliant trail charted by Leeds Owl Trail group who can be found here:

We started our trail in Millennium Square, home of the big golden civic owls that are so familiar to Leeds citizens and visitors. As you can see from the image below, a sign on the edge of Millennium Square has a long list of byelaws attributed to this public space: 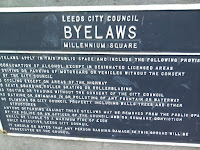 The link below takes you to the Leeds City Council byelaws for public spaces. It's 60 pages long. However, it does have a nice image of the Leeds coat of arms – and obviously our lovely Leeds owls – on the front cover.

I scanned through the contents page to find the most interesting restrictions. This is what it says under 'missiles':

“No person shall throw or use any device to propel or discharge in the ground any object which is liable to cause injury to any other person.”

“No person shall without the consent of the Council turn out or permit any animal for which he is responsible to graze in the ground.”

I photographed two blue plaques on the walk. The first one was for Samuel Smiles and was outside the museum: 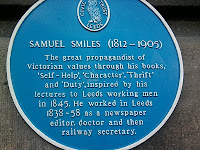 It seems Samuel Smiles, despite being a Victorian, wrote some quite hippyish books, one, in fact, called Self Help. According to wikipedia he was the editor of Leeds Times and was a supporter of women's suffrage. So, an all round good egg who probably could well have been a hippy before his time.

The other plaque was outside the Quebecs Hotel, a lovely building of red brick. It had previously been the Leeds and County Liberal Club. The very kind concierge let us go in and look at the owls on the stained glass window on the fabulous staircase. 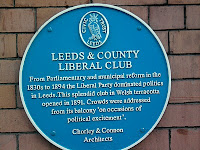 According to wikipedia Quebecs Hotel is a Grade II listed building. It seems to be a 'boutique' hotel and the reviews look excellent. The interior is lovely. Apparently it was voted by the independent in 2007 as one of the best 50 British Hotels. I wonder if they have a public bar:

Here is a good picture of the foyer I found online:


An Owls Eye View of Leeds

Since this was an Owl Trail I feel I should include the only two relatively good photos that I pulled off my phone. The first one was in Millennium Square. 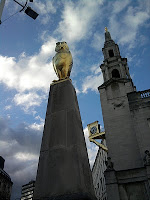 The one below was on the fence outside the library in Calverley Street. These owls were all along the fencing on that side of the building 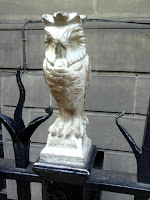 Apparently there are real owls at Leeds Royal Armouries. According to the website they have an Eagle Owl and an African Spotted Owl.

I typed 'Bungle' in to the Leeds Royal Armouries search engine to see if I could find the owl that is mentioned on the Owl Trail site, but nothing came up. I do hope this doesn't mean that the lovely Bungle has gone to the great owl barn in the sky. Bungle is a European Eagle Owl, so I think he must be the one mentioned on the Royal Armouries site. Here is a picture of Bungle looking very proud:

According to the Leeds Owl Trail site Bungle likes: “To have a bath and he bathes himself by splashing around in water” and spends 5 months of the year chilling out while waiting for the season to start again at the Royal Armouries. It's alright for some...

Leeds has its own tapestry in the Leeds Central Library: Leeds Tapestry 2000 http://www.leedstapestry.org.uk/index.php. It consists of a number of tapestries made by the local community. The tapestries are beautiful and must have taken a great many hours and much care to create:

Here is Barbara Walker's blog on the Leeds Tapestries:

Barbara has kindly given me permission to include the following owl images from her site: 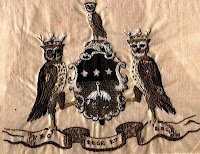 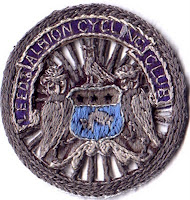 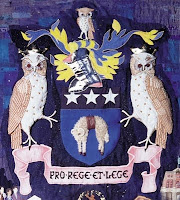 We finished our evening at the Scarborough Hotel pub, which is near the station. It is Victorian pub that is tiled on the outside. This is a great photo:

If you are into real ale you can see the beer ratings below. There is also a good picture of the pub sign:

I'd like to finish with a short video of a European Eagle Owl and a song by Gerry Rafferty. This is one of Bungle's relatives who lives at the University of Bristol. Here is Oscar doing his daily ablutions:

And here's Gerry Rafferty's Night Owl and an interesting yet bizarre image, from the album cover, of Rafferty with his guitar lounging on the back of an owl:

Night Owl
Posted by Particulations at 16:28