Paths to Romance: A Psychogeographer Walks to Wuthering Heights

Last weekend I went up to Top Withins. As a true 'psychogeographer' should, I took photos of the signs. The following are the ones from the closest car park up to Top Withins itself. For anyone who doesn’t know, the walk begins very near to the village of Stanbury, which interestingly has as its Wiki page an image of a speed restriction sign:

Here is the wiki page on Top Withins. I love the fact the the sheep appears to have posed for the photo: Top Withens on Wiki

The first two signs I photographed are relatively early on in the walk. They are both stating that it is a private road and highlight the restrictions. They look like they emanate from different origins, even though they have the same text. The second one states that it is from Yorkshire Water and one can recognise the logo on it: 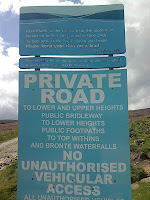 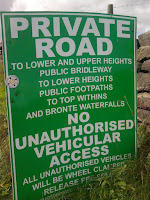 The following one was on a gate, saying that the camp site was closed. It is the 'height of summer' so I was a bit surprised, but I guess there could be many reasons why it was closed: 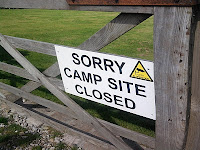 The next one was a nice carved stone for Upper Heights Farm: 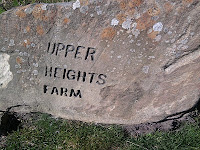 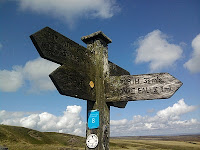 The final sign I photographed is the one on the wall of Top Withins itself. Placed by the Bronte Society in 1964: 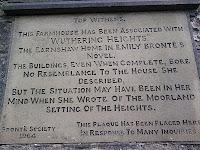 There were lots of people at Top Withins, many more than were there when I used to go in the 1970s. However, I was impressed at how well kept the area was: no rubbish at all, and it looked the same as it did 35 years ago.