In preparation for a psychogeographical expedition with the Design School students at the University of Leeds, I set off on August Bank Holiday Monday to do a 'reccy' of the Leeds Industrial Museum (nee Armley Mills):

Armed with my phone-camera but not my usual notepad, I checked out the online museum map before I left and also took my Leeds A-Z. 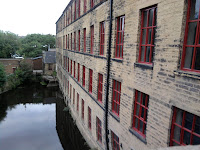 Could you tell me where the Industrial Museum is, please?

This museum must be the least well signposted museum in the UK. I did not see one brown signpost denoting cultural-places-of-interest until I was right outside the museum car park which was already well signposted. This may be because most people drive and then you would need to approach the museum from the opposite side than I did. I walked and entered from Kirkstall Rd. 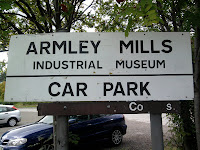 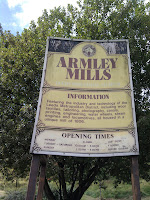 1) Enter Milford Place from Kirkstall Rd - well, I've worked out it was Milford Pace, going by my A-Z, but as you can see from the image below, the road sign seems to be missing. However, don't worry as it is the road opposite the Rising Sun pub and also there is a sign that points to Kirkstall Industrial Estate. 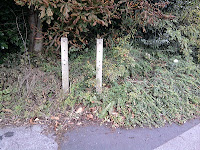 2) You will know you are in the correct road once you see this sign, about half way down on the left: 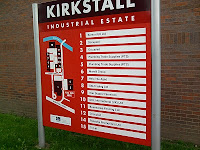 3) At the end of the road there is a narrow bridge slightly to the left. Here is the view from the bridge: 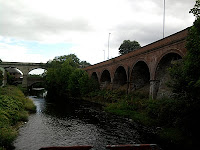 4) At the other side of the bridge go up the steps to the road: 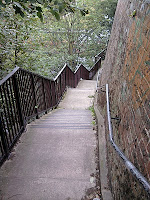 4) Once you get to street level, turn right across the bridge and keep right. The museum is a few yards along on the right.

5) There is a lane to the right of the car park which leads to the museum.

This plaque is outside the entrance to the museum and so are the painted metal bollards, one of which had a disabled parking sign on: 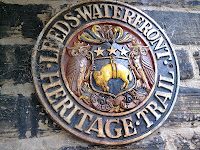 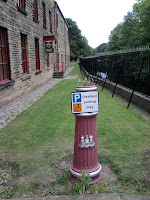 It is really cheap to get in, only £3.10 (max) and £1.60 for students! I got in for a student rate but the nice chap at the reception later said that, as I was doing a reccy, I could have got in for nothing. However, £1.60 is a bargain and we need to support our local museums in case the government takes them away from us!

You cannot take photos inside the museum, but do not worry, as by far the best shots for the psychogeographer are outside. I took one photo from the inside, of the fabulous chimney. Here it is alongside a shot of the chimney from the outside, notice the difference in the sky of the two shots, only taken a short while apart: 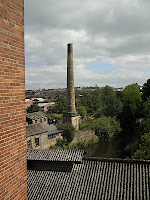 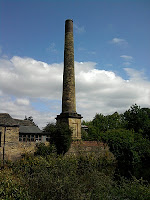 For me the 'Small Engine Room' was by far the most exciting section of the inside museum. Also, it was semi-outside, so I took this to mean I could take photos. The first picture is blurry, but I have kept it in as the machinery itself is so massive and interesting. Please just attach some artistic licence to the blurryness and pretend it was intentional: 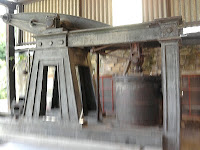 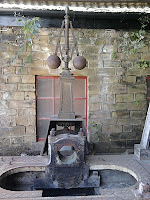 This wheel has also come out blurred, but I like it as it looks like it is turning. 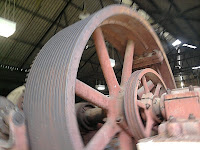 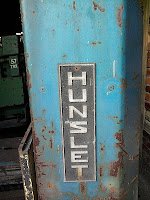 Hunslet was an engineering company and also the manufacturer of 'Jack' the steam engine that is located at the museum. Hunslet is also a region of Leeds and the engine company is named after it. The mini steam train is named Jack after Jack Lane, where the engine manufacturer was located in Hunslet.

Here is the wiki page on the Hunslet Engine Company:

Another engineering company located in Hunslet was J & H McLaren:

Here is a picture I took of Jack, just before he started moving: 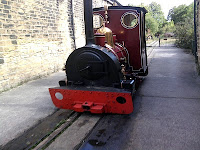 This is a blog/website dedicated to the area of Leeds called Hunslet: Hunslet Remembered

The following images are of the engines, or engineering-related equipment, that I took outside. The first one looks like waves made out of iron. The grill is strange-looking but I like it as it has a warp and weft (woven) look about it; very appropriate for a textile mill: 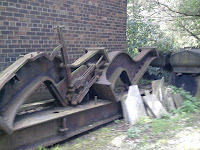 The situating of the the original mill on the Aire, and in particular on a bend where there was fast-moving water, meant that this site was perfect for the wheels that ran the mill. Here is a photo of the river, and some kind of sluice, inside the museum site: 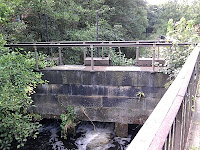 I don't know what this object is, but I like the shape and colour. It also looks like it is being caressed by the ivy: 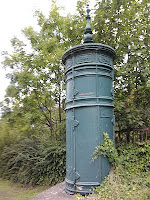 The nature/culture dichotomy is something I have written about in a previous blog:

The Disinhibition of the Persistence of Gaia

Here is a nice picture of a plant growing in the pointing of a wall on the museum land, along the same lines of the above blog: 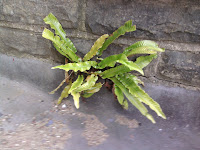 The following images are taken on the edge of the museum site, just before the steps that take you down to the river and back to the industrial park. The first picture shows some piping that runs parallel to the bridge that you cross to get to the steps. I like this image, with the pipes in the middle, the bridge one side and the trees the other: 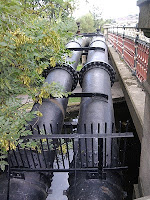 But, I think the following photo is my favourite image of the trip. I'm guessing this wooden outbuilding will either fall down or get pulled down at some point. However, in the meantime it potentially makes for a good composition. I have named it Water Shed: 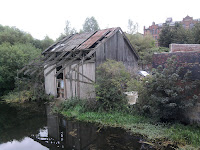 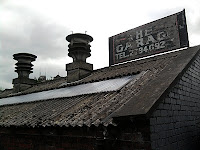 On the way home I didn't take too many photos as I didn't want to make this blog any longer than it already is. Here is a nice piece of paving(?) in Milford Place. I have called this image Chocolate Pavement: 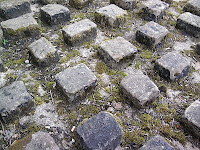 I bumped into a cat I know from working in the area a few summers ago. Her name is Mimi and here she is on the wall of her garden in Argie Rd. I like it when cats do that arched-back-cat-thing that they do when they rub up against something. Mimi is quite friendly, with a little bit of encouragement, and according to her owners she likes corn snacks: 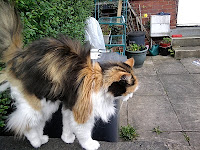 And, finally, here is a sign outside a convenience store in the Burley area: 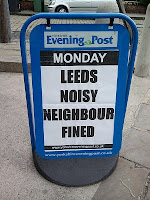 I enjoyed my mission to Armley Mills and would recommend it to anyone. I consider it to be one of Leeds best kept secrets. I know people who have lived here for years and have never been. Please buy the guide book when you are there, it is under two squid and will help keep the museum going. It also has some lovely images in it and a concise history of the mill. Also, coffee/tea is only 75p, although it is help yourself. I think you can take your own picnics and eat outside.

The area surrounding the mill is particularly interesting for psychogeographers as it runs along the River Aire and the Leeds and Liverpool Canal. These waterside areas often contain signs of our industrial past (and often present) and also conceal all those interesting liminal spaces. For a previous blog in the same area please click here:
Kirsktall Valley Subdub or The Prozac Walk

I would like to conclude with some quotes from the psychogeographer Iain Sinclair. They are very pertinent to how psychogeography can reveal the history in the palimpsest postmodern urban landscape. He states that the most hackneyed of objects appear intriguing when examined from a new perspective:
“These sites, come upon by accident, prick our imagination, provoke reverie.”
“When you don't see it, it is still there. And when you do, it is on the point of disappearance.”
From: 'A world you never new', 'Secret Britain', The Guardian, April 2009
Posted by Particulations at 09:46