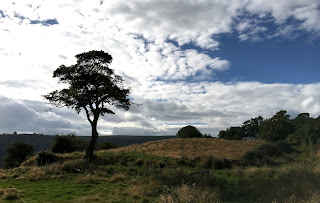 Yesterday, at the Llanthony Show, a middle-aged man in off-white overalls told us of the kill: a large woodpigeon torn to shreds in broad daylight, stripped of flesh and left bleeding, steaming on the hot road. I could smell its guts in the boiling air. Today, we are walking from the crooked church in Cwmyoy to the Cliffs of Darren, in search of the savage culprit. I’ve never seen a peregrine.

In the sixties, JA Baker wrote remarkably of these birds, navigating his Essex landscape – tedious to describe, but coloured with love – tracking a familiar falcon and tiercel pair by the feathery havoc left in the wake of their almost-cannibalistic hunting. It’s a psychotropic, metamorphic celebration of a brutal nature, and his words now seethe before me: “As soon as the hawk-hunter steps from his door he knows the way of the wind, he feels the weight of the air. Far within himself he seems to see the hawk’s day growing steadily towards the light of their first encounter.”

The Vale of Ewyas, I wrote when we first visited, might be derived from the large quantity of yew planted here to arm the bowmen of turbulent years past. Nine months on, I’m not so sure – the valley’s birds are its lifeblood, wild and prehistoric, beyond language. I like that “Ewyas” so closely resembles “eyas”: The Valley of the Eyasses. The Bloody Valley of the Beautiful Eyasses.

We set off from the church around five, leaving behind the bleating of a sheep we’ve just disturbed, like a clap beneath a bridge, and stride along what feels like a holloway, stamped and rolled into the earthy terrain by generations of ancient locals. It’s a haunting hundred-and-fifty-yard trek, and we do it in silence. The air is thick with manure and ghosts traversing their trade routes, their backs and shoulders cracked beneath the weight of living.

We turn left onto a narrow track that runs beside a wooden house, calling to mind the neat longboats that line London’s canals; it’s a cabin of sorts, and there are people there. Three women with dogs chew the fat, midges dancing like starlings in the slowly fading light. “Have you seen any peregrines?” we ask. They smile suspiciously and pause for thought. One, with an affirming bush of short grey hair, takes our fate into her hands: “That way.”

We push on into an uneven field, craggy and mole-ridden, and I veer off course, drawn by the allure of an uprooted trunk at the top of the slope. From this vantage, I have a clear sight of the Gaer and the stretch where the Stone of Revenge leans – our regular haunts. It dawns on me that I am treading a territory I have only ever seen from a distance. How strange and surreal it feels to be walking amidst the view; it’s as if we’ve been absorbed into a painter’s composition – perhaps a Turner. I am seized by colour and suspended in oil.

We descend a steep bank and cross an arid stream. I catch the scent, learned in childhood, of an animal carcass – of carrion. We arrive at the foot of the cliffs and wait: ten minutes, twenty minutes, thirty and forty. We pull grass from the ground and watch planes cut white lines into the sky, the clouds folding around us, the day drawing to its close. Then, without warning, the first call, like a child, penetrates our trance and we’re up, binoculars at the ready.

Here they come: one, two and three, emerging – all soot and cream – from a distance beyond the tops of trees. They stoop, one after another, and rise again, swooping from left to right and darting with a grace and precision I would not have believed. It’s over in less than a minute; in turn, they drop onto a dung-stained ledge and disappear, their shrieks abating – softer and softer, until the only noise is that of our baby’s mewl as she pulls away from her mother’s breast.