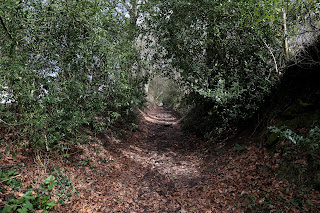 The Gospel Pass, or Bwlch yr Efengyl, runs from Abergavenny to Hay-on-Wye, or the Town of Books. It’s a narrow vein of a road that winds between two mountains, the Twmpa and Hay Bluff, and climbs almost 2000 feet into the air. This morning, from the car window, it looks like a scene from a horror movie – perhaps because we’ve just learned that An American Werewolf in London was part filmed here. Columns of mist like cirrus clouds, or wisps of geyser residue, slide in channels down the emerald mountainside, slipping between rocky outcrops and sheep.

We’re sat in the back and Chloe, my girlfriend, is resting her head against the glass, beads of luminescent rain pulling together and then apart like something scientific beneath a microscope. Her cheeks are flushed, her eyes heavy and her belly full of life.

This is a landscape rich in art and literature: not far away, Watkins mapped and marched his ley lines; Machen dreamt his gothic visions; Iain Sinclair tore himself from Hackney for Landor’s Tower; and, of course, Eric Gill took residence in the former monastery at Cappel-y-FFin. I’ve mentioned Ginsberg, and I recall reading Bruce Chatwin’s beautiful On the Black Hill at the nearby Green Man Festival, immersed in its desolation and gentle triumphs. A year later, caught in a torrent of dark valley rain, we watched Super Furry Animals sing of an oppressed mountain people. Turner painted here, and it’s easy to see why.

As we roll over the pass, I imagine the artist – not quite as large or gruff as Timothy Spall – in a horse-drawn carriage, clattering through history. Two kites dive for prey, baring their bloody breasts, the windscreen a movie theatre. Early-bird cyclists in yellow and green Lycra are catching worms, trading the road for a loosely contained arable wilderness. We smile as the light shifts and the mist gleams with an ecstatic lustre. This is a place of deep time and memory, of Deep Magic.

In Hay, we walk for hours. We buy meat and drink coffee on a raised platform in the centre, enjoying the crowds. We browse antique shops and pick up an encyclopaedia of British birds. I buy first editions of Lydia Davis, Michael Chabon and Ginsberg from a shop I’ve come to know quite well. I’ve also bought collectible books here by Seamus Heaney and WG Sebald; I’ve toyed with Kilvert’s diaries – only really because of the pub round the corner named after him, where I’ve sunk delicious pints of fruity amber ale.

Back at the farm, I take in the view of the Skirrid and think of Owen Sheers – this is his territory. I see mole traps and recall, for some reason, Cynan Jones’s sparse and ferocious novel The Dig. In the evening, I place my new books on the carpet by the roaring fire and watch as the flames ripple and dance on the front covers. An owl calls from the barn. We sleep.