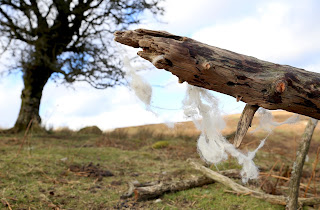 It’s a cold, bright morning at the foot of the Black Mountains. My girlfriend, her parents and I walk along a stony track beneath an arc of brown and purple larch. Our steps splash in the flow of a shallow stream, which for this stretch alone is at one with the trail. A slight man, grey and elegant in a wild sort of way, approaches from behind and initiates gentle conversation. He comments on the crisp weather and tells us about his roots in North Wales, before delving into the years he spent in East London; he talks about his family in Hackney and a clothes factory relocated to Abergavenny.

As we speak, shafts of golden light peter through the sparse foliage and catch on our precautionary waterproofs. The old man is wearing a black Leninist cap and he leans on a stick that he’s smoothed, dried, oiled and tipped with metal. I ask him the way to the slanted church in Cwmyoy; he beams and takes the lead.

We emerge from the cover of trees into a farmer’s field peppered with evil-eyed sheep. A murder of crows erupts from the crown of an ash in the distance, while our chatter rumbles on. The ground is sopping with last night’s deluge and we struggle, at times, to stay afoot. Across a road and river, we join a lane leading up to our destination: St Martin’s Church, a medieval structure that tilts askew due to debris caused by the glaciation of the Llanthony Valley. A bird with a crimson tale, perhaps a rogue black redstart, sweeps from one side of the pathway into thick hedgerow on the other, just metres ahead.

In full view, the church looks like an image from an illustrated work of gothic literature. Its fluid shape dips and shifts and sinks like a river current, its grounds crooked with ancient gravestones; buttresses built in the 1960s prop up the leaning tower. Looming behind is a mountain split in half by a landslide that was caused, rumour has it, by a violent earthquake that cracked through the valley during the crucifixion of Christ.

We remove our jackets and rest our poles against the porch wall. Our guide slips quietly through the church door before us. As we enter the main room, the owl-like song of an accomplished flautist rises from the pews and swallows us whole – the old man, like CS Lewis’s Tumnus, controls the mood, adding anaesthetic to an already-reverential atmosphere. Monuments carved by the famous Brute family adorn the walls. One reads: “Death, like an overflowing Stream/ Sweeps us away, our lifes a Dream/ An emty Tale; a morning Flow’r/ Cut down & wither’d in [an] hour.”