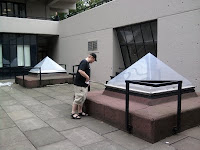 Below are three psychogeographical films about the University of Leeds. They form part of a growing schizocartography of the campus.

This animated map is appropriated from the Situationist map by Guy Debord called Axis of Exploration and Failure in the Search for a Situationist "Great Passage" (1957). My map is based on the recent education-related strikes in Leeds, in particular at the University of Leeds and Leeds Metropolitan University in the last year. My own image takes sections from various University of Leeds maps, it includes a photo I took of the J30 strike in June.

The Situation at the University

"Our central purpose is the construction of situations, i.e. the concrete construction of temporary settings of life and their transformations into a higher passionate nature. We must develop an intervention, directed by the complicated factors of two great components in perpetual interaction: the material setting of life and the behaviours that it incites and that overturn it." Guy Debord (Situationist International) 1957


The Sound of the Sixties

This 3 minute film is an acoustic psychogeographical response to the area called the precinct at the University of Leeds represented by the architecture of Chamberlin, Powell and Bon. The film features two of the most impressive of the buildings designed by the architects: the Worsley Building and the Roger Stevens Lecture Theatre (now a Grade II listed building). It alludes to a moment-in-time architecturally, with the popular cultural reference of the title - The Sound of the Sixties, a radio and TV series playing pop music form that era - and the 1964 track by the R&B British pop band Manfred Mann. The song title 5-4-3-2-1 provides a countdown to the walk, which was actually 8 individual edited films, appearing in the sequence they were recorded.

So as to avoid being distracted by the campus scenery only the feet were shot, they being the instrument used to tap out the sound on the surface of the topography of the precinct. I considered just supplying the sound without the visuals of the walking feet, but I decided that the trace left by the feet becomes a form of cartography which has a number of functions that to me, as a psychogeographer, are important, and which also support the tenets of schizocartography.
Posted by Particulations at 11:48