Austerity & the University of Excellence Part 1 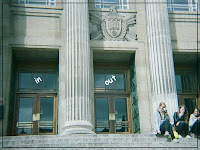 The Parkinson Steps at the University of Leeds.
Image CC Tina Richardson

During modernity the university's relationship with commerce grew out of a direct response to an economic need, whereby the university reacted to demands for a certain type of knowledge requirement. In postmodernity the university has acquired the mantle of a business-oriented philosophy in its own right, this means that attempting to demarcate industry and institution as separate entities is far more complex. In order to compete in a globalised market the contemporary university is expected to think and operate as if it were a business: it has to take up the procedures and practices of commerce.

What this means for the university is that in its corporate incarnation it is essential that it becomes part of the globalised marketplace and in that move adopts the modes of operating that capitalism endorses. It needs to involve itself in the transfer of capital within society both at home and abroad. The university does this in a number of ways, from its relationship with industry in its vocational courses, to research that directly benefits business and technology.

However, even as far back as 1990 academics were writing about the negative aspects of applying a commercial formula to every aspect of education. In her essay ''Hard' Decisions and 'Tough' Choices: The Business Approach to University Decline' Cynthia Hardy says:


The tough choices advocated in business literature are likely to escalate the political conflict that surrounds declining resources, not resolve it. Draconian measures - terminations and program closures - can send shock waves through the university community. The more marketable individuals will leave to find less hostile surroundings; potential recruits will resort to political infighting, as they try to protect their departments. (1990: 317)

I provide this illustration not because I think academics do not know this already, but because I wish to emphasise that this current period of austerity is situated within the greater issue of how organisations operate under neoliberalism. And, not just organisations, but individuals also. We no longer look to the nation-state for our sense of cultural identity, nor the modernist university, but to the High Street. We are first and foremost consumers.

This is how Mark Fisher puts it: "Capital follows you when you dream. Time ceases to be linear, becomes chaotic, broken down into punctiform divisions. As production and distribution are restructured, so are nervous systems." And Félix Guattari would agree. He believes that while we have many subjectivities available to us, the prevailing consciousness is a capitalist one. He says that capitalism works in such a way as to prevent anything that is antithetical to its project from taking hold. The signs that capitalism creates discourage any singular processes of individuation and attempt to reroute subjective desires back into capitalist production: this is anti-production, and here Guattari situates it in the context of education:


It is impossible to separate the production of any consumer commodity from the institution that supports that production. The same can be said of teaching, training, research, etc. The State machine and the machine of repression produce anti-production, that is to say signifiers that exist to block and prevent the emergence of any subjective process. (1984: 34)

So what are we to do if this is less to do with the current crisis and more to do with 'the postmodern condition': the restructuring of education under neo-liberlism and the prevalence of a capitalist consciousness?

Because the university needs to reduplicate itself internally, and also express that reduplication externally, what this means for the university is a spectacle-like appearance in the form of signs that appear as representable data, the output of the excellence process. These signs present the university in the guise of what Guy Debord would describe as "commodity as spectacle". Debord explains that the spectacle is "where the tangible world is replaced by a selection of images which exist above it, and which simultaneously impose themselves as the tangible par excellence." This is problematic for the university because it means it is removed from its original idealised functions - the pursuit of knowledge, high quality academic research, education for all, etc. Readings believes that the university as a concept no longer has any content: "The University of Excellence is the simulacrum of the idea of a university". And while this might sound negative, or even hopeless, herein also lies the possibility for it to be remade under a different concept; as Readings says "the wider social role of the university is now up for grabs".

In a time where grand narratives no longer hold sway, where culture and ideology is decentralised and where the once autonomous subject can even be argued to be posthuman, we need a different model of consciousness to help us negotiate the postmodern terrain and those institutions that are manifest in them. This is well-noted by Frederic Jameson in Postmodernism, or the Cultural Logic of Late Capitalism when he calls for a new cognitive map:


It may now be suggested that this alarming disjunction point between the body and its environment [...] can itself stand as the symbol and analogon1 of that even sharper dilemma which is the incapacity of our minds, at least at present, to map the great global multinational and decentered communicational network in which we find ourselves caught as individual subjects. (2009: 44)

This is echoed by Fisher when he states: "To function effectively as a component of just-in-time production you must develop a capacity to respond to unforseen events, you must learn to live in conditions of total instability, or 'precarity'" (2009: 34)

So, if we are to believe that a predictable future is unavailable to us in this simulacra-like university that is inseparable from these global networks, how do we find the university of tomorrow?

Related link: Austerity and the University of Excellence Part 2