At UCLA You See LA

I went to the University of California, Los Angeles on the weekend of December 4th and 5th to the Spaces and Flows conference Being a psychogeographer, I was very excited to be able to walk in a totally new kind of urban space. This was my first visit to an American University and to the US. This is my blog on UCLA:

Just having logged into the university site, I find that a high level article is discussing how recent research is using GIS to map geographic areas where fastfood is located, and comparing this to public health.

I also found this great map in the Daily Bruin (the UCLA newspaper), while I was there. It comes under the heading Crimewatch and maps the crime in a one week period on campus. These are my favourite crimes:

"On Nov. 27, a man yelling at security officers was escorted from the Doris Stein Eye Research Center."

I'm not exactly sure why I like this one, and why it makes me laugh. I think it's the specificity of the place name and the possibility that the chap may simply have been poked in the eye by a researcher.

"On Nov. 22, marijuana was confiscated from behind Canyon Point."

Well it is a university campus after all. What more can I say. If there wasn't any marijuana (or, by the way, illegal alcohol - it is a dry campus), I would be concerned.

The campus at UCLA is pristine, elegant and I would even say beautiful. Most of the buildings are of the style in my above photo, and like the ones below:

However, the campus does not seem to have a lot of 'character' probably because the architecture is not diverse enough to enable that. There were some modernist buildings as well, but most buildings were similar to the style of the ones above, built with the pale salmony-pink brick. It tended to give the campus a homogeneous look - which I guess some will find attractive and some not.

This section of my blog looks at the usual psychogeographic urban phenomena that I tend to observe, and I will include a series of photos with short comments.

The university staff (maintenance, etc) seemed to have access to these buggies to enable them to move effectively around the space. I even saw a student with a suitcase on the back of one at one point:

These lovely little signs appeared on the pavement outside the sports stadium. I assume they guide the supporters to their terraces. The university mascot is a bear (Bruin the Bear, actually its called Joe). However, I would like to challenge that and propose that the lovely mango-tummied squirrels replace the bear. The Fox Squirrels are all over the campus. See my future blog for more images on the UCLA squirrels.

These signs were outside the Ackerman Union. They even remained overnight. Although they were located only in one specific area, I got the feeling that they would not be allowed on the University of Leeds campus, unless it was for a specific one-off event.

I was handed this document outside the union. 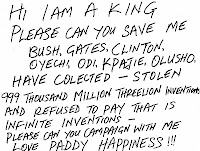 The following three images are of various types of pipes, although I don't know what the first one is. The last two were on the periphery of the campus. I really like the blue and red pipes next to each other. 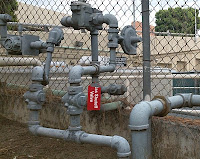 I also found this 'No Dumping' notice on one of the roads surrounding the campus. I like these signs that are made of concrete and situated on roads and pavements. They are less dominating and aggressive than vertical signs. I've never seen any like this in the UK.

This is the UCLA Guest House, where I was staying, and below that is an interesting church that was very near the campus.

What I found particularly interesting is that on one level at least, UCLA reflects the way that LA operates spatially. There does not seem to be a centre to the UCLA campus. There was not even a central administration building that I could find where I could get information about the campus. I asked people but no-one seemed to know. Also, there is no main entrance, like for instance, there is at the University of Leeds (the Parkinson Building and its famous steps). There was only a number of insignificant entrances which were oriented around LA's favourite object: the car. Here is one:

The entrances were not designed for the person entering on foot, as they all lead to car parks. Nor were they designed as symbols of the university that may represent a brand, as indeed the Parkinson Tower does for the University of Leeds: University Tower

Note the tiny tower symbol on the logo:
University of Leeds

UCLA, like many campus universities is a mini city. But it is not a mini city in the conventional sense, it is much more like the Westin Bonaventure in its postmodern disorientation. The university buildings and those in the surrounding area, bleed into each other and do not appear clearly on relative sides of the distinctive boundaries like they do on the map provided online: UCLA campus map

I have walked around the periphery of the University of Leeds campus, and there is a much more clearly delineated line where the campus ends and begins: The Forgotten Solo Dérive

I wanted to sign-off with a really juicy and appropriate quote from someone like Baudrillard, or maybe find an entertaining youtube video about campus life. Most of what I found on youtube were really gushy films that I just couldn't subject anyone to; some were university marketing department created ones. Anyway, I don't even think this one is ironic. I thought it was at first, but then, reading the responses, I doubt it. But it is worth looking at as it is the most creative and interesting of the ones I found:

This is Tina Richardson, situated in a studio flat in Headingley, signing-off...