The Good Adventure: A Psychogeography of the Westin Bonaventure

Before I went to LA this month, my only impression of the Westin Bonaventure Hotel in Downtown LA was based on the text of Frederic Jameson: Postmodernism, or the Cultural Logic of Late Capitalism (1991). In his critique of postmodern architecture he uses the hotel as an example:

"...the Bonaventure aspires to being a total space, a complete world, a kind of miniature city; to this new total space meanwhile, corresponds a new collective practice, a new mode in which individuals move and congregate, something like the practice of a new and historically original kind of hypercrowd." (2009: 40).

What a perfect place to do some urban walking!


The Entryway is Always the Seam That Links the Building

"In this sense, then, ideally the minicity of Portman's Bonaventure ought not to have entrances at all, since the entryway is always the seam that links the building to the rest of the city that surrounds it: for it does not wish to be a part of the city but rather its equivalent and replacement or substitute." (2009: 40).

As I was walking to the Bonaventure I entered it at street level. When approaching the hotel it was difficult to get a good shot of it, as it's surrounded by flyovers and, as you can see from my first photo, trees. The point I entered was on South Figueroa Street. You don't really feel like you are entering a hotel as such, because really it isn't just a hotel. The section of the building you enter from there is not even shown in the image on Wikipedia. The top section - the shiny glass tubes - is floor 6 upwards. Floors 1-5 feel like they are underground, although they are not. They are the concrete base, which appears under the ground of what you see in the image. The top of this section forms its own outside floor, where the swimming pool is located. Here is the swimming pool, and below the image I took of the building from that level:

It is Our Pleasure to Welcome You as a Guest

This is how the little booklet of the hotel opens. It lists the facilities, services and eateries that belong to the hotel, including a revolving cocktail bar on floor 35 (the lift wouldn't take me there at the early time I went, though). But alongside the hotel services are many others provided by retailers that are not part of the hotel - because it is also a shopping centre. I even found a actual brewery right near the swimming pool.

The building is so complex that there are two massive illuminated displays that provide information on what is to be found in this giant minicity:

There are signposts, that look like street ones. They are colour-coded (if it is not apparent from the image, this one is yellow):

This is the floor plan, which shows a horizontal slice through the building.

Apparently this is how Portman described his elevators: "people movers". The four glass tubes that surround the central tubes, all have their own lifts. Each tube is not only colour-coded but also shape-coded. For example, the one below is green and square. This sign appears outside the relevant lift:

"...it seems to me that the escalators and elevators here henceforth replace movement but also, and above all, designate themselves as new reflexive signs and emblems of movement proper..." (2009: 42).

There are staircases, which are very apparent in the concrete base section. I'm not sure what they appear like above this level though. Below is a photo from under one of the staircases:

Since people don't tend to take stairs, and are not even encouraged to walk in LA in general, I was a little concerned that my behaviour may draw attention. But, I think because this place is not purely a hotel, anyone could potentially be there for a number of reasons, i.e. you don't have to be a hotel guest or hotel staff to be in the building.

"...recent architectural theory has begun to borrow from narrative analysis...to attempt to see our physical trajectories through such buildings as virtual narratives or stories, as dynamic paths and narrative paradigms which we as visitors are asked to fulfil and to complete with our own bodies and movements." (2009: 42).

The Westin Bonaventure is only the second building of which I have done an internal urban psychogeographic walk. The first one was the Union Church in Hunstanton: A Journey Around My Church However, this hotel lends itself perfectly to the psychogeographer because of the complexity of its space and the multiplicity of its signs; and, here, I mean literal signs. How fortunate I was to find that part of the building was under construction and, as with outside urban space, had all the relevant notices on display. Although the grey 'branded' ones were a little more stylish and more polite than the ones provided by the British Highways Department:

Here is a rather unfriendly sign I took near Kirkstall Electricity Substation in Leeds, UK. Please click here for the relevant blog: Kirkstall Valley Subdub or The Prozac Walk 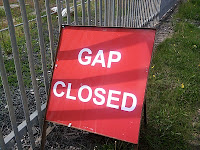 "So I come finally to my principal point here, that this latest mutation in space - postmodern hyperspace - has finally succeeded on transcending the capacities of the individual human body to locate itself, to organize its immediate surroundings perceptually, and cognitively map its position in a mappable external world." (2004: 44).

Most of us (in Cultural Studies, Postmodern Philosophy, Sociology, etc) are aware of Jameson's famous plea for the need for a cognitive map to help the postmodern subject navigate the urban (and psychic) domain. However, some of us relish in the profusion of reflexive signs (Baudrillard), the Spectacle (Debord) and our decentred place in a society that no longer has a cultural identity for us to pick up and put on, rather like a hat (Lyotard). Urban space may be confusing, it may be overcoded, it may even be psychologically distressing. Nevertheless, it is historically rich and culturally abundant, and maybe the best we can do is appreciate its complexity by attempting to spatially navigate it. By situating our physical bodies in these spaces, the osmotic effect makes them become benign and familiar. We no longer see urban space as something 'out there', but become connected to it in the most basic of ways: through the physical act of ambulation.

Bibliography:Jameson, Frederic. 2009. Postmodernism or The Cultural Logic of Late Capitalism (London and New York: Verso).
Posted by Particulations at 14:26