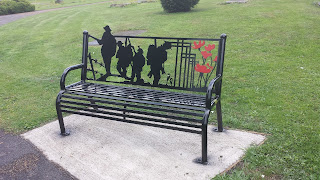 Please click here for part 1 and part 2 of the blog.

Despite these criticisms (which I do actually consider to be constructive to discussion, even if the actual criticisms themselves are negative ones), I believe psychogeography brings something useful forth. In particular it draws attention to overlooked places (often these liminal spaces criticised by Owen Hatherley). In a series of articles in the Guardian newspaper in 2009 called 'Secret Britain' Sinclair explains the affect of stumbling across these types of places:


These sites, come upon by accident, prick our imagination, provoke reverie. Questing for one story, we blunder into another: we must train ourselves to expect the unexpected. The thing hidden behind a high wall is still part of our true 'legacy', but buildings and sites sometimes have to wait to achieve a haunting dereliction, to become legitimate targets for vulgar curiosity. That's how the Secret Britain guide philosophy works: when you don't see it, it is still there. And when you do, it is on the point of disappearance. (2009, 5).

As the ‘Secret Britain’ article demonstrates, the homogenising effect of neoliberal space coupled with signs that prohibit action and entry at every turn, discourage our questioning of how urban space got to be the way it is. One needs to de-familiarise these spaces for them to be seen clearly for the first time. David Prescott-Steed discusses this de-familiarisation in regard to the dérive, although what he says applies to any critical form of urban walking: “de-familiarisation not only fosters critical thinking but, furthermore, finds it manifest in the form of a creative negotiation” (2013, 75). He explains why the dérive has been useful as part of his own practice. In connecting critical thinking to the physiological act of walking he believes this makes “theory actionable” through “praxis” (2013, 72) and it is formed through “the application of a theory to everyday activities” (2013, 81). This is somewhat echoed when Rebecca Solnit says: “Walking the streets is what links up reading the map with living one’s life” (2002, 176).

One of the most engaging things about psychogeography, or even urban walking in its broadest sense, is that anyone can do it. Since most of us in Britain live in urban space, 82.4% as of the 2011 census (Department for Environment, Food & Rural Affairs 2013, 1), all we have to do is open the door and step into it.

Even if you do not carry the walk out in any critical way, simply thinking about the physical act of walking, and the somatic sensation of thoughtfully connecting oneself with the ground, turns the walk into something entirely different from a regular stroll. Your walk has then become a form of critical psychogeography: “Walking has created paths, roads, trade routes; generated local and cross-continental senses of place; shaped cities, parks; generated maps, guidebooks, gear, and, further afield, a vast library of walking stories and poems, of pilgrimages, mountaineering expeditions, meanders, and summer picnics. The landscapes, urban and rural, gestate the stories, and the stories bring us back to the sites of this history” (Solnit 2002, 4). This quote by Solnit, reflects the complexity of the relationship between urban space and walking, in particular in regard to texts on the city. The output of walking in the form of, say, maps and stories cannot be separated from our own impressions of the city itself.

Related Links:
Iain Sinclair in Walking Inside Out – Extract
Lose Yourself in Melbourne – David Prescott-Steed

Email ThisBlogThis!Share to TwitterShare to FacebookShare to Pinterest
Labels: David Prescott-Steed, Iain Sinclair, psychogeography, the dérive, the new psychogeography, The Theory of the Dérive