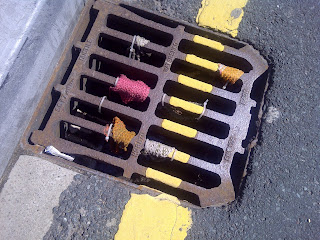 In recent times there have been what could be described as forms of low-level snobbery that have sprung up around psychogeography. For instance, for a reason I do not particularly understand, Will Self's column-turned-books on psychogeography have been harshly judged. Many people do not consider Self to be a psychogeographer, although it is unclear why. He certainly travels urban spaces on foot and also brings a personal perspective to his walks, so this may be more to do with a dislike of his media profile as a broadcaster/writer than as a psychogeographer. Sinclair, too, does not consider Self to be a psychogeographer, but he does not consider himself to be one either – so I appreciate something else might be occurring there. This is what Sinclair said to The Guardian journalist Stuart Jeffries in 2004: “For me, it's a way of psychoanalysing the psychosis of the place in which I happen to live. I'm just exploiting it because I think it's a canny way to write about London. Now it's become the name of a column by Will Self, in which he seems to walk the South Downs with a pipe, which has got absolutely nothing to do with psychogeography. There's this awful sense that you've created a monster” (cited in Jeffries , 2004).

In the same interview the writer and co-expounder of London history, Patrick Wright, is quoted as saying of Sinclair: "I don't care about Iain's hokey-pokey malevolent stuff", however, he praises Sinclair's work overall and its critique of Thatcherism's colonisation of space in the East End (cited in Jeffries, 2004). Wright’s criticism is levelled at Sinclair’s occult writing, though, but the language, nevertheless, is derogatory. Even if there is some elitism around what criteria should be attached to someone in order to classify them as a psychogeographer, attempting to locate a definitive criteria is not easy.

There also exists disapproval directed at the broad field of psychogeography. The most recent outspoken criticisms seem to be from Owen Hatherley. For instance in Tough Crowd in 2010 he said (in relation to his, at the time, new book): "I don't want Militant Modernism to be totally associated with the psychogeography industry that's around now. There are no ley lines in my books, there's no pentagrams" (2010, 32). I do find this somewhat presumptuous: a form of psychogeography practiced by one person is invariably different from that practiced by the next. I also feel there might be a slight flavour of high-handedness against the people he is alluding to here. Also, what, exactly, does he mean by "the psychogeography industry"? If he is referring to the co-opting of psychogeography by the marketplace, this is a criticism that should be levelled at the marketplace, not psychogeographers. In The London Review of Books, he brings up the subject again when discussing Jonathan Meades' book Museums Without Walls. He says: "However, unlike Iain Sinclair or the London 'psychogeographers', with their taste for pathetic fallacies and loathing for anything remotely new, Meades does not fetishise spaces between" (2013, 27). So, it seems, psychogeographers are also being 'called to task' for their discussions on liminal spaces.

Geoff Nicholson also has levelled some pejorative comments at psychogeography, although they are aimed rather more at the Situationists (as is the case with Rebecca Solnit) and some of the experiences he has had when attending specific events, such as the New York Conflux festival, where he attended a Situationist-type walk made by drawing around a martini glass on a map and following the route, of which he concludes: “It occurred to me, not exactly for the first time, that psychogeography didn’t have much to do with the actual experience of walking. It was a nice idea, a clever idea, an art project, a conceit, but it had very little to do with any real experience of walking, And it confirmed to me, what I’d really known all along, that walking isn’t much good as a theoretical experience” (2010, 150).

Doreen Massey also directs criticism at the Situationists’ perambulations in For Space (2005): “At its worst it can resolve into the least politically convincing of situationist capers – getting laddish thrills (one presumes) from rushing down dark passages, dreaming of labyrinths and so forth. (Is this not itself another form of eroticised colonisation of the city?)” (2005, 47). This expresses the often masculine approach to a particular form of psychogeography, also the colonising aspect already discussed in the introduction. Not that I would dismiss these “capers” outright. While they might not be considered critical in any way exploring our towns and cities in a way that opens up the space to us in a productive way, and that responds to our inner desire, is a form of self-expression and could be considered a counter strategy to the dominant signifiers that abound in urban space: “It doesn’t matter what the motivation is. What matters is that in each instance a kind of motivation nevertheless exists. It is that expectation in mind that informs which route we will take and, in this way, what we will see along the way to achieving it” (Prescott-Steed 2013, 45).