I’ve recently watched two psychogeography/urban space films that I really enjoyed. They are Le Pont du Nord, recommended to me by Geoff Nicholson, and Urbanized which I found online while looking for films about postmodern architecture. I’d like to tell you a little about the films, and also provide you with further information. 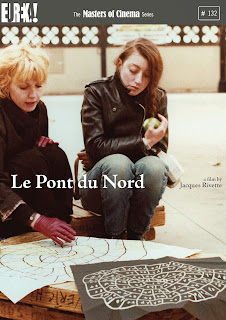 This rather quirky, post-French New Wave film starts of a bit slowly but because of its peculiarity you feel compelled to continue, which is well worth doing, especially if you are interested in the city or are a psychogeographer. Starring a mother and daughter (Bulle and Pascale Ogier) we see their characters form a strange relationship in the cityscape around the playing out of an urban game and clandestine chance meetings with strange characters in abandoned spaces. And…the film has the mandatory psychogeographers’ rucksack in it, too!

The special edition includes a super booklet with lots of information about the film and also some interviews. This is what Serge Daney says about the film:


Le Pont du Nord is also in fact a political thriller with a hunt for a woman and an urban setting, a documentary on the state of Paris in 1981, an old modernist film composed out of an incomplete and undecidable tale . . . One should see it like one slides a finger (nervously) along a dial in order to tune in to free-radio stations. Free, that’s what the film is – Rivette is the needle, and we are the dial.

I didn’t know the actresses, so looked them up online. Tragically Pascale Ogier died of a drug overdose a few years after making this film. It seems she was a talented actress and at the beginning of a promising career. 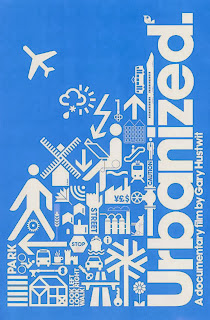 It’s nice to see a documentary film about urban space and architecture which doesn’t feel Anglo-centric (I mean this more in relation to the style of the film, rather than the places discussed). By the independent filmmaker Gary Hustwitt, it takes a rounded look at urban space, housing and planning. I guess on some level it is about people, but I suppose films about urban space always are, since we are the colonizers of macro space. One of the speakers says “Urban design is really the language of the city”, which reminded me of Roland Barthes’ essay ‘Semiology and Urbanism’: “The city is a discourse and this discourse is truly a language: the city speaks to its inhabitants, we speak our city, the city where we are, simply by living in it, by wandering through it, by looking at it.” (2004: 168).

This is what Hustwit says about his film:


Before I started with urbanized I spoke with architects, city planners, academics, and developers. I went to conferences about urban issues, and soaked up as much information as I could about the state of cities today. For two and a half years, I filmed conversations with people who I thought were doing compelling work, and tried to document their creative processes.

You can click here to go to the website that includes information about all the films in the trilogy: Helvetica/Objectified/Urbanized
Posted by Particulations at 10:55