The Psychogeography of Academia or…

...Negotiating Your Way Around the Hellish Academic City Centre Loop! 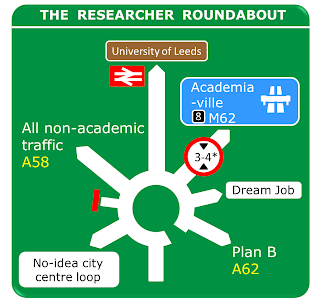 I got an email from the Staff and Departmental Development Unit at the University of Leeds this week, announcing a new programme of training for researchers at the university. This is the graphic that accompanies their new programme. It had an interesting effect on me, being both a psychogeographer but also a (pre)academic who is about to launch oneself into the academic market. The aesthetics of the image is intriguing and I wish I had the time to do a proper deconstruction of it, like I have with a number of university images, however I’ll just stick to my initial reactions, which were:


1 – What an interesting ‘logo’ to choose. The bold primary colours make it jump out at you. The image is well thought out, funny and pertinent. ‘Who came up with the idea?’ I thought. And, of course, because I am a psychogeographer, I found it quite delightful.
2 – But then I saw ‘No Idea City Centre Loop’ opposite ‘Dream Job’ and my heart sank. Not least because of the terrible market for higher education jobs, but also because of the university lecturers’ strike this week. How disheartening!

Recently I subscribed to Times Higher Education, which is the most depressing magazine for a pre-academic to read. And, it is not like some magazines where you only get one a month. It is weekly. So once a week I sink into an existential crisis, just pulling myself out of it before the next week’s edition arrives. Only a masochist postdoc would enjoy putting themselves through that weekly.

While it is a really well-written/edited interesting magazine, it does contain a lot of articles like:

‘Failure is an option as US enrolment stagnates’
‘Politicians, don’t bury your heads in the sand, cautions Andy Westwood: the fees issue will have to be revisited eventually’
‘Use genuine all-rounders to eradicate zero-hours contracts, Philip Roddis advises the academy’

...I do appreciate this just reflects the market, but it nevertheless requires endless bootstrapping to keep one’s self-esteem up, especially after 9 years of academic training and the relinquishing of all financial security – something I am beginning to think was extremely foolhardy for a middle-aged new academic to do.

Historically I have been inventive in job-hunting and some of my best positions I actually got by myself and were not even advertised jobs. In one, after having a bad day at work, I walked in off the street to a company’s head office and asked them for a job, and they gave me one there and then. In another job – my best paid and most enjoyable job to date – the company created a position for me after receiving my letter in the post. Academia does not work like this though. Since it is the ‘public’ sector there are processes that have to be adhered to. My ‘entrepreneurial spirit’ does not seem to apply in a system of tick boxes, key performance indicator-like structures and over-worked lecturers who can barely keep on top of their work, let alone respond to my speculative letters (although some of them have – a 25% return so far, pretty good). Not that I am job-hunting in earnest yet, having not quite submitted my thesis, but I am doing job-hunting research, one could say...

The most worrying thing, I am finding, is the demise of the very subject that got me interested in becoming an academic in the first place – Cultural Studies. I fell in love with it on my ACCESS course (A-Levels for mature students). You can’t even study Cultural Studies at A-Level in school, but you can at a Further Education college if you do an ACCESS course. Within 5 weeks of the course I knew that this was what I wanted to study for my BA. It was as if someone had created Cultural Studies just for me. I wanted to become a Cultural Studies lecturer. But the subject – especially as a ‘pure’ subject – has dwindled during that time. That, and the lack of undergraduates wanting to take the degree since the course fee rises, means that the subject is being abandoned around the country, being paired up with other subjects, or is awaiting a rebranding exercise of some sort (if anyone wants a Programme Director to rebrand their Cultural Studies degree, I’m your woman).

So, I am on that roundabout above, going around in circles, trying to avoid ‘No Idea City Centre Loop’ and hoping I will eventually get off at ‘Dream Job’! As the psychogeographer said: Watch this space!
Posted by Particulations at 14:22