The Students are Revolting

This week I came across the Situationist International inspired document On the Poverty of Student Life created by the students of Strasbourg University in 1966. It opens thus: "It is pretty safe to say that the student is the most universally despised creature in France, apart from the policeman and the priest." I also found a really interesting recently reworked version of this document from 2006 It comes in a handy pdf format and was reproduced and distributed at the eindexamen exhibition of the Rietveld Academie in Amsterdam.

The recent student protest in London (9 November 2011), in regards to tuition fees, spawned placards that stated "Scrap Tuition Fees" and "Free Education". And, according to the Guardian newspaper, chants included "David Cameron – fuck off back to Eton". While reports say there were 4,000 police on the streets, the protest 'passed off peacefully'.

Paris in May 1968 showed a different picture, when the students came out in support of the workers. The students and the authorities had been in conflict for months leading up to this event. Slogans said "The more you consume, the less you live. Commodities are the opium of the people." and were accompanied by Situationist graffiti. 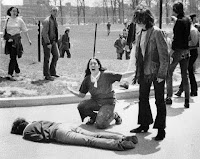 The above is an iconic image from May 4 1970. This student, from Kent State University, was shot and killed by the Ohio National Guard along with three others. Consequently this became known as the May 4 Massacre. While this protest was over the US invasion of Cambodia, the strikes that followed involved a nationwide closure of universities and colleges. 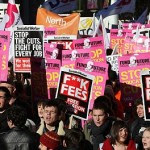 I wasn't sure when the next upcoming student protest was in the UK, so I typed 'next student protest' into google. I found a student website where students were asking the same question. One answered: "Not sure... I hope the police know in advance so they can be ready with their water cannon and student-eating dogs." Someone else had also voted for this remark. However, I think it is the 29th January 2012 in London.

The next public sector strike is Wednesday 30th November when university lecturers will also be striking.

Email ThisBlogThis!Share to TwitterShare to FacebookShare to Pinterest
Labels: May 1968, May 4 Massacre, On the Poverty of Students, situationist international, Student Protests